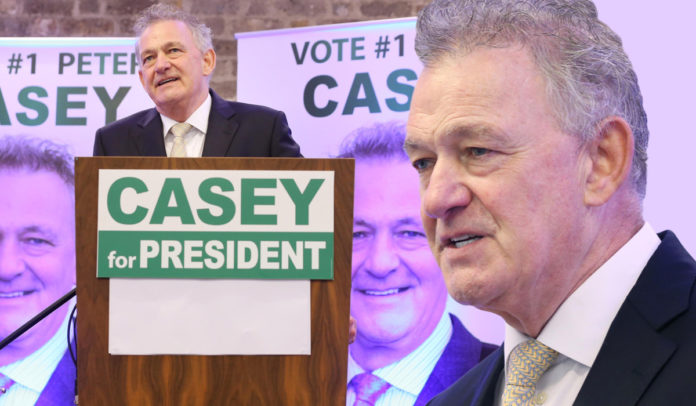 Presidential runner-up Peter Casey has said he will stand in the next general election in Donegal and top the poll.

And although Fianna Fail has appeared to distance themselves from the Greencastle-based businessman, he says he needs to align himself with a party.

He made his comments on RTE’s Today With Miriam Show after claiming 23% of the overall vote in the Presidential election.

He said that although he has no Fianna Fáil connections he would like to contest the next general election in Donegal as a candidate for the party.

“You have to be aligned to a party to be successful,” he told RTÉ’s Today with Miriam show.

He said that the people who had voted for him, had done so out of frustration.

“The Confidence and Supply Agreement, between Fianna Fáil and Fine Gael, has not worked to anyone’s benefit, they wanted to send a message, “to show how disconnected they are, the feeling that there is no light at the end of the tunnel.”

Mr Casey said he suspected that Mr Martin would not take his call and that he did not have his number.

Responding to a comment that Fianna Fáil was “full,” Mr Casey, said, “the party’s full, full of nonsense. If they don’t really have room, then they have a problem.

Donegal needs a strong representative he said. Fianna Fáil’s Charlie McCanalogue is a very strong candidate, he said. “I will definitely top the poll when I stand in Donegal.

“Pat the Cope Gallagher said he was passionate about standing for Donegal, then he put his hat in the ring for Ceann Comhairle. That’s a bit disingenuous.”

Mr Casey maintained that there would not be a hard border.

It was “nonsense” and there would not be a crisis, he said. “No way there’s going to be a hard Brexit.”

He said he will recoup his campaign expenses, which he estimates will be under €100,000, which he will then donate to “whatever worthwhile cause I want.”

He said Micheál Martin is “too nice to take on Leo Varadkar” and said if Fianna Fáil don’t want him as a member, he will set up a new party called New Fianna Fáil.

Mr Casey, whose campaign was marked by criticisms of Travellers and their separate ethnic status, polled strongly with 342,727 votes, or 23.25 per cent of the overall vote. President Michael D Higgins was re-elected comfortably with 822,566 votes, or 55.81 per cent.