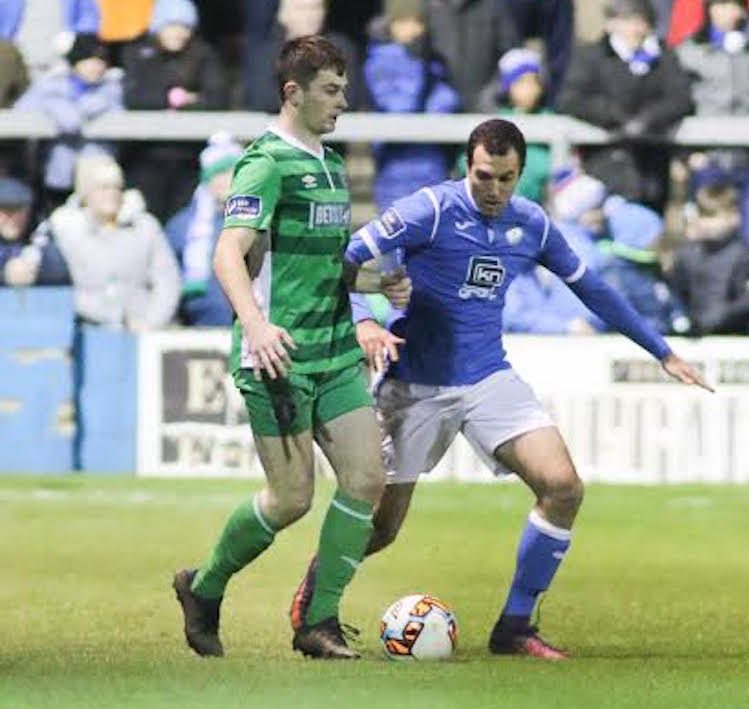 Paddy McCourt struck last night as Finn Harps drew first blood in their promotion-relegation play-off final against Limerick, but the tie remains delicately poised heading for the second instalment at the Markets Field on Friday night.

McCourt’s penalty, in the 36th minute, means Harps have a lead to protect as they head for Limerick later in the week.

Here are some talking points from last night’s game…

1 McCourt signs off at Finn Park with precious winner

It was Paddy McCourt’s last time to grace Finn Park, but what a way to leave. His goal, from the penalty spot, won’t feature among a glorious highlights reel of his goals once he retires after Friday’s game in Limerick.

In terms of importance it could grace any of his lists – particularly if Harps finish the job.

McCourt is leaving Harps – and hanging up his boots – to take up a role as Head of Academy at Derry City once the 2018 season is over.

He tucked home the penalty, after Jesse Devers was fouled by Killian Brouder for his fourth goal of the season and it was enough to give Harps the slender advantage.

After two seasons at Harps, the former Celtic ace played his final home game last night – and was given an ovation when he made way in the 77th minute.

2 Clean sheet for Burke on a night of pressure

News that Ciaran Gallagher, who had kept 14 clean sheets so far this season, would be ruled out of action due to a season-ending knee ligament injury cast the spotlight upon Peter Burke.

With only three previous games to his resumé at Finn Park, the Moville man will understandably have been nervous ahead of his surprise start.

Burke did have time to ready himself for the big game  and the former Sunderland youth could be satisfied with a clean sheet for his night’s work.

Burke got away with an early misjudgement when Conor Ellis shot against a post, but recovered and made a couple of important saves, including late in the game when he turned away Barry Maguire’s powerful shot from distance.

Burke had a good command of his penalty area and, aside from that early rush-of-blood moment, kept cool under siege as Limerick set about salvaging an equaliser.

Limerick were camped in the Harps penalty box for much of the seven minutes that were added on at the end of a nervy night by the Finn, but Harps prevailed.

Before McCourt’s goal, Limerick had the better of the chances and they enjoyed the bulk of the possession for the second half. Crucially, though, Harps had made hay where it counts – on the scoreboard.

Harps boss Ollie Horgan was well aware that his side will need to show a marked improvement for the second leg.

“They out-played us,” he said.

“I spoke about them last week. That’s the quality they have. Unless we improve dramatically, we won’t be in the Premier Division.They outplayed us. We couldn’t get out in the second half. They came at us in waves. Limerick were very much at it.”

The loan signing of Sam Todd from Derry at the start of the season wasn’t one of the big headline grabbers – but the capture of the Carndonagh man has been Ollie Horgan’s best piece of business this season.

Todd has had an outstanding campaign for Harps and has added five goals. So impressive the 20-year-old has been, there have even been links with Dundalk during the season.

Harps will do well to retain the services of Todd for next season.

Whoever the new Derry City manager is will be sure to keep tabs on the defender.

He was magnificent for Harps against Limerick and ensured that Peter Burke had plenty of protection. His composure on the ball is a massive asset to the boys in blue.

5. Stick or twist – will first leg win be enough?

Given that Harps have the lead, the onus is now on Limerick to come out and play. Tommy Barrett’s team need to score – and have to score at least twice to beat Harps, unless they take the game to penalties. If Harps score, it heightens the needs of the Shannonsiders.

But it will be interesting to see the approach taken by Harps on Friday. The likely scenario is they’ll line up with a rigid rearguard with Niall Logue perhaps coming in and Jacob Borg acting as a screen in front of the defence.

Harps are a team for whom having the second leg away from home mightn’t be as onerous a task as it would for others given how they’re set up. With a lot of walking wounded and the stakes as high as they could be, there is a lot to consider – such as the prospect of the game going (as the tie in 2015 between the two did) going beyond the 90 minutes.