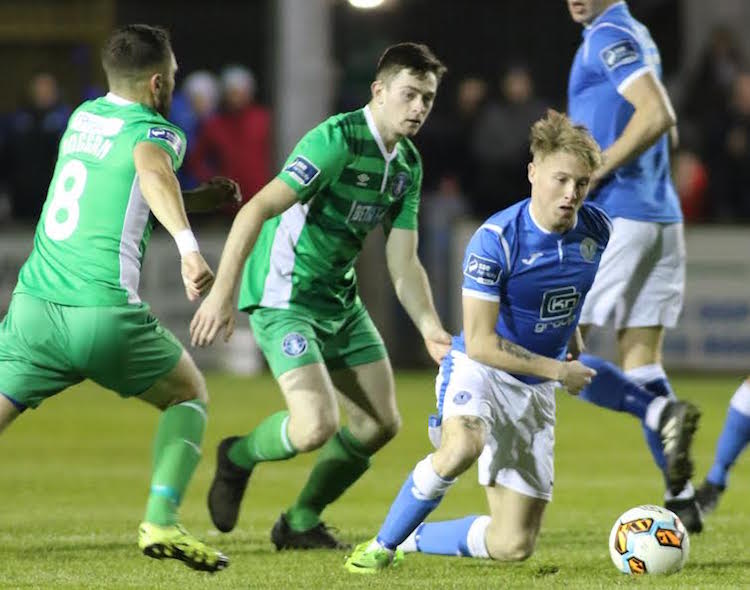 Finn Harps are facing a mini injury crisis as Ollie Horgan prepares to take his patched up side to Limerick for Friday’s second leg of the promotion-relegation play-off.

Harps head for Limerick on Thursday evening nursing a number of injuries to key players.

The Donegal side are already without goalkeeper Ciaran Gallagher through injury and Mark Coyle, owing to a suspension.

Mark Timlin sat out last night’s first leg win at Finn Park and Horgan said afterwards that the Buncrana man’s ‘season is over’.

“Ciaran is out, Mark Timlin is out for Friday and Mark Coyle is suspended,” Horgan said later.

Jesse Devers, who won the penalty from which Paddy McCourt scored the only goal of the game last night, has emerged as a big doubt.

Devers (pictured above by Joe Boland, North West News Pix) sustained a knee injury that Harps will assess ahead of their trip later in the week and the Mayo man was replaced by Niall Logue in the dying moments of the game.

Horgan said: “Jesse is in bad shape with his knee and looks like he won’t make it. He’s got ice on his knee.”

McCourt and Gareth Harkin played through the pain barrier, with McCourt lasting 77 minutes and Harkin making it to the end.

Horgan said: “Gareth and Paddy did so with difficulty.

“We got Paddy off and I don’t know what he can do on Friday. We weren’t in good shape coming into it. We couldn’t get Gareth off.”

Rookie goalkeeper Peter Burke, making only his fourth appearance of the season, kept a clean sheet last night, but Horgan has cautioned that the Moville native will face a more stern examination of his credentials at the Markets Field.

The Harps boss added: “Peter is a good lad. He’ll be tested further on Friday, without doubt. He has a game under his belt and he’ll have to perform at his highest ability if we’re going to get anything out of the game on Friday.”