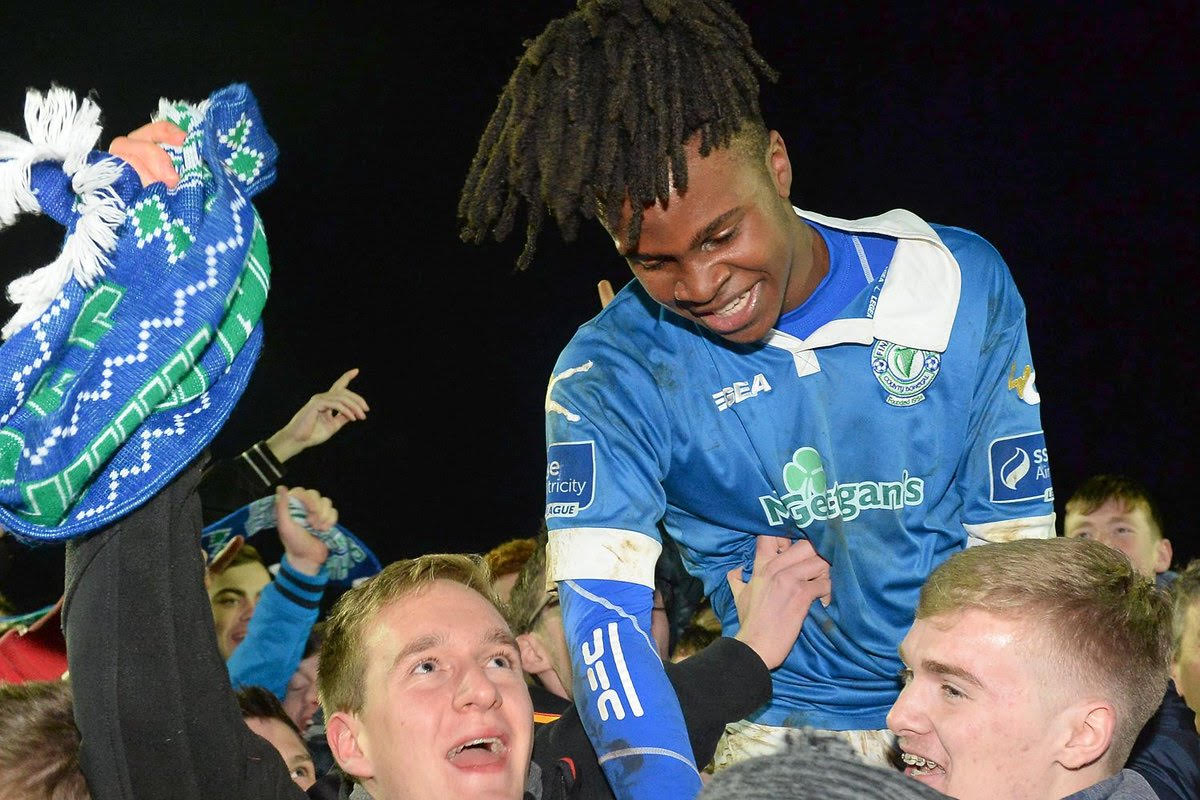 BJ Banda: “I didn’t like that…One goal changed the way people were with me”

It is three years now since Banda was thrust into the limelight for a moment that would alter history and change his young life.

Picture: BJ Banda is carried from the pitch after scoring the winning goal for Finn Harps in the 2015 play-off.

Then just 17 and a Leaving Certificate student at the Royal and Prior in Raphoe, Banda’s number went up to replace the Harps captain, Kevin McHugh.

‘Work, work, work and you’ll get a chance,’ Horgan told the teenager in the 103rd minute, a crowd of upwards on 5,000 with their nerves at their ends.

Barely 15 minutes later, Banda was off into dreamland and Finn Park shook to its foundations. A little over four months after signing from Letterkenny Rovers, having impressed at that year’s Foyle Cup, Banda flicked a header past Freddy Hall, the Limerick goalkeeper, and Harps – out of the Premier Division since 2008 – were heading back to the Promised Land.

“It was just mad,” Banda says.

‘People were getting anxious and it was very cold when I was coming on. People just wanted the game settled. Limerick were maybe more advanced that we were. To be honest I didn’t think I was going to get in at all. I just thought Kevin would be kept on for the penalties. I was shocked when he was taken off because I thought maybe it was his last game. Thankfully he stayed on for another season.

“I just had to keep going at the defence, use my pace and energy. I was just in to try and run down the defence and maybe win a free kick.”

Damien McNulty’s initial cross was headed back out to him. The necks of the crowd on a packed Town End terrace stayed back and forth. And then bedlam.

McNulty posted his second attempt right where he’d initially aimed, Banda rose to steer home what has become one of the most iconic goals in the club’s history.

“My emotions were just going mad, I was just thanking God – and I’m trying not to remember the celebration,” Banda says.

Soon, he was engulfed by team-mates, substitutes and backroom staff.

“I couldn’t believe it,” he says. “I saw a few of my friends in the corner where I ran. The atmosphere was unreal.

“The final whistle then, it was the same. People were saying it was so long since Harps were up. I couldn’t believe I’d got the goal to get them back there.”

Banda was born in South Africa, but when he was four the family moved to Letterkenny. First, his mother, Matania Ndyamba, and his sister, Tash, arrived. His father, Billy, joined them in 2004.

While in exile in Zambia in 1984, Billy Banda found basketball, playing for the Ndeke Hornets and, later, a Zambia select team.

Banda senior made history in 1995 when he was part of the first South African basketball team in the post-apartheid era. The team, an all-black selection with ‘South Africa’ across their vests, pinched themselves as they toured in the United States and played nine games, as part of a fundraising venture to build new basketball courts in Soweto.

Ten years later, Billy Junior Banda was hitting headlines in South Africa and Zambia after his Roy of the Rovers moment.

It was a goal that changed life.

“Things were different,” he says. “Even around school, people were like: ‘That’s him there’. I didn’t like that. It was funny. I couldn’t believe it was actually happening. One goal changed the way people were with me. 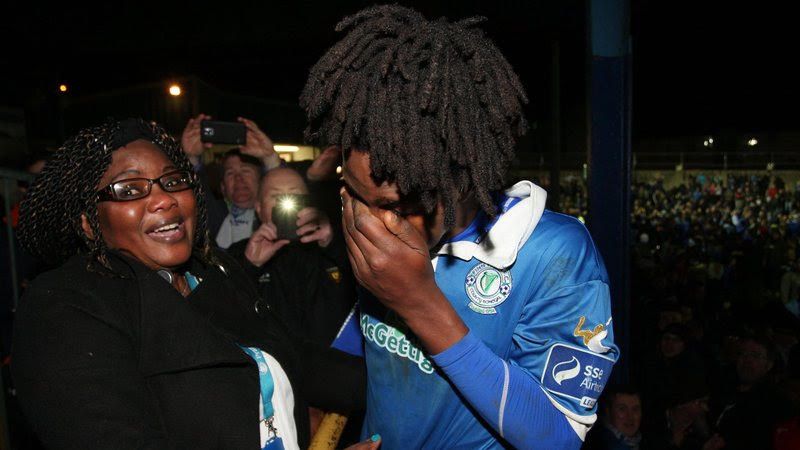 “It made things harder. The under-19 season was still on and I could feel the pressure going back down to that age group again. People were just expecting big time off me.”

Banda was being invited to switch on Christmas lights, the offers to be special guest at various functions arrived.

“It was all new to me,” Banda says. “I was just 17 at the time. I was going to functions and me still underage. There was the likes of Kevin, Keith (Cowan), Packie (Mailey) and then there’s me, this 17-year-old. I didn’t know how to act.

“It was a learning curve. It was all growing up.”

Banda and Gareth Doherty were elevated to the first team squad in the autumn of 2015. Banda, whose debut arrived as an injury time sub for McHugh in Cobh, announced his arrival with two goals in a home win over Wexford Youths. We were fighting for second. Wexford were a top class side at the time and I was just happy to play my part.

“We got into the play-offs, it was all hands on deck. I didn’t expect to be involved in the big games at all.”

Promotion would ultimately limit Banda’s chances and he made only seven League appearances in 2016.

In the 2017 season, he rose to stardom again with one of the goals, again off the bench, in a 2-0 win over Derry City at Maginn Park.

“I knew once we got promotion that Ollie would bring in heavy duty strikers and I’d not play much,” Banda says.

“It was nice to be in amongst the squad and to train with them. The goal against Derry was brilliant.”

Banda, though, would eventually become frustrated at his lack of action and in August he made his return to Letterkenny Rovers.

As Harps head for Limerick, Banda, is preparing for an Ulster Senior League joust with Derry City Reserves on Saturday.

“I’m just happy to get game time, week-in, week-out,” he says. “There’s a lot on the Rovers team that could play in the League of Ireland. The standard is very good. I know what it takes to get back up again, but I’m enjoying my football here at Letterkenny now.”