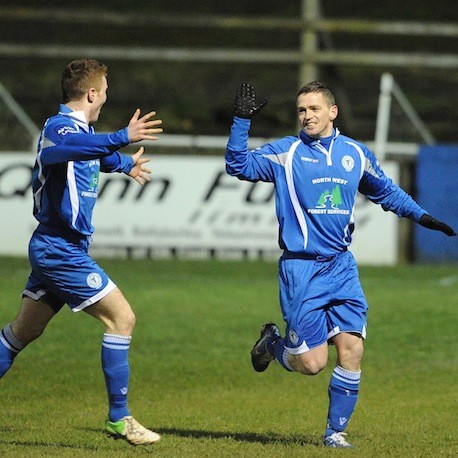 With 438 appearances and 186 goals, Kevin McHugh is better qualified than most to assess Finn Harps’ play-off chances.

The Harps legend and former club captain lined out in play-offs in the 2001/02, 2002/03 and 2003 seasons – losing them all – before coming out on top three years ago in his penultimate season as a Harps player.

The Killea man was at Finn Park on Monday night to cheer on Harps and saw Paddy McCourt’s goal give them a slender advantage.

“I do believe we can score and the boys at the back have been tremendous,” McHugh said.

“Confidence will be flying in the squad.”

However, McHugh warned:  “Home advantage in the second leg is massive. Don’t underestimate that. It’s only half-time and everything is in Limerick’s favour now.

“It’s a massive advantage. Any play-off I played in where the second leg was away it took the spark off.”

These have been exciting times at Harps, whose under-17s won the League and Cup double, while the club’s academy recently unveiled their plans for an expansion. High-ranking FAI officials, including the CEO John Delaney, visited Harps in the last couple of weeks and gave their seal of approval.

As the head of academy, McHugh is charged with overseeing the underage teams and development of the club’s conveyor belt, which has seen players move to England and gain international call-ups this year. Ensuring the wheel keeps turning is his biggest challenge.

McHugh is still actively playing and last year was instrumental as Kildrum Tigers won the Donegal League Premier Division and Brian McCormick Cup double. This weekend, he’ll make his first appearance in the Oscar Traynor Trophy as he lines out for the Donegal League against the Inishowen League.