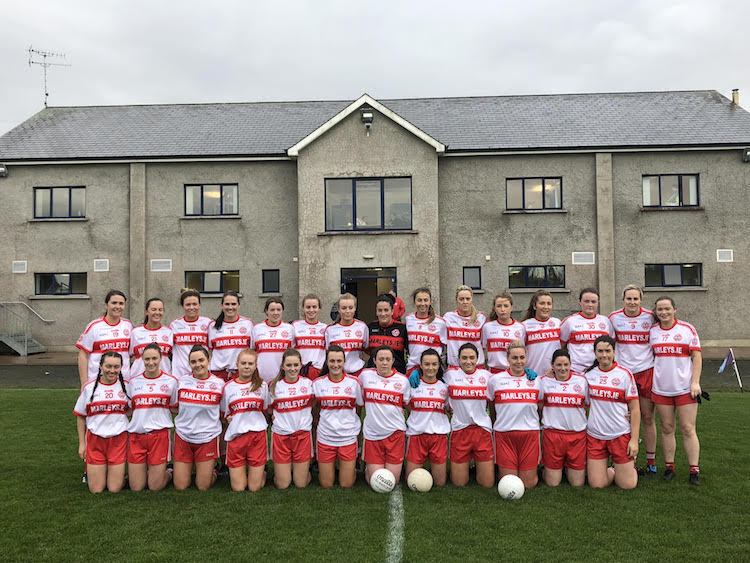 Cathriona McConnell inspired Donaghmoyne to an 11th Ulster Senior Ladies title since 2004 as the Monaghan side ended Glenfin’s hopes of landing their first.

By Chris McNulty at Killyclogher

McConnell missed the 2017 campaign, when Donaghmoyne were pipped by St Macartan’s, and in February of this year gave birth to daughter Amelia. Not long after, McConnell was back in training and was in superb form, scoring eight points, as Donaghmoyne regained a title that has felt like their own.

McConnell was the big difference on the day as Donaghmoyne had seven points to spare in the end.

With 11 minutes left on the clock, Yvonne Bonner rose on the edge of the square to fist in from Katy Herron’s ball into the mix. The goal from Australia-bound Bonner, who is joining the Greater Western Sydney Giants in the Women’s AFL for the 2019 season, briefly lifted the spirits of the An Gaeltacht Lár crew, but the deadly McConnell had already inflicted the fatal damage.

McConnell’s scored were aided neatly by a first-half goal from teenager Eimear Treanor and Donaghmoyne kicked on, scoring seven points in a deadly third quarter.

These two met in the 2011 final when Donaghmoyne recorded a comfortable win. Donaghmoyne have been undoubted queens of the Ulster club scene and, remarkably, this was a 15th successive final for the Monaghan outfit, who’d won 10 titles previously.

Donaghmoyne lost out to St Macartan’s from Tyrone in last year’s final at Emyvale, denying them a three-in-a-row.

But Francie Coleman’s girls were back with the bit between their teeth this time and a 5-15 to 1-6 win over Latton returned them to the provincial decider.

And they were in no mood to hang around here.

McConnell, playing against the wind, played her first two frees short but, having played a one-two with Amy Garland both times, McConnell was able to angle over two scores.

Glenfin levelled rapidly to draw level. Karen Guthrie’s free, after a foul on Bonner, hit their opening score, and it was Bonner, following a superb angled delivery by Guthrie, who arched over her team’s next score. The angles were narrowing as Bonner collected, but her effort sweetly sailed over the black spot.

Glenfin’s tails lifted when Katy Herron hoisted over a huge score from 40 metres, but disaster struck midway through the half. 17-year-old Treanor managed to evade a couple of Glenfin defenders. Treanor may well have been going for a point, but her shot found the top corner of Sharon Conaghan’s net.

McConnell was wide with a free that would usually be in her range, but soon added to her tally to put three points between them.

Bonner and McConnell traded points and the goal separated them at the break, when Donaghmoyne led 1-4 to 0-4.

Guthrie registered the opening two points of the second half to bring Glenfin to within a point and raise the hopes of the big Glenfin following, but Donaghmoyne hit the next seven points to take a firm command.

McConnell’s seventh of the game put Donaghmoyne six in front and was the pick of her lot, arrowing over wonderfully with a free that was kicked from almost the chalk on the right sideline.

Bonner’s goal made a game of it and they looked set to go to within two when, after super work from Bonner on the left edge of the end-line, the ball broke invitingly to Danielle McGinley, but her close-range effort crashed agonisingly off the post.

With McConnell, Cora Courtney and Rosemary Courtney all on the mark in the closing chapter, Donaghmoyne were back wearing a familiar crown.