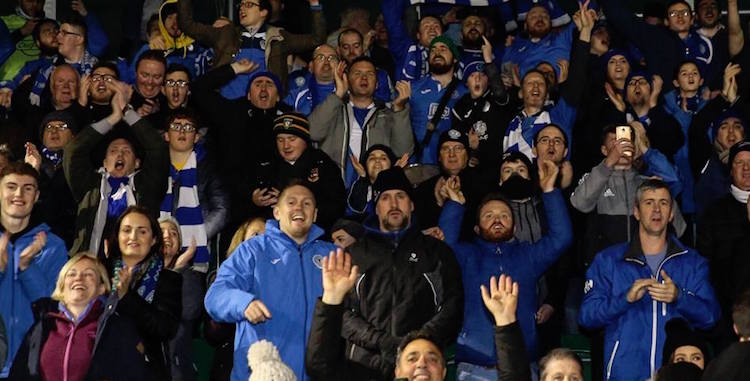 NABF middleweight champion Jason Quigley was among the huge Finn Harps support last night at the Markets Field – and can’t wait to back his team in the Premier Division.

Quigley, who regularly sports the Harps colours during sparring and training, made the pilgrimage to Shannonside along with hundreds of others.

And the Ballybofey man helped roar Harps to a famous 2-0 win.

Mark Timlin’s goal at the end of the first half gave Harps the lead and, right in front of the Harps hoards, Nathan Boyle put the game and the tie beyond Limerick’s reach when he cracked home a second.

“What a team what support , that was my first ever away game for @FinnHarpsFC am I a lucky gem,” Quigley said on Twitter.

“Some buzz next year in the @SSEAirtricityLg premier”

What a team what support , that was my first ever away game for @FinnHarpsFC am I a lucky gem 🤣🤣great to see everybody out supporting them and well deserved result , some buzz next year in the @SSEAirtricityLg premier , #UTH 🔵⚪️ https://t.co/ztTqqZFoxK