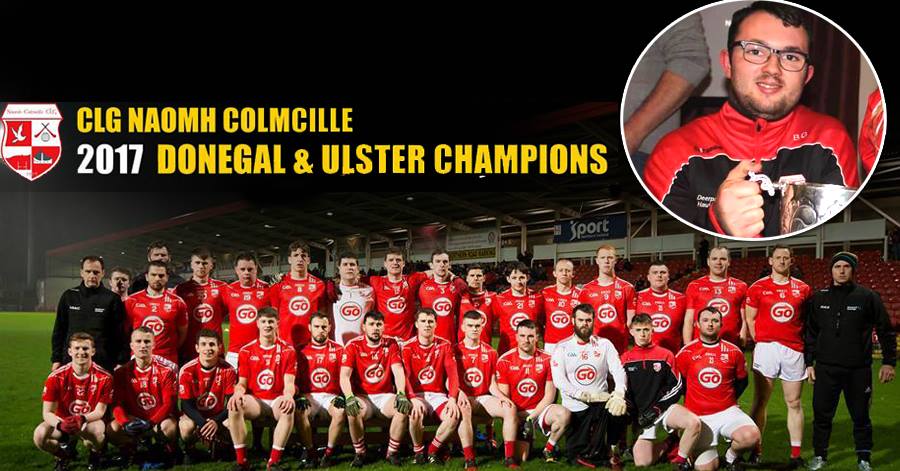 Newtowncunningham and the surrounding areas is in mourning after the sudden death of young footballer Barry Gallagher at the weekend.

The popular 23-year-old was a member of the Naomh Colmcille squad that won the Donegal Junior and Ulster Junior Championship titles last year.

Along with his brother Stephen, Barry was an integral part of the Naomh Colmcille club.

“All in the club are devastated this morning as we come to terms with awful news of the death of senior player Barry Gallagher,” the Naomh Colmcille club said in a short statement on the club’s Facebook page.

“Barry has been a player at the club from u6 right up to senior and along with brother Stephen was an integral member of last year’s Ulster Junior winning squad.

“In a way words are meaningless at a time like this but our thoughts and prayers are with Shaun, Mary, Danielle, Julie, Stephen and the extended family at this most difficult time.

“We also keep in mind our senior squad, management and players who will greatly feel this loss. Rest easy Barry!”

The clubhouse at Pairc Colmcille was opened yesterday afternoon as the local community attempted to come to terms with the news. The Donegal GAA Health and Wellbeing Officer Kevin Mills was in attendance.

Barry, from Monad, Newtowncunningham, is survived by his parents Shaun and Mary, sisters Danielle and Julie and brother Stephen.

His funeral is on Thursday at 12noon at All Saints Church, Newtowncunningham. Interment afterwards in the adjoining cemetery.