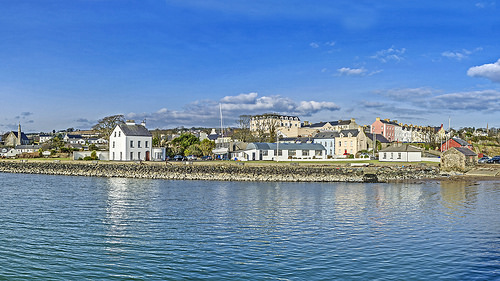 A community group in Inishowen has welcomed the news that Caiseal Mara Hotel in Moville is to become a Direct Provision centre, accommodating around 100 people seeking International Protection in Ireland.

Inishowen Together say they we wish to extend the warmest of Inishowen welcomes to all those who are arriving – and to let them know that they will have many new friends here.

The group say they understand that people seeking asylum have faced untold difficulty in the countries that they have fled – the horrors of war and the terror of political and religious persecution – and we would like to offer solidarity and whatever support we can usefully provide.

The people arriving in Moville are in a vulnerable position and place in their lives – but immense strength and resilience have brought them here.

Inishowen Together spokesperson, Siobhan Shiels says: “Inishowen is certain to benefit massively from this injection of many new talents, perspectives and experiences.”

The group says it is good news that we get to meet 100 new people.

However, a statement from the group added “The bad news is the fact that they join us via the discredited system of Direct Provision – a system run for private profit that segregates asylum seekers from the community in hostel accommodation where they cannot cook for themselves or enjoy a private family life.

“Across the country, we have seen reports of the damage done to Direct Provision residents’ mental health from years stuck in a system that infantilises them; that tells them what and when to eat; that makes them live in small rooms with strangers; that forces them to work out how to survive in isolated locations on €21.60 per week; that pushes them out of work and education to see their skills and qualifications stagnate.

“The right for asylum seekers to work was introduced only recently after the Supreme Court ruled that the ban on work was unconstitutional – but it’s a right that has been made very hard to realise, with barriers including a nine-month waiting period; plus rules that exclude asylum seekers from holding a drivers licence or opening a bank account.

“Direct Provision – characterised by the Movement of Asylum Seekers in Ireland as an open prison – is a disgrace that this country will have to apologise for in the same way the State has had to face up to the cruelty of the Magdalene Laundries. We do not want the legacy of Direct Provision to be a stain on lovely Moville.

“Across the country, people are holding the Direct Provision system to account and demanding an end to it – for example with university campus boycotts of Aramark, one of the companies profiting the most from the multi-million Direct Provision industry. We in Inishowen Together stand with the country-wide campaign to End Direct Provision – and we will offer support to new Moville residents embattled by the system.

“We will also be pushing for the immediate and genuine right and opportunity to work for residents: Inishowen without a car is a challenge; and the border rules out any opportunity that the nearest city of Derry might have had to offer since asylum seekers aren’t free to cross it.

“While we hope and expect that the owners of Caiseal Mara Hotel will do their best on behalf of residents, we would invite them to inform themselves about the system they are about to become part of, and to that end would recommend the book Asylum Archive by Vukasin Nedeljkovic as a good starting point. We intend to petition Donegal County Library to include a copy of this book in every branch, since it tells a story of national importance that too few people have heard about.”

Inishowen Together is a group that evolved out of the local Together For Yes campaign during the referendum to repeal the Eighth Amendment. It came about because the people involved in Together For Yes were inspired to keep working together to campaign for positive change in their community across a range of feminist, social justice and ecological issues that they believe to be of critical importance to our future. To get involved, contact inishowentogether@gmail.com.

One project that Inishowen Together has taken on is that of Inishowen Welcomes – originally set up by local activist Siobhan Shiels to promote the inclusion of the Syrian families who arrived in Cardonagh last year. Inishowen Welcomes has staged events such as Hafla Coisir (an intercultural celebration in Carndonagh to mark the end of Eid). It has facilitated the introduction of Syrian cookery classes and has provided music lessons to new Carndonagh children; and its volunteers also take part in Donegal Local Development CLG resettlement support initiatives.