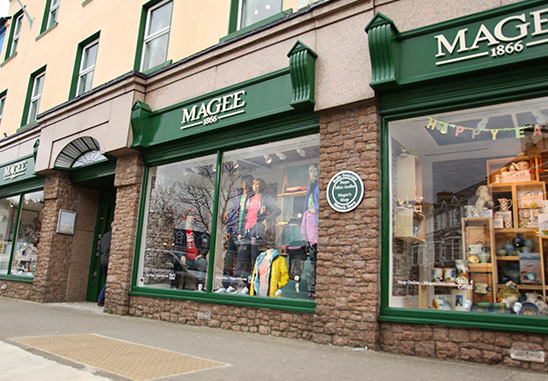 The accumulated profits at the firm behind one of the country’s best-known clothing brands – Co Donegal’s own Magee – last year climbed to €6.7m.

The firm, which operates principally across the UK and Ireland, today employs 130.

Magee clothing chairman Lynn Temple said “Magee continues to grow sales with selected wholesale customers, its own online sales, a new shop in South Anne Street [in Dublin] plus the existing Arnotts concession and the original shop in Donegal since 1866.”

On the performance of the business in 2018, Mr Temple said that the company has seen further development of sales.

“But consumer confidence in the UK and Ireland continues to be adversely affected by the accelerating changes in high-street retailing and the never-ending uncertainty surrounding the implications of Brexit,” he added.

Mr Temple said the company’s 2017 performance had also been affected by the weakening in sterling caused by the Brexit referendum result and the market nervousness that followed.

Involved in the business since 1974, Mr Temple states that Magee aims for future growth through selected high-quality retailers throughout Britain and Ireland plus its own online sales and retailing.

Magee was established in 1866 by John Magee as a small drapers shop in Donegal buying and selling handwoven tweeds. In 1900 Robert Temple bought the business and today the fourth and fifth ge

DD Motoring: Spaces and entitlement through the years