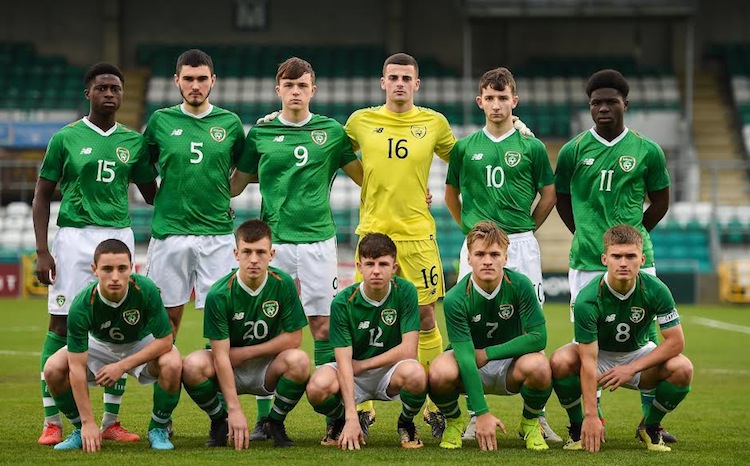 No joy for Ronan McKinley and Irish U17s in Tallaght

Ronan McKinley started and was heavily involved today, but the Republic of Ireland Under-17s were beaten 4-1 by Germany at Tallaght Stadium in the final match of the UEFA Under-17 International Tournament.

The Newtowncunningham schoolboy (pictured above; front row, second from left), who lines out for Derry City, played 72 minutes, while Seamas Keogh – a Sligo teenager who is at school in Ballyshannon – also played.

Jetmir Amiti’s through-ball found the run of Tim Lemperle who side-footed to the corner of the net for a composed finish to give the visitors the lead in the fourth minute.

Matt Everitt showed good feet when slaloming in from the right flank to carve open the Germany defence.

The ball ran for McKinley who just couldn’t find the finish as he blazed over the top from close range.

Though the game remained tight into the second half, Ireland goalkeeper Jimmy Corcoran was forced into smart saves to deprive Lars Kehl and then Marvin Weiss.

Having survived, Ireland were inches from an equaliser on 61 minutes. McKinley cut in on the left to get his shot away but Noah Atubolu in the visitors’ goal got the faintest of touches to tip the shot onto a post.

Two minutes later, the Germans doubled their lead when Weiss turned cleverly inside the area to drill his low shot past Corcoran.

It was then all but game over in the 67th minute as Germany stretched their advantage.

Festy Ebosele was adjudged to have tripped Lemperle inside the area with substitute Kerim Calhanoglu scoring emphatically from the resulting penalty.

Ireland got some reward for their endeavour three minutes later. Ebosele did well on the left to cross for Everitt to score with a diving header.

Marton Dardai added Germany’s fourth goal two minutes from time, as he headed home at the near post from Calhanoglu’s free kick.