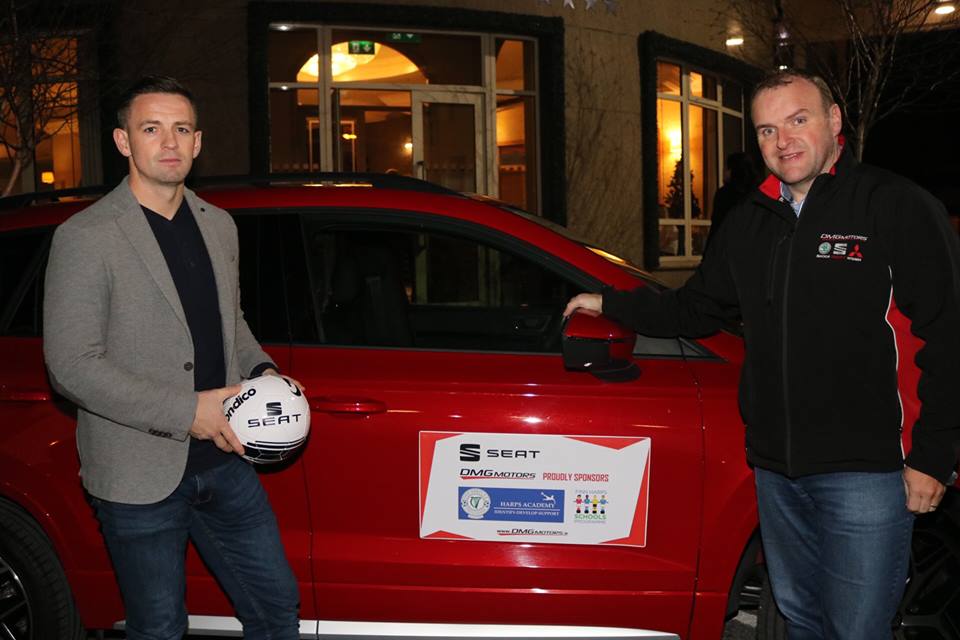 DMG Motors and SEAT have been announced as the new sponsors for Finn Harps Academy & Finn Harps Schools Programme.

The sponsorship was confirmed at the Finn Harps end of season awards night on Saturday last, where the new SEAT Ateca was on display for the occasion.

“To say we are delighted to be on board would be an understatement,” said a spokesperson for DMG Motors.

“We are absolutely delighted that a forward thinking local business like DMG motors has backed our project,” said Kevin Mc Hugh, Head of the Finn Harps Academy and Technical advisor to the Finn Harps Schools program.

McHugh added: “There are so many positives within our club at the moment and especially our Academy and Schools project which is unique in so many fronts nationally.

“We have boys and girls, coaches, volunteers and staff from Malin-Head to Kilcar involved in our Academy and schools projects so it really is a county wide project.

“Massive thanks to Stephen and the staff at DMG motors from everyone within Finn Harps FC and I couldn’t recommend them more, good genuine people to deal with.”

The proud event comes ahead of the SEAT Six Day Sales Event at DMG Motors, which kicks off today (Monday)

There’s never been a better time to order a new SEAT than this week.

During the SEAT Six Day Sales Event from November 19th – 24th, your 191 Ateca is exclusively available with Scrappage of up to €3,000, Finance from 1.9%, Free SE Product Pack and Free 3 Year Service Plan.

The award-winning Arona, Irish Small Crossover of the Year 2019, the stylish Ibiza, the sporty Leon, award-winning Ateca SUV, are all available today with incredible offers.

Book your test drive this week to avail of the exclusive sale for 191 cars.