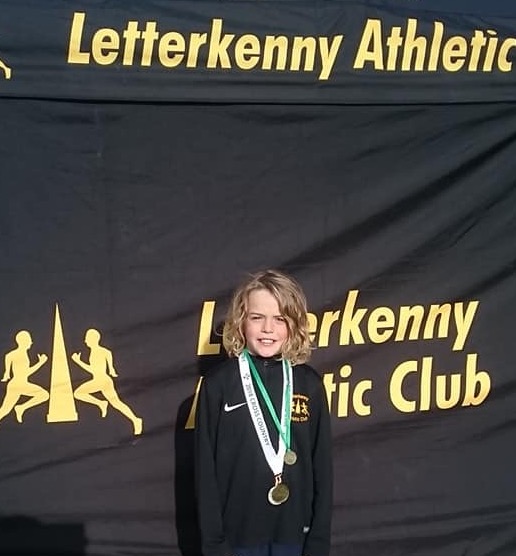 It was another busy weekend for our Black and Amber Crew competing in the Northern Ireland Ulster Championship UnEvens age in Scotstown.

Taking into consideration many of our Juveniles were running out of age, this didn’t stop LAC continuing on their recent success of bringing home Medals. We Had U11 Harry  Shields who was once again crowned Ulster Champion 2018 and u11 Emma Bonar winning Individual Silver.

U11 Girls and U13 Boys won Team Gold and Team Silver for the U11 Boys and 35 athletes have qualified for National s in December.

On Behalf of the Juveniles, We would like to Congratulate our Senior Athletes Eoin Hughes and Niamh Kelly who were both crowned Ulster Champions in Novice Race. Both great races for our juveniles to watch and support.

The first race of the Day was our U11 Girls. We had five runners, all performing exceptionally well. Emma Bonar took the lead from the sound of the gun, and kept the speed steady all the way, aiming to retain her Ulster title but coming close to the finish line was overtaken giving her second place with a well deserved individual Silver Medal.

Emma was first Counter for her Team and part of the winning Donegal Team who won Gold.

Three Individuals Medals for Emma. Next Home was Sophie Ellis, who is having a supercross country season running consistently finishing 13th and a counter for both Lac Team and Donegal Team who took Gold.

Ita McGee ran well to finish 18th  along with newcomer Katie Elliott  (28th)and Jade Gallagher who are both improving after every race and this result earned the Girls a Team Gold.

Our U11 Boys were next, with a mixture of u10’s and U11’s boys under the guidance of Coach Dennis Shields, Boyd Robinson and Tommy Naughton. This groups of boys are Dynamo together and proved it well on the Day. Another Outstanding Performance from Harry  Shields who was looking very relaxed and strode his way around the course to take the lead and the Deserving Glory once again to be crowned U11 Ulster  Champion.

Harry also led his team home to Silver and was also a Counter for Donegal Team who won Gold. Bradley Boyle running out of his age ran superbly to finish in 12th place, and staying close together working as a team were Daragh Naughton, also out of age, Jack Robinson, Danny McKinley, Callum McGilloway and Charlie Heraghty all with strong finishes to claim Silver for the Team.

Our five U13 Lac Girls Olivia Plumb, LucyToner, Ellie Martin, Alisha Gallaher and Bebhinn Coyle all held their own in the race with each of the girls improving greatly and ran with great consistent dedication finishing in the middle of the pack.

The U13 Boys were well represented in a strong competitive race. Philip McGee led his team out in the field with all 11 boys excelling themselves as a group and running with determination and team spirit with Philip finishing in a fine 4th place, the first home for the team, following with another great race was Eoghan Farren, both boys been counters for Donegal Team who won Gold.

Next home was Mark Galvin who finished 18th, Alex Plumb 28th, Charlie Robinson 34th, Noah Du Plessis 42nd and Cianan Coyle all doing themselves proud earning an Ulster Gold for the Team. Well Done to all our other u11 runners on the day.

Next was u15 Girls, and Lac Girls got off to good starts but the pace soon picked up, with chloe shiels holding her own for the most part of the race, striding along and coming into the finish line to 20th position.

Next home for Lac was Gillian Reynolds who ran a good gutsy race to finish 25th, Katie McGee was next home pushing it out to finish line to 26th along with teammates Aimee Bonar, Ella Black and Kaitlyn Coyle who all ran well.

Our u15 Boys race was of a high standard with large numbers lined out in the pens. The Black and Amber boys all ran strong, putting in a good effort with  Evan Keown coming home in 18th, Ronan Kelly, Christopher Murray and Ryan Canning. The Team finished 4th overall.

Mollie Page ran in u17 Girls combined with u19 Girls race. This was a tough race with talented athletes, Mollie put in a good performance and finished in 21st position.

Last race of Day for juveniles was u17 Boys with Jack Holian getting off to a good strong start out front but throughout the course, the speed level increased with Jack coming into the finish line in 19th place. Next home was Oisin Farren with a good gutsy performance and Ronan Kelly, Ryan Canning and Christopher Murray all finishing well up the field.

Thanks to our Coaches, Parents and Marley Bus. Next stop is Nationals in two weeks.