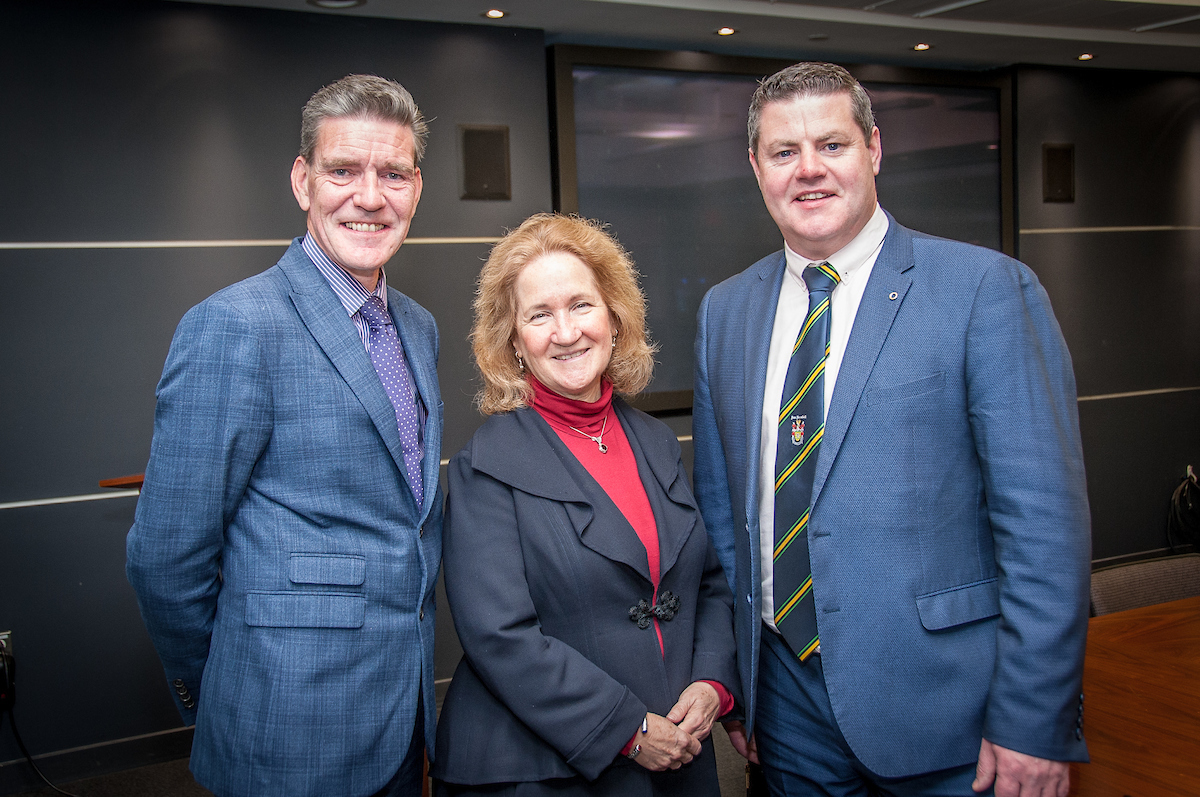 Potential US investors hear about unique benefits of the Northwest

‘Ireland North West is exceptionally well placed as an investment hub for business and global companies seeking to establish a gateway to both the UK and EU markets’ – that was the key message shared with potential investors in both Philadelphia and Boston last week.

Focused engagements with industry specialists, FDI executives and venture capitalists took place over the week in both cities presenting a compelling investment proposition that the northwest city region has to offer.

The trip is part of the Trade and Investment mission led jointly by Donegal County Council and Derry City and Strabane District Council.

Potential investors heard from leading global company DuPont which has a longstanding commitment to the region. The company DuPont takes advantage of the unique combination of benefits that the Northwest region has to offer including an accessible, connected and business friendly gateway region with a compelling vision for greater international impact. 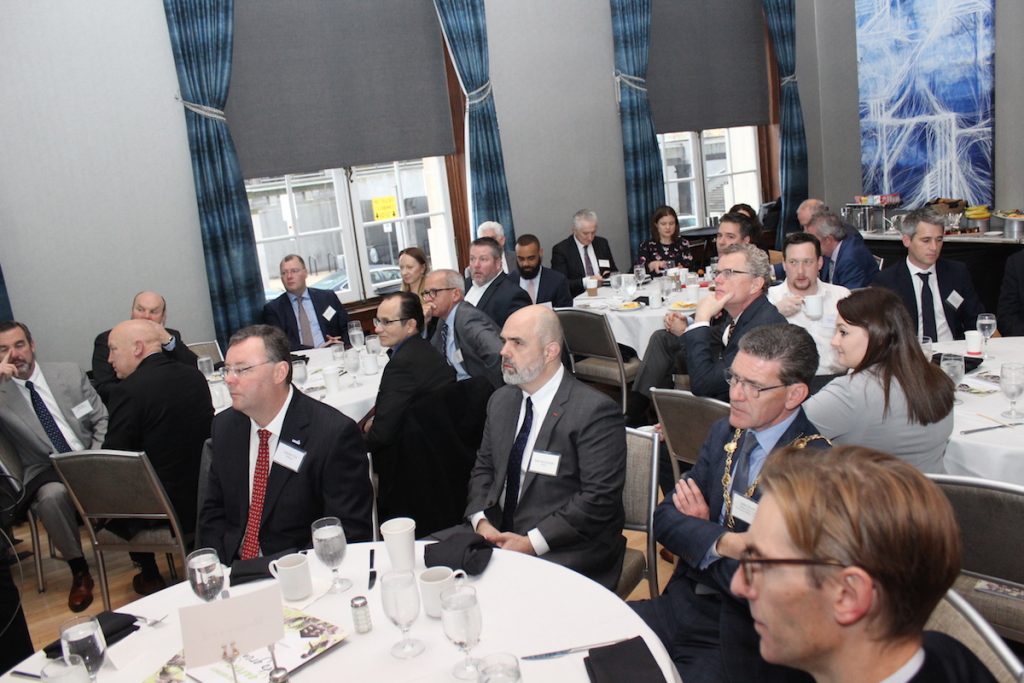 Meeting of industry specialists with the Ireland North West delegation in Philadelphia last week during the delegations visit to the US.

Investors learned that companies and businesses are attracted by a talented and educated workforce, the value balance, the superb quality of life and the supportive business environment.

Cllr O’Domhnaill said he believes that these types of engagements are essential if we are to raise the profile of the region as an investment location.

“Having these key influencers and potential investors in a room focusing on the northwest region and sharing with them our vision and ambition as well as the practical supports and assistance available to businesses in the region is vital. There is no better way to build meaningful connections and relationships than face to face engagements,” Cllr O’Domhnaill said. 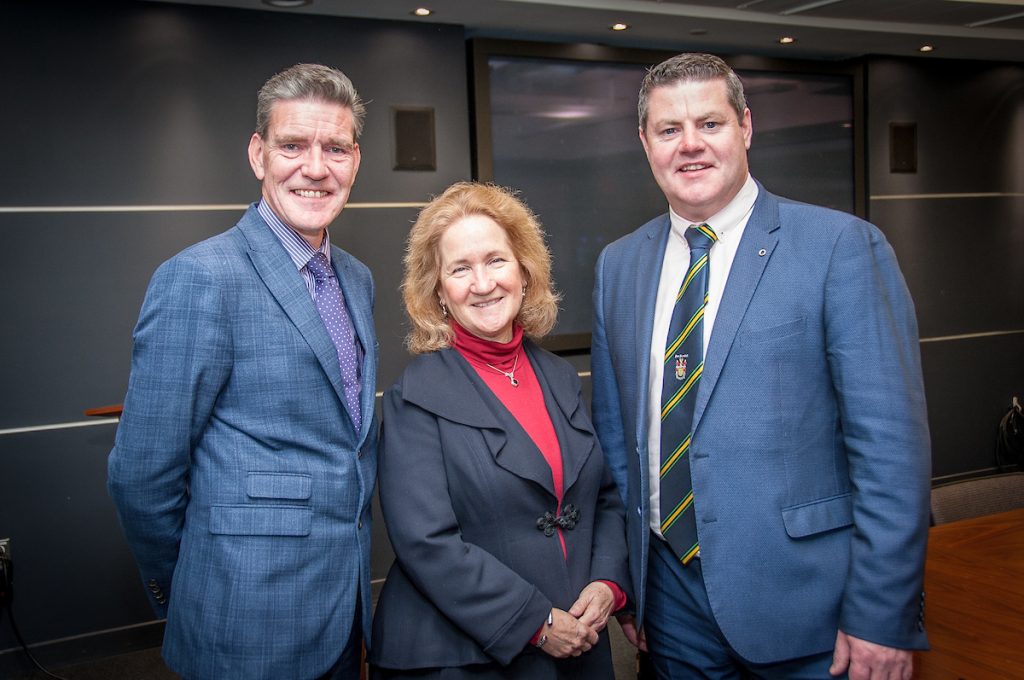 Mayor John Boyle said he believes that “the strength of the region is underpinned by the strong collaborative approach which sees industry, government at both central and local level and further and higher education institutions from both sides of the border working together to fuel further economic growth and prosperity. This is something that investors value greatly in terms of facilitating ease of access to supports in the region”.

Local businesses from a range of sectors from across both Council areas also participated in the mission, meeting with potential clients and business partners with a view to increasing sales and expanding their businesses.

Derry based Bridie Mullin Irish Linen Ltd. participated in the mission and brought her eponymous label of handcrafted quality Irish line to Boston in an effort to tap into the US market.

Bridie explains that the trade visit was an opportunity to build on her own research and to visit stores and meet with potential clients getting a deeper understanding of what exactly the customer is looking for. It also allowed her to get an insight into the potential costs associated with exporting and logistics assisting in finalising price points for trading.

An important part of the trade and investment mission involved engagement with educational institutions with a memorandum of understanding being signed by the North West Regional College and Philadelphia Community College and the State of Pennsylvania that sees the consolidation of relationships developed over the last two years.

Samantha Traynor, Vice Principal of the North West Regional College who also participated in the Trade and Investment Mission explained “the MoU represents the first step in building and consolidating a partnership through education and training with a specific focus on sharing best practice in Work Based Learning to include Traineeships, Apprenticeships including Higher Level Apprenticeships and also the continued professional development of our respective professionals in our workforce.” 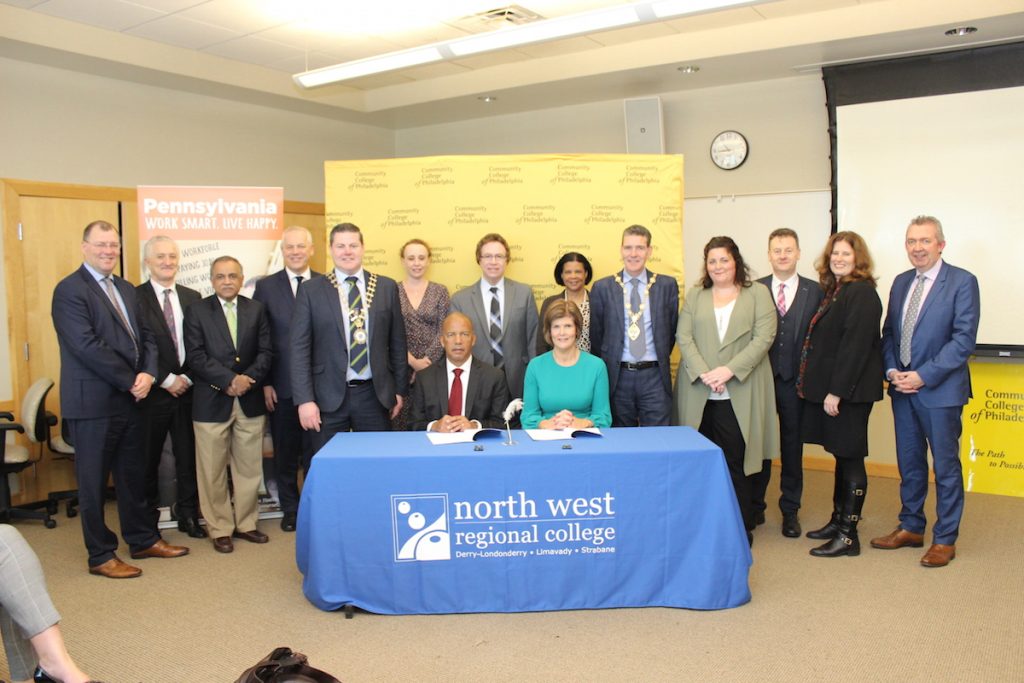 The week saw the announcement by both Councils of an exciting research project with Harvard Graduate School of Design exploring how the cross-border northwest city region can be shaped in light of the economic, political and social realities of Brexit and this project is being led by Assistant Professor Gareth Doherty in Harvard GSD who is originally from Donegal.

Reaching out to the diaspora was a key objective of the mission and this manifested in events in both Philadelphia and Boston. Members of the diaspora from across the region attended and shared with the delegation the opportunities and challenges faced by the diaspora and their commitment to continue to engage in a way that is meaningful and mutually beneficial.

The Cathaoirleach of Donegal County Council also had the honour of accepting on behalf of Donegal Hospice a cheque of $14,000 raised by the Donegal community in Philadelphia. 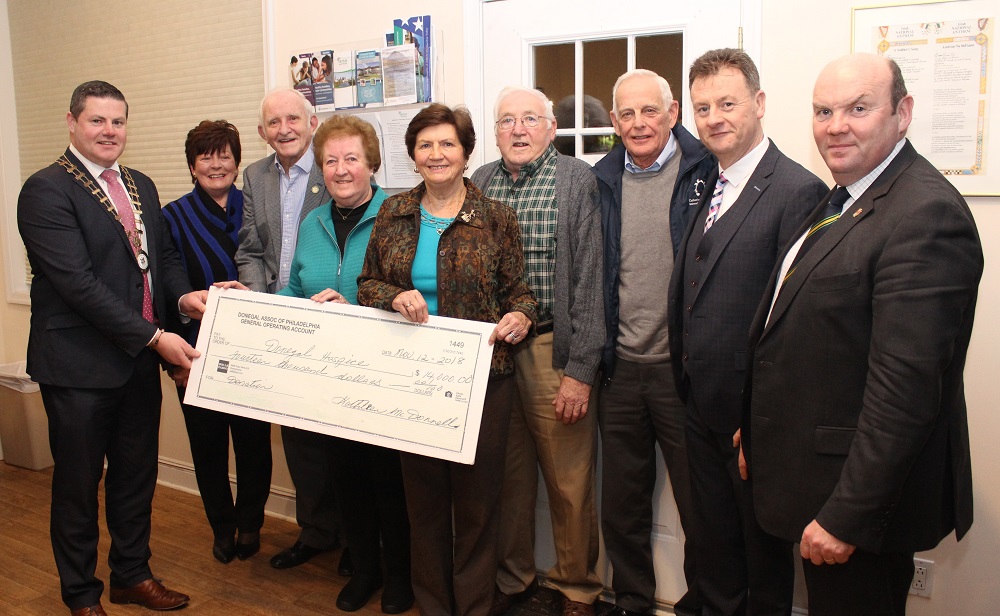 Donegal Association of Philadelphia present cheque of $14,000 to Donegal Hospice

Seamus Neely, Chief Executive of Donegal County Council, said: “this Trade and Investment Mission is part of the ongoing positive work being done by both Councils.

“We are committed to continuing with the positive work we are doing to drive forward our economy and to maximise the opportunities we have as a cross border gateway to both the UK and EU markets.

“We have longstanding connections with Philadelphia and Massachusetts and these connections transcend economic, cultural and political linkages. The Golden Bridges conference has provided the Northwest region with an important platform in the Massachusetts region allowing us to reach out, connect with and form meaningful relationships and collaborations with stakeholders in various sectors that have been instrumental in progressing growth and prosperity in the region,” Mr Neely said.

John Kelpie Chief Executive of Derry City and Strabane District Council explains that “it takes time to make connections, develop relationships and build trust. Our ongoing positive engagement with Massachusetts has to date resulted in a number of exciting developments including the investment and success stories around One Source Virtual and Metaverse.

“Results such as these are part of our key objectives and are evidence that our direct approach of travelling to the US, making those connections and building rapport, really works.”

Potential US investors hear about unique benefits of the Northwest was last modified: November 19th, 2018 by Rachel McLaughlin
Facebook0Tweet0LinkedIn0Print0