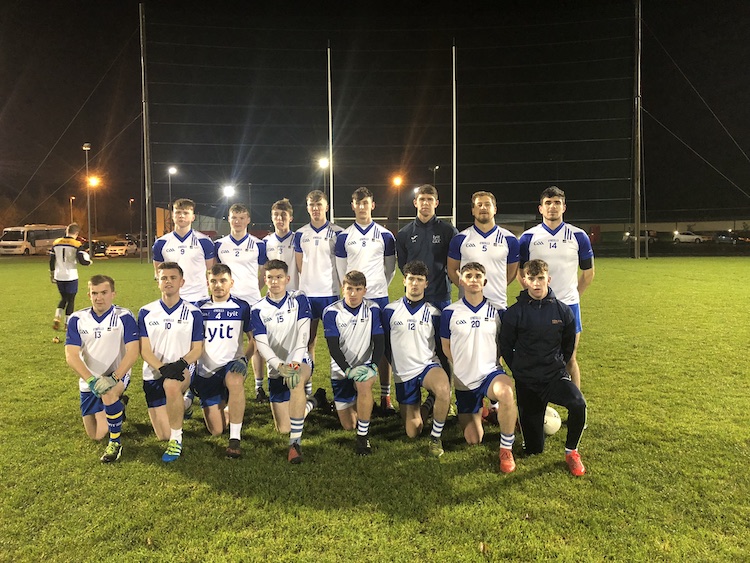 The Buncrana man scored 2-2, including the 59thminute goal that finally swung the pendulum in favour of Michael Murphy’s team.

Peadar Mogan did the spadework on the right channel and his off-loaded presented the chance for Campbell.

The full-forward has been in deadly form of late for the Port Road scholars. Although his goal was the game’s big score, coming as it did in the dying moments, just seconds later he was down the other end to make a heroic block that denied DkIT Cathal Finnegan.

Keelan McGroddy arched over his fifth point of the night soon after, completing an excellent game for the Downings man.

With LyIT under the watch of Murphy and DkIT managed by former Armagh star Oisin McConville, it was a game that saw two great Ulster forwards pit their wits.

An early goal from Paudie McMahon threatened to derail LyIT, but their response was superb – hitting back with 1-5.

In that spell, McGroddy and Enda McCormick landed wonder points and the goal arrived from Michael Langan in the 10thminute, after being fed by Caoimhinn Marley.

Five minutes before the break, a brilliant LyIT move that involved Langan, Ultan Doherty and Daragh Black concluded with Campbell firing to the net.

Sam Mulroy hit a brace of points to bring DkIt to within three at half-time and the Dundalk side were level as Finnegan, Ross Nally and Finnegan again struck.

But LyIT shook the heads clear and scored the game’s next five points with McGroddy (2), Langan, Marley and Campbell registering.

Disaster struck midway through the second half when Finnegan latched onto a pass from Mulroy to shoot past Danny Rodgers.

Campbell had the ball in the net when he swept home a Daragh Black centre, but his effort was chalked off for a square ball infringement.

A brawl behind the LyIT goal had stunted the game’s momentum briefly and when order was restored it was Dundalk who gained a foothold.

A Finnegan free levelled things up for DkIT, who were in front when sub Shay Hoey popped up for a point.

McConville was livid when Langan – already on a yellow card – escaped sanction for a foul right in front of the Dundalk contingent during that period when the pot was simmering.