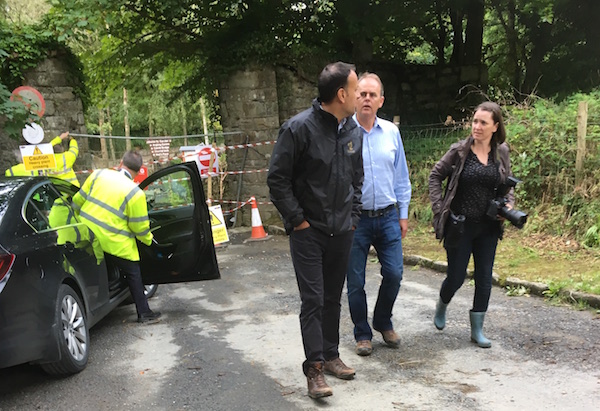 €3.2M for Donegal tourism and enterprise projects including Swan Park

Donegal Minister Joe McHugh has announced Government funding of more than €3.2million in two key tourism and enterprise projects in the county.

“This huge funding package will reopen Swan Park in Buncrana thanks to €1.7million from a special Government fund and another €1.5million from the same pot will fund an extension of the Áislann Ghaoth Dobhair digital hub, opening up more valuable office space,” Minister McHugh said.

“This a phenomenal pay day for the county.

“Take Swan Park first. The €1.7million will bring that park back to life – for tourists, families, dog walkers, nature lovers and people who keep fit.

“It was a prized asset in the town and it bore the full brunt of the Inishowen floods. It is only because of the direct action that I took across Government that funding has been secured to not only restore it but to take it to another level.

“Before the summer, as Government Chief Whip, I brought senior County Council officials to Dublin to meet Government departments, Fáilte Ireland and others and from there I could see what work was needed and more importantly how it could be funded.

“Swan Park will now take its place among the many achievements in the Government’s unparalleled response to the Inishowen floods of 2017.

“There was €10million to repair roads; 300 stretches of roads and bridges were reopened; millions for the County Council for flood relief; hundreds of farmers given grants to repair land and fences; emergency clean-up funding; close to €1million for sports clubs and new Irish Red Cross ambulances.

“In the midst of all that we halved the two year timeframe that it was estimated to get the infrastructure in the region back to normal.”

“Look at what we’ve achieved. The Rural Regeneration Fund was always going to be targeted for Swan Park and that focus has paid off in spades.”

The Department of Rural and Community Development which administers the fund is to confirm later today that Swan Park will get €1.7million and Áislann Ghaoth Dobhair €1.5million.

Minister McHugh said: “These funds are a phenomenal success for the county. There’s no two ways about it.

“Áislann Ghaoth Dobhair is a success in its own right and for the whole of north and west Donegal.

“Údarás na Gaeltachta have brought a whole new dimension with this project. Its home to big name employers in our county like Optum and Pramerica, allowing staff a better work-life balance.

“It’s also driving networking and innovation with all the hot desk solutions, video conferencing and other comms that it provides. All this allows business people, start-ups and entrepreneurs to feed off each other and grow.”

Minister McHugh said: “Let’s also not forget that this €3.2million for Donegal is only the first tranche of funding under the Rural Regeneration and Development Fund. More work is underway on other applications and I’m told there will be another announcement in the New Year.”

“A huge thanks has to go to Minister for Community and Rural Development Michael Ring for driving this Rural Regeneration plan. It is a massive fund but ultimately what’s best about it is the impact that it will have on the ground.”

Fine Gael County Councillor Mickey Doherty said: “We have put serious effort into flood response in Inishowen and campaigned hard for Swan Park to be on that list. I am delighted to see it pass that test and get such huge funding.”

Party member Michelle McKenna added: “The people of Buncrana will be hugely thankful for this massive funding and I hope the whole town and every visitor makes the most of the restored park when it opens.”