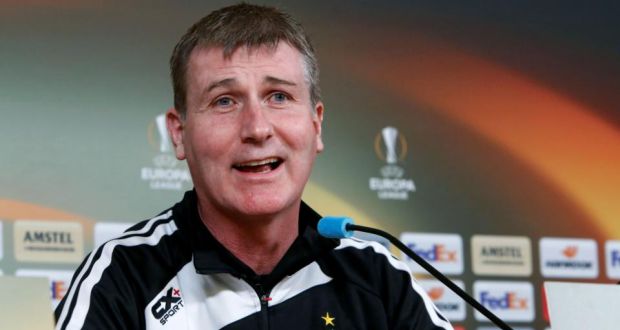 Stephen Kenny heads to Dublin for Republic of Ireland talks

Stephen Kenny will meet with the FAI Board on Friday for the vacant managerial position with the Republic of Ireland.

The Dundalk manager’s exemplary record in Irish football has led to St Patrick’s Athletic calling for his appointment citing his “experience, knowledge, commitment and intellect.”

In a statement, the League of Ireland club said: “The board of St Patrick’s Athletic FC, as stakeholders in Irish domestic football, have convened and endorse and recommend Stephen Kenny for the vacant position as manager of the national team.

We believe Stephen Kenny is the best candidate and that he has proven he has the experience, knowledge, commitment and intellect to change the current direction of the Irish senior team.

Stephen’s appointment would undeniably be a boost for both the grassroots and domestic leagues.

“All involved would know that the country’s game would be in the hands of a man who knows and believes that the future of the game is in the nurturing and proper and professional development of the game in schools, communities, academies and clubs countrywide.

“We hope that all stakeholders of the domestic game that agree, express their view in the public forum.”

Kenny himself has already outlined why he ready to take on the role. The Dundalk boss refuted the idea that his lack of experience in England would inhibit his ability to do the role.

Speaking to the Irish Times, he said: ” I actually find the question quite insulting. You have to earn respect. You earn it on the training ground every day with your level of preparation and attention to detail; no matter who you are you have to earn it every day. I’ve been with the Dundalk team for six seasons but every day I feel I have to go in and earn the respect of those players again. The minute you drop your standards, you receive nothing. Nothing.

But I know a lot of the [international] players. I gave Stephen Ward his debut at Bohemians; gave James McClean his debut at Derry, then sold him. Obviously, there are some former Dundalk former players involved and a lot of the others . . . Sean Maguire, Enda Stevens, David Meyler. a high percentage of the players have been in the league. Shane Duffy was around the scene at Derry, even though he went away at a young age so I don’t consider that an issue.”