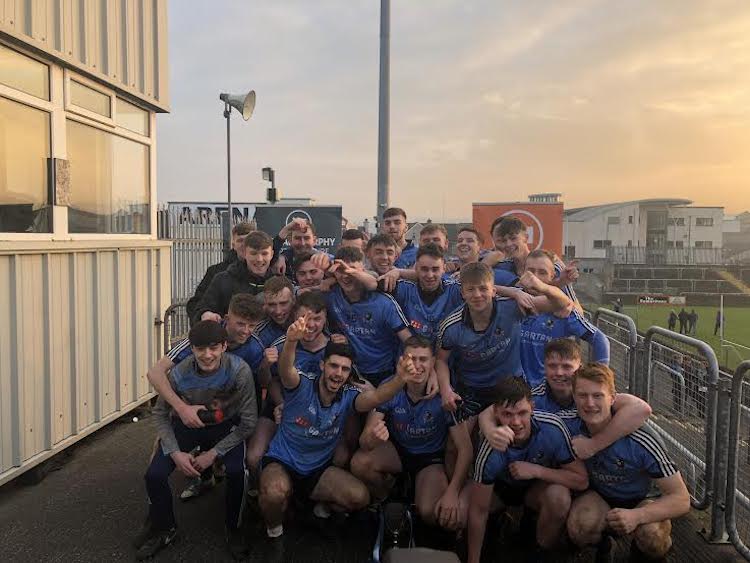 Milford won their fifth Donegal U21 B Championship thanks to a hard-earned replay win over St Naul’s.

That there was just a solitary score over two games and 140-plus minutes says much about this one.

The blade of the knife was still sharp by the time Jimmy White called time here, when Milford had the bare minimum to spare.

Kane Barrett (1-5) and Man of the Match Connor Gormley (1-2) kicked 2-7 between them for Milford and Aodh McCormick’s team came from five points down at half-time to get their hands on the silverware.

Just 12 seconds into the new half, Barrett scampered through the middle in a move that stemmed from the throw-up. As Barrett Went to ground, referee White had no hesitation in awarding a penalty.

Gormley stepped up and smashed the ball beyond Mulreany to give Milford a way back.

Barrett landed an inspirational score after surging in from the left wing and stacked on a free to bring his men to within striking distance.

Crucially, though, St Naul’s would score just one more point between then and the end.

Gormley swung over to inject new life into Milford and Ronan Docherty evened the sums again eight minutes from the end.

Ryan McMahon and Rory O’Donnell helped give the Moyle View men the edge around the middle in those crucial moments and Gormley really stood tall for the winners and that brilliant point was just the spur they craved.

Two from Barrett gave Milford something to hold onto and they had to cling on for dear life when Barrett was, somewhat harshly, black carded in a frenetic finish.

Somehow, Milford prevented another goal for St Naul’s, who laid siege on the Miford square and Ian Campbell’s fisted point was all they could muster.

Milford took the running when Barrett got in for a somewhat fortuitous goal. After seeing an attempt come off the goal-line just seconds earlier, Milford picked up possession through Gormley, who asked the question of Barrett.

The Milford talisman saw his shot deflect past Mulreany for a 1-2 to 0-2 lead.

From there, St Naul’s hit back and Milford wouldn’t score again until Gormley’s penalty in the first minute of the second half.

Daniel Brennan – who scored 1-7 for the Mountcharles men last weekend – led the charge for St Naul’s with three points.

On 28 minutes, St Naul’s got a goal that looked like it might be enough to stymie the Milford challenge.

Mogan worked a clever give-and-go with Martin Breslin, dropped the shoulder and riffled his shot past Gavin McFadden, who denied St Naul’s on a couple of occasions with superb saves.

Mogan and Brennan kicked points to give St Naul’s a five-point interval lead.

Milford were cursing some spurned chances as they headed down the tunnel. Serrinha prodded wide and Barrett had one taken from under the bar and they’ll have felt they should have had more than the one three-pointer in that opening half.

Milford came good, inspired by that Gormley penalty, and their dinner dance, which is on tonight in the Mulroy Woods Hotel, just got an extra reason for celebration.