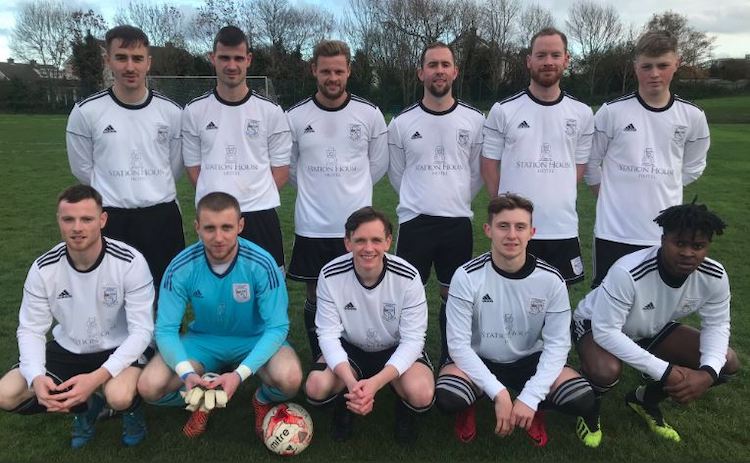 Letterkenny Rovers eased into the fourth round of the FAI New Balance Intermediate Cup with a comfortable win over Pegasus/St James’ Athletic in Dublin.

BJ Banda’s brace in the first half sent Eamon McConigley’s men on their way with second-half goals from Conor Tourish, Darren McElwaine and Kevin McGrath sealing the deal.

Banda struck after just three minutes. A Lee Toland corner careered off the far post. Declan Sharkey recycled and his drill into the box was turned in by Banda, showing his predatory instincts.

Banda doubled the advantage in the 37th minute. Again, a Toland corner caused all sorts of trouble for Pegasus/St James’ Athletic ‘keeper Steve Quinlivan. Sharkey once more did well to keep Rovers in play and his deflected cross was headed in by Banda.

Five minutes before the break, Banda fluffed his lines when presented with a chance of a hat-trick and an opportunity to put the game to bed. From McGrath’s cross, Banda might have headed in, but the striker elected to take a touch and shoot, but the chance was gone.

Ian Dunworth had the best chance for the hosts in the first half, flashing just wide.

With just 40 seconds gone in the second half, the Dubliners were given a glorious chance back into the tie and took it.

Referee Paddy McNeill adjudged Tourish to have handled Liam Manean’s shot and awarded a penalty that was dispatched by Dunworth.

It took a big intervention from Ryan McConnell to clear the Rovers lines after Rory Kelly palmed away a Manean free.

Rovers made a double substitution on 67 minutes with Darren McElwaine and Matty Harkin introduced. The change almost paid instant dividends, but a brilliant Quinlivan save denied McElwaine, who got on the end of Harkin’s deliver.

However, an assured finish by McElwaine, to the bottom right corner, extended the advantage before McGrath completed the scoring, heading in from a Harkin cross.