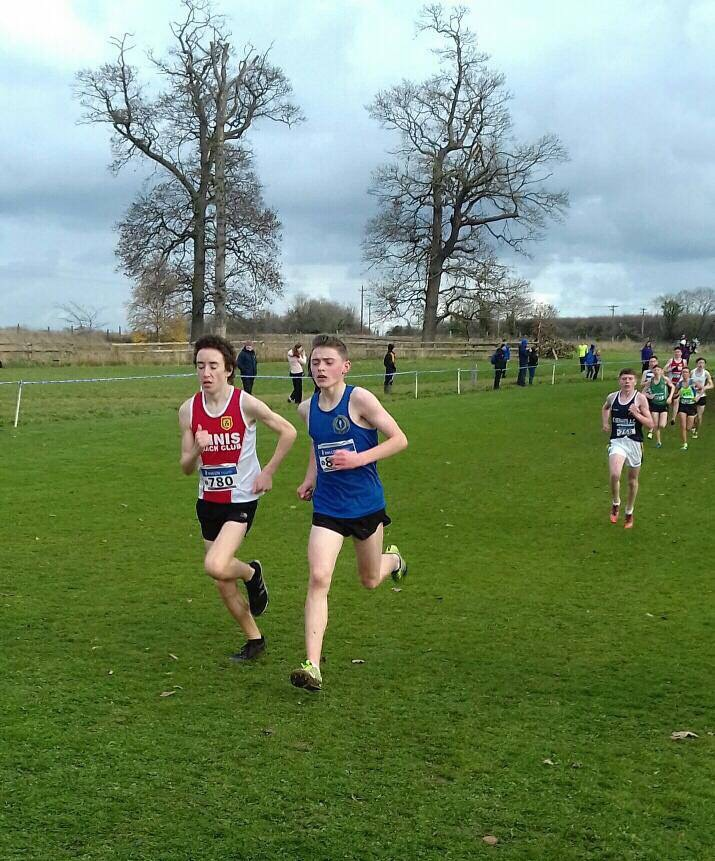 Five medals for Olympian YAC at All Ireland Cross-Country Championships

With the best 12 individual athletes, top three teams and best three county teams from each province qualifying for these illustrious Championships, there was plenty of talent on display with only the best cross country runners in the country pitted against each other.

That meant the competition could not have been fiercer, and Olympian’s relished the opportunity and competed with great heart and walked away mucked to the eyeballs but through hard secured a total of five All Ireland medals.

The first to toe the line was the Olympian’s trio of U12 Girls who had qualified as Donegal team members. In their first ever All Ireland Cross Country Championships Anna Russell 101st, Erin Friel 118th and Orlagh Faul 124th all showed great determination competed fiercely in the older age group.

This was a great first experience at this level of competition and augers well for the girls as they now put their final few weeks of preparation into training sessions for the U11 All Ireland Championships in three weeks time alongside three more members who qualified together as club team silver medalists in the Ulster & NI Championship.

Next up and the first medal of the day came from Boyd Russell in the U14 boys. Still eligible for the U13 category in three weeks time, Boyd showed that he is one of the best cross country runners in the country against older opposition.

He ran amazingly well to come 23rd in a field of 150 athletes and was rewarded for his guts and determination crossing the line as the fifth scorer for the second place Ulster provincial team, gaining him a thoroughly well-deserved Silver medal.

Alongside Boyd, two more of his club team members, like the girls, Finley Bose 145th and Peter Russell 153rd, competed in their first All Ireland’s and gained great experience from the atmosphere and level of competition.

The second medal of the day came from Nuala Bose, who came home as the fourth counter for Donegal U16 girls team, placing 47th individually overall in a field of 130 athletes. Collaborating with her county teammates to be rewarded with county team All Ireland Cross Country Bronze medal, a just reward for her dedication to training over the past few years as she continues to make her steady progress into the athlete we know she can be.

Olympian’s athlete of the Championships, Sean McGinley ran in the U16 Boy’s race. He showed his true class as he bagged himself a full set of All Ireland Championship medals.

It was a great race from gun to tape and as he remained with the leaders throughout it was looking likely it would end in a dramatic finish. In the end, it was, and it was a manic sprint to the finish line where Sean was a clear third.

He was unlucky to miss out on the silver individual medal by a mere 1sec but he was not disappointed with an incredible Bronze individual All Ireland Cross Country Championship medal.

As McGinley was the first counter home for the Donegal County team he also bagged himself a Silver County Team medal as well as Gold Ulster Provincial Team medal for his brilliant efforts.

Tiernan Boyle was Olympian’s final athlete of the day, toeing the line at the Championships. He lined up in a highly competitive U20 Men’s. In what was Boyle’s first All Ireland’s, he gave a great account of himself finishing up 118th and showing his cross-country endurance is going from strength to strength and will stand well to his form when he takes to the roads and track in next years season.

Olympian would like to extend a massive well done to all their marvellous club members, and to all the county and Ulster athletes at the championships.

Training will continue every Tuesday night at 7:00 – 8:15pm and Saturday mornings from 11am until 12.15pm at the Glenswilly pitch.

We are insured to cater for any and all abilities from 7 years of age right up to senior and master’s level who wishes to train, keep fit, have fun, and/or compete at a local to national/ international standard. New members as always are more than welcome.

For further details, please do not hesitate to contact Martin O’ Donnell on 0863838240 or message us via Facebook (Olympian AC) or feel free to come down and have a chat on any of our club training times.