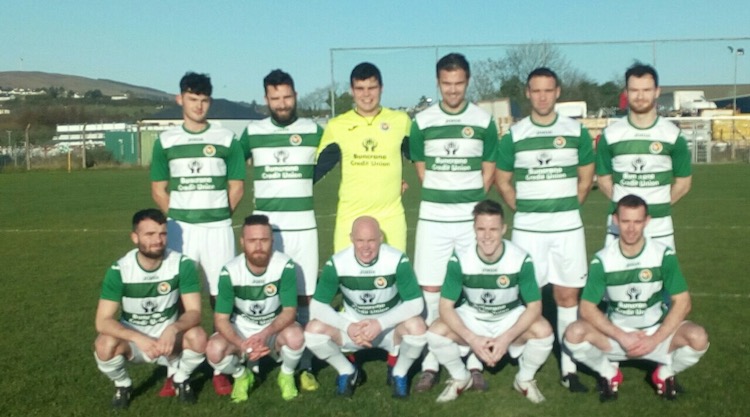 Cockhill kept up their pursuit of leaders Letterkenny Rovers with a facile win over Swilly Rovers at a rain soaked Charlie O’Donnell Sports Grounds on Sunday.

The game got off to an explosive start with the home side being reduced to 10 men in the first 5 minutes when Bart Wesolowski received his marching orders for an off the ball incident.
Despite being a man up, Swilly were dealt a blow with Dylan Hegarty and David Fisher were forced off with early injuries.
Cockhill, despite their numerical disadvantage, dominated the game and it was no surprise when they took the lead on 19mins with a smart turn and finish inside the box from Brendan McLaughlin.
They had chances to extend their lead but Marty Doherty and Ethan Canning missed the target when well placed.
It was 2-0 on 39mins when Mark Moran was released in the inside left position. He unselfishly squared to McLaughlin to double his tally.
The second half continued in a similar vein to the first with Cockhill more likely to extend their lead.
They did just that on with two very similar goals. Both were created by McLaughlin on the right hand side, running at defenders, both resulting in crosses being diverted into the Swilly net. The first a tidy finish from Moran, the second by an unfortunate defender for 4-0.
When all looked lost, Swilly got a goal back out of nothing. Aaron Rogan ghosted in to divert Tony McNamee’s cross past Jason McCallion.
Swilly had their best period at this stage with the game becoming disjointed after a raft of substitutions.
Cockhill weathered this storm and it was two of their substitutes who completed the scoring.
Veteran striker Paul McKinney coolly slotted home when released through the middle by McLaughlin, then Derek Doherty made it six late on with a goal on his comeback from a serious injury.
USL – Cockhill romp to facile win over Swilly was last modified: December 3rd, 2018 by Chris McNulty