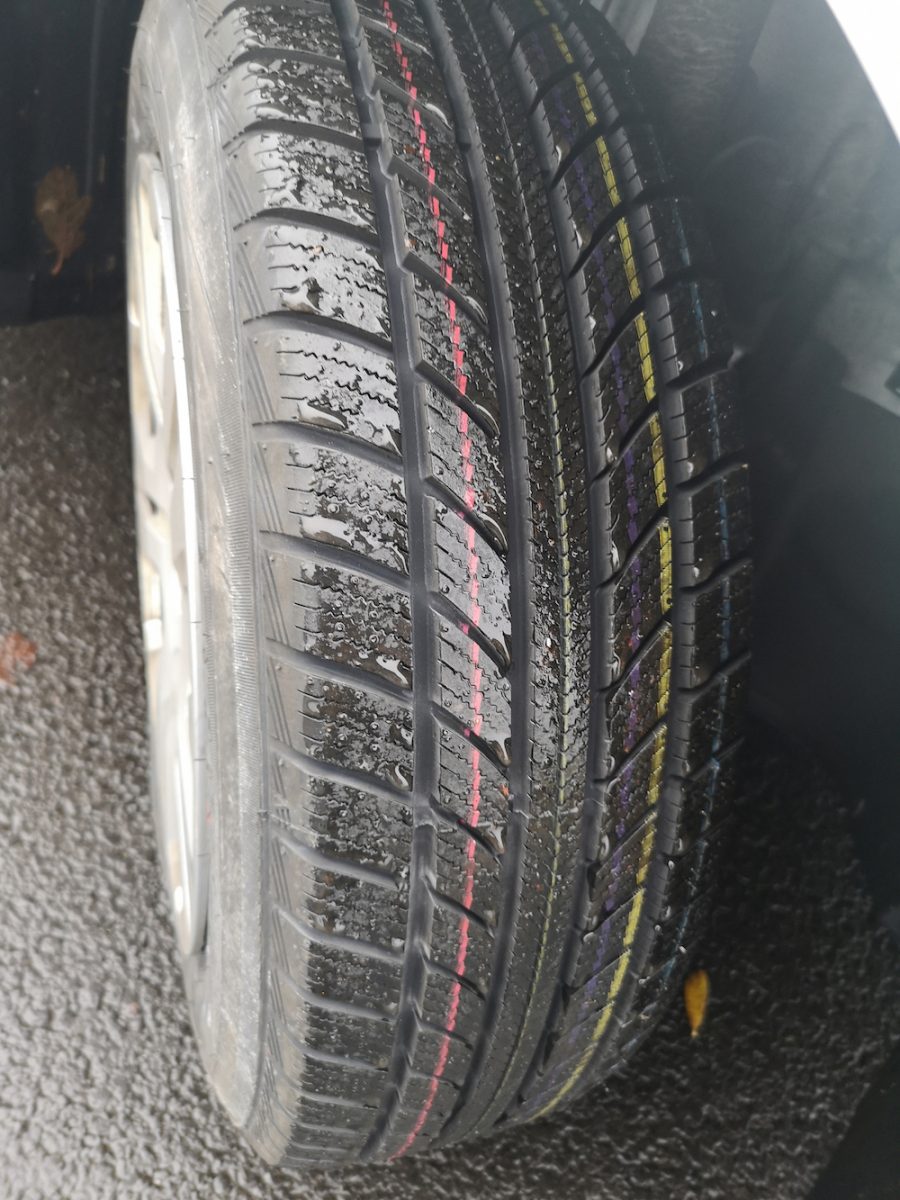 In this week’s Donegal Daily’s motoring column Brian McDaid talks about one of the most important points of contact for anyone who drives in winter.

The safe thing to do when dealing with the problems of driving in snow is don’t do anything, just stay home. Normally, we don’t get that much snow, so it’s low on our list of importance, but that is until the morning we awake to find the countryside in whit. and then the usual plan of action will be ‘to hell with it, I’ll chance it.’

The bookies are offering 6/1 odds of snow on the ground on Christmas day at Dublin Airport. Punters will be taking a punt and placing a bet then watching and hoping the weather turns bad for a white Christmas.

If anyone thinks the stakes are high on that possibility, unnoticed by most they are taking a far bigger gamble when they take their family car out on worn tyres at any time of the year but the risks increase drastically in the cold winter months.

Turkeys are ordered Chimneys are cleaned satellite dishes are tuned in brussel sprouts are purchased, heating oil is topped up and the list goes on as we get everything looking well for the big day. meanwhile back at the ranch tyres on family cars are tested to the limit as we rushed about.

You’ll never hear anyone say I must get them tyres checked or replaced for Christmas. It is only when one of them let you down and goes flat that your attention is reluctantly drawn to them.

Sometimes you have to be on the receiving end of what happens when you put badly worn tyres to the test in cold weather. Just like I did years ago and paid the price. When cars had carburettors they seem to go better on cold nights, cool air seemed to carry more oxygen in it, or so we thought, so our old bangers seemed to go a lot better in turn far better so we pushed them on not knowing that cold weather also had a side effect on the performance.

Its tyres decreased in the amount of grip they had for breaking and steering, ending up with many’s a trip into the ditch with bent bumpers and damaged pride but luckily still here to talk about it.

If you think of tyres having two rolls in life firstly that of the everyday driving from A to B and secondly in an emergency when thing go wrong and someone stops suddenly in front of you or road conditions get poor tyres to take on the extra roll to deal with the emergency its faced with and hopefully steer you to safety. That’s where the condition of the tyre will have a big bearing on the end result.

Last Saturday, I changed from a trusty set of well worn Pirelli tyres to a new set of all-weather one in an effort to make a better contact with the road for the winter months. 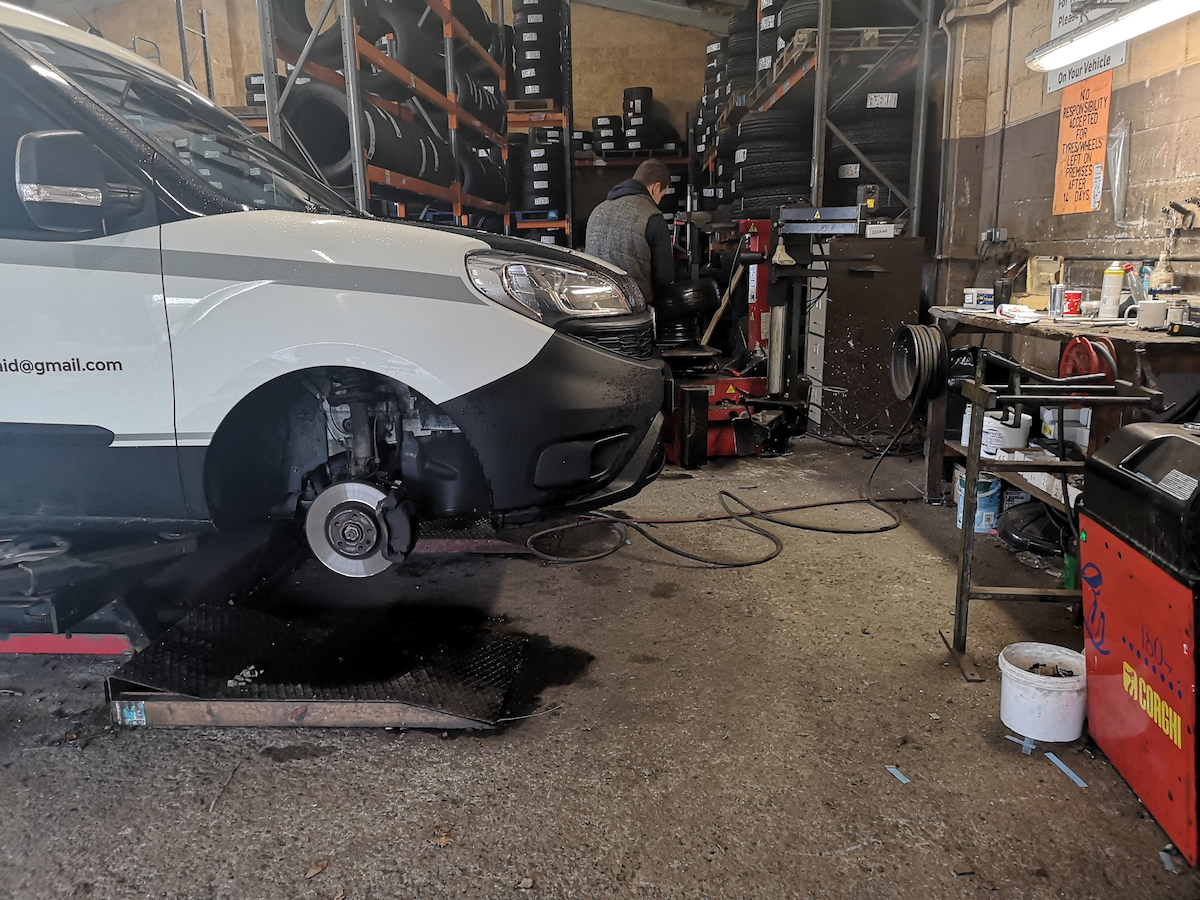 Putting this report together I remember how people prepared for winter when cars weren’t as refined as they are today back then. Antifreeze was tested to see if it wasn’t diluted too much through leaks and then topped up for the winter months.

However, there were problems with sticking thermostats redex to repair radiators, which were like small particles of lead poured in to seal leaking radiators or even cracking an egg into the cooling system. It would do as a makeshift repair and the squealing of a belt slipping were just some of the things that a driver was expected to know about.

Even saving the wrapper of a Lucozade bottle, which were then taped over sealed beam headlight units to see through fog cover roads. And the old faithful loading of the back axle with three or four bags of sand in the boot to get a rear wheel drive car to grip better in the snow, all annual routines completed as winter approached.

Traction control, temperature gauges and sealed cooling systems and warning flashing snowdrops lights are the guardians of drivers on the road today. They never have to get out of the car to check anything anymore. meanwhile, tyres may have developed but they still operate and wear the same way as they did when they were first invented.

Nowadays fewer and fewer people are seen regularly checking the air pressure or the conditions of their tyres.

For most motorist, the only time they look at their tyres is when they have a puncture and even at that if it’s a slow puncture some would nurse it on until it would no longer hold the pressure. Our Fiat Doblo has covered 67,000kms. Most of its original set of Pirelli give or take a puncture or two.

Since the tyres were fitted on Saturday at Ulster Tyre Centre in Letterkenny the temperature has plummeted this week. although driving on all-weather tyres feel no different really than driving on the normal everyday tyres but I do feel more confident and prepared when the weather gets worse.

In the past, the old type winter tyres were also called “town and country” tyres could both be noisy on the road and were prone to giving off a vibration at speed because of their robust pattern. Now it is different these tires feel no different but it nice to know they will come into their own when the snow lands as they cut a path through the winter roads.

Now there is little or no difference to the driver when driving on winter tyres. Most taxi drivers will have a spare set of wheels, which all-weather or snow tyres are fitted to and sitting on standby. These are in place this week in most cases to prepare for the winter months.

Winter tyres have a different thread pattern to normal road tyres with more blocks and cross cuts on them to move water and slush out of the way and in snow they make a better imprint in order to get a bit of grip to move forward.

The most important benefit of winter tyres is that they still work at a lower temperature so that the tyre is still gripping the road when the compound of a summer tyre starts to freeze up and lost its grip.

If you think of the coolant or antifreeze in your car and how it changes the boiling and freezing point where water would normally start to freeze up.

Winter tyres do the same thing by moving freezing point so that tyre still operated and gripping the road when normal tyres have gone off and the rubber starts to lose its grip.

That’s the positives that you can do to your car reduce some of the risks of driving in the winter. 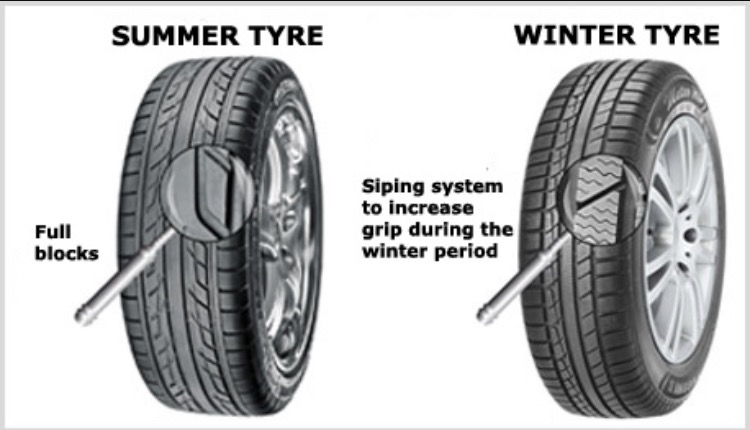 The difference in Winter and Summer tyres.

Personally, you can reduce the risks more by planning your journey times by leaving a little more time to get from A to B and reducing your speed or even asking yourself do you really need to make that journey in the first place.

A lot of drivers may think these efforts are over the top and if your tyre makes it through an NCT or a Garda roadside checkpoint your not breaking the law, so why bother?

Consider some of the following.

That small area has so much to do and for most of its life, it does its job so well that we never give it a second thought. However a tyre doesn’t know when its winter it can’t see the snow coming on the road ahead, but we can.

Even when there is no snow roads become very greasy in long spells of cold weather so the friction or grip you were used with is reduced. 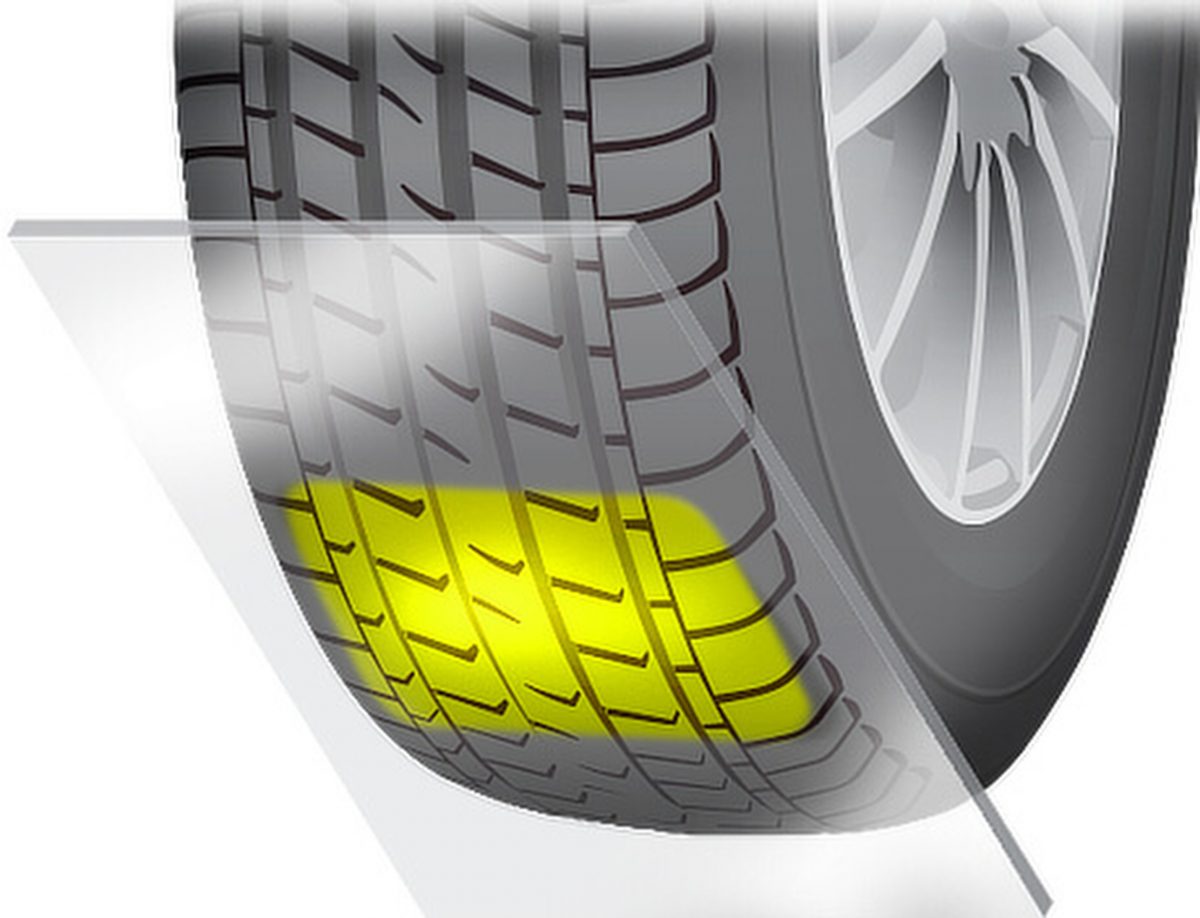 A view of how little of a tyre that makes contact with the sound. This is called the contact patch which is smaller than the footprint of an Adults show.

A good tyre, no matter what kind it is, will work to move water out of the way so when the next part of the tyre rolls on to the surface so the contact is the best it can be. Work or badly inflated tyres break that chain of events when a tyre has to turn or brake in an emergency.

All these chains of the event have to be placed if a tyre has any chance of working right in that extreme condition and this is the point of contact where all the negatives will add up or if you have prepared the positives will benefit you.

My winter tyres cost me the same price as normal tyres. and where normally I want my tyres to last as long as possible I want my these tyre to wear all through the winter and keep as good of a grip as possible on the wet and slippery dark roads until the spring arrives again.