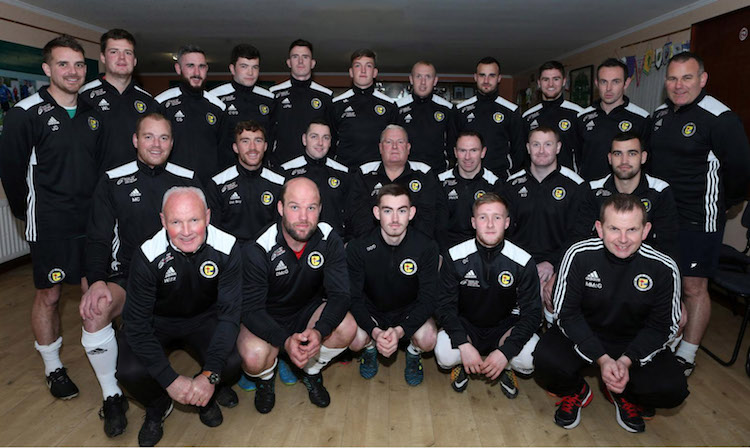 Both the Donegal and Inishowen leagues progressed from Group D of this year’s Oscar Traynor Trophy after Donegal’s 2-2 draw with Sligo/Leitrim at the Showgrounds.

by David Goulden at the Sligo Showgrounds

Kevin McHugh had given the visitors an early lead, before Sligo/Leitrim fought their way back into the contest courtesy of Keith Nibbs. McHugh had the Ulstermen back in the lead before the break when he converted his own penalty.

But Sligo/Leitrim were to have the last say on the stroke of full-time as Tyler Stallard leveled the game late on.

The result sees Donegal top the group with four points, while Inishowen follow their neighbours into the last eight.

The away side hit the lead just four minutes in. McHugh beating Aaron Murrin to the ball ten yards inside the Sligo/Leitrim half before neatly placing his effort past the oncoming Sergio Gomez.

John Loftus’ side, who reached the last four of this competition last season, took their time in settling although enjoyed a strong spell midway through the opening half.

Michael Mullin spilled Gary Armstrong’s corner into a forest of waiting players before a Sligo/Leitrim man got a foot to the ball which looped over Mullin before bouncing off the top of the Donegal crossbar.

Armstrong was involved again shortly after when he teed up Mark McGoldrick, but the Carbury man, one-on-one with Mullin, couldn’t find the necessary power to find a way past St Catherine’s stopper.

The Connacht men then deservedly leveled the game on 22 minutes. Nibbs tumbling as he met Paddy Woulfe’s cross to beat Mullin with an improvised diving header.

Raymond Shields’ charges dragged themselves back into the lead seven minutes from the break. Gomez bringing the experienced McHugh to the ground in an effort to poke the ball off the toe of the ex-Finn Harps striker. The same man had no problem in sending the Glenview Stars net-minder the wrong way from 12 yards.

Seamie Friel was unfortunate to see his drive from 25 yards whistle over Gomez’ goal early on, winning what was a low-key second half.

Mullin was on hand just past the hour to again deny McGoldrick as he rushed off his line to block away the attacker’s effort after he latched on to another Armstrong through ball.

Sligo/Leitrim changed to a 4-3-3 with McGoldrick, Stallard and Ryan McManus leading the attack. The move was rewarded on 90 minutes, although it took three attempts to breach the Donegal goal-line.

Mullin did well to push away Stallard’s initial effort before a Donegal leg somehow managed to keep out McGoldrick. But Stallard was well placed to force the ball across the line with his second strike at goal after the ball fell to him just yards from the target.