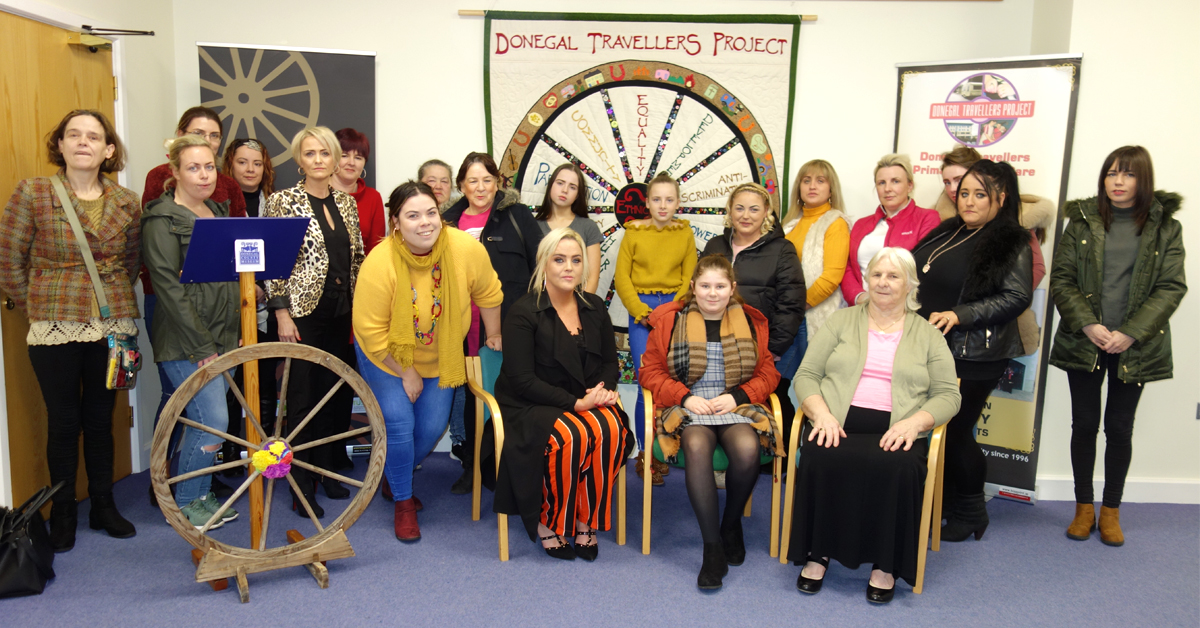 A spectacular pictorial quilt created by more than 100 Traveller women and girls from all over Donegal has been launched at Donegal County Museum.

It was unveiled on International Human Rights Day last Monday and will be on display at the museum until the middle of January.

The project was conceived by DTP as a way of bringing Traveller women together to talk about the issues affecting them as Travellers and as women.

Its success in accomplishing this was reflected in remarks by Maire O’Leary, a former HSE Social Inclusion Manager who officially launched the quilt.

Ms O’Leary said: “What’s really important is that because you were together and spending time together, you got to know each other and there’s solidarity between you now.

“There’s so much discrimination against Travellers, against women, that we really do need to stick together. So to have that bond while you were making the quilt is a really great thing.” 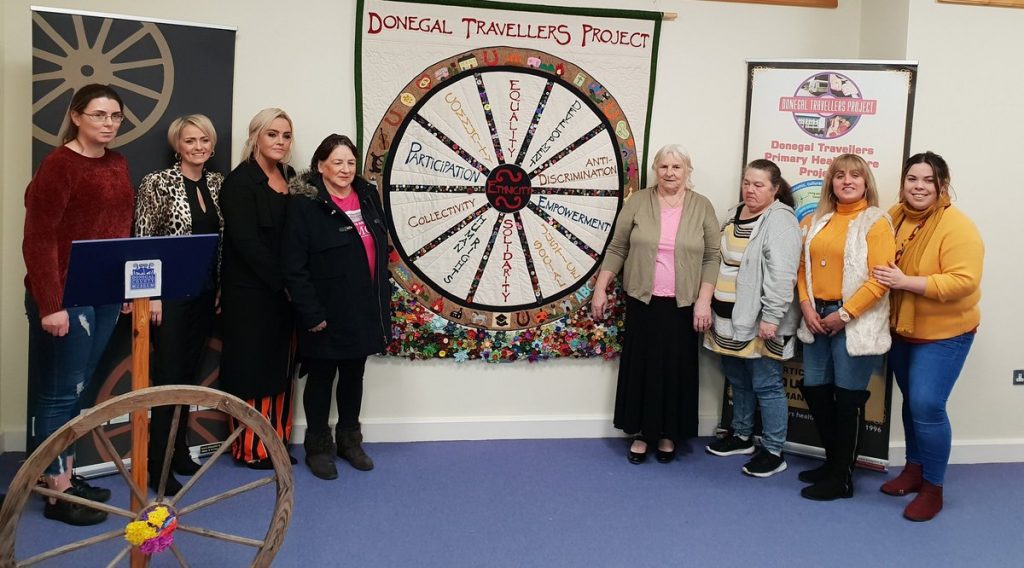 The intricate design of the quilt features a large wagon wheel surrounded by other symbols of Traveller culture both past and present, including caravans, horses, and campfires – but also houses, letters of the alphabet, and graduate caps.

“Very often it’s said that it’s part of Traveller culture not to get educated,” Ann Friel, DTP Primary Health Care Team Leader, said to the 50 people present at the launch.

“Well, I’m sorry, that’s not the case, and you can see in the quilt the symbols for education – from ABCs to graduating – because Travellers want to get an education and we are hungry for education. So the quilt represents the past, but also the modern world that we are excited to be living in today.”

At the bottom of the quilt are dozens of colourful, six-petalled fabric flowers with button centres that were made by women and girls in their own homes and while participating as members of DTP women’s groups. 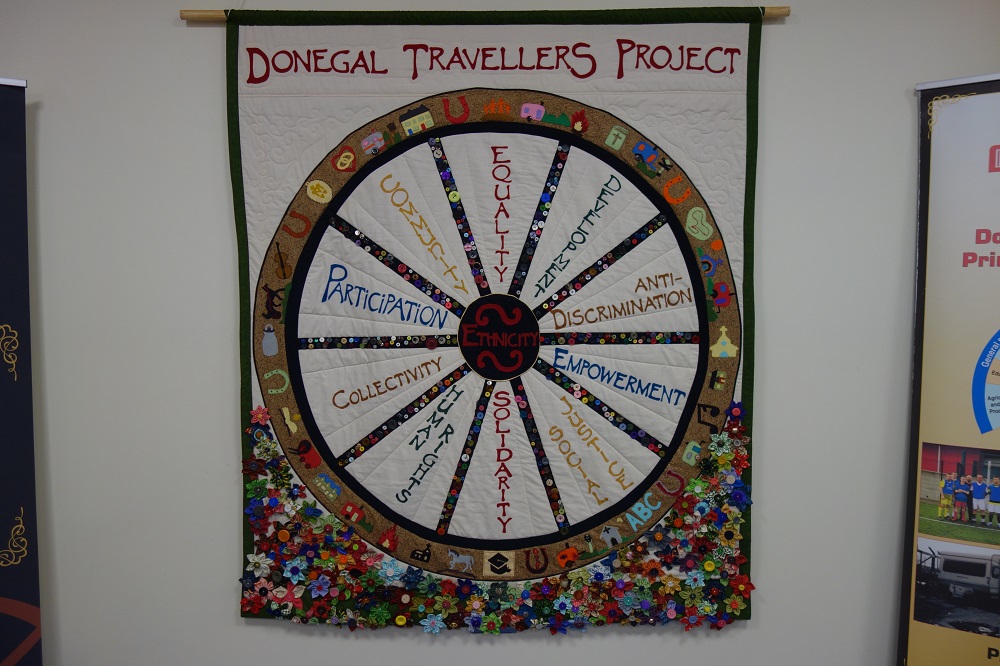 DTP’s “Beoirs, Lackeens, Whiden” (“Women, Girls, Talking”) Quilt will be on display at Donegal County Museum in Letterkenny to the middle of January.

Chrissie McGinley, a DTP Community Health Worker, explained the symbolism of the flowers and the buttons on the quilt, which was supported by the Department of Justice and Equality.

“Traveller women used to make paper flowers to sell, or hawk, for a living,” Chrissie said.

“The buttons in the flowers represent a time when Traveller women who met in the road would swap buttons in friendship, as a way of remembering the other person. A button always had a story to tell.”

Before the start of the launch women and girls who had helped to create the quilt gathered around it, pointing out the flowers they had made to family and friends. 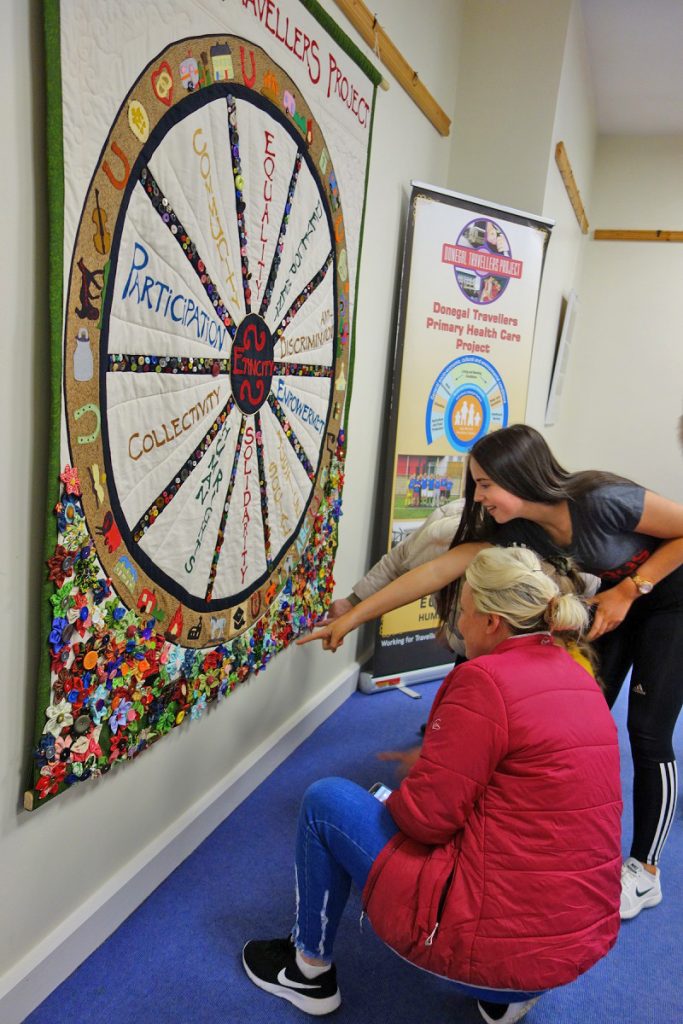 Mary Ward, 14, showing her mum, Geraldine, the flower that she made on DTP’s “Beoirs, Lackeens, Whiden” (“Women, Girls, Talking”) Quilt.

Mary Ward, 14, a participant in a DTP/Involve Young Women’s Group, and her mum, Geraldine, a DTP Gender Equality Programme participant, were among them.

“That’s my flower that I made of cloth,” Mary said of a delicately patterned green and yellow flower with an orange button. “It’s to show our culture.”

“I enjoyed making a flower,” Geraldine said. “At the beginning I couldn’t understand how this was all going to be put together. It came out beautiful, really beautiful now. It’ll be there for a lifetime.” 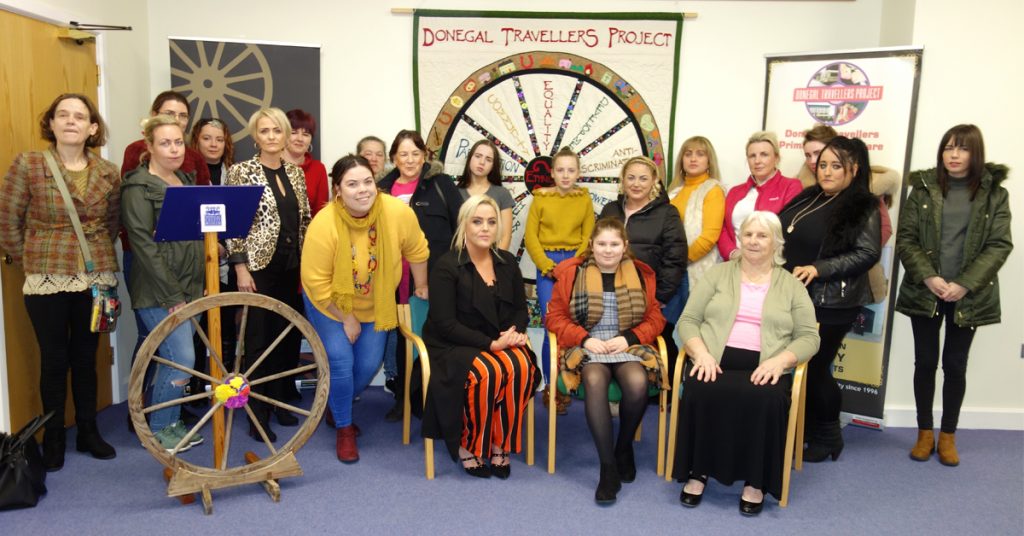 The quilt was designed and created in collaboration with Gaye Grant of The Fennel Shed Patchwork Studio in Buncrana, who told the audience she’d had some concerns about the project when DTP staff first discussed it with her last July.

“Group quilts are quite hard to get over the line because sometimes part of the group falls away and sometimes people drag their heels,” she said. “In this case I can honestly say that not at any time did I come across that. There was just enthusiasm and joy and craic every step of the way that made this quilt come together.”

Additional launch speakers included Ann McGrory, another DTP Gender Equality Programme participant who made a flower for the quilt.

“When I started in the programme I was very shy and lacked confidence,” Ann said.

“I would no way have stood up here to talk. I am so proud of myself that I stayed and finished the programme. Some of the women in our group are very outspoken, some shy like myself, and all have different beliefs and values. I think gender equality means to me that it is okay to be different as long as everyone is treated equal. We all have the right to be equal.”