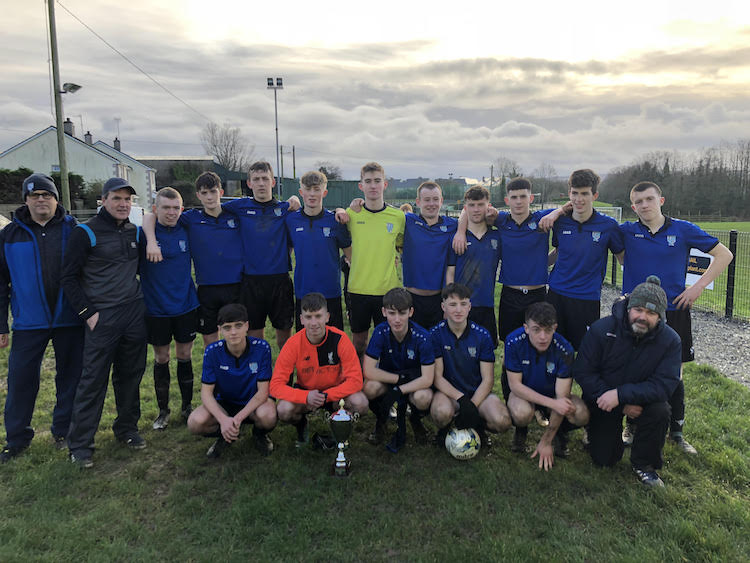 Dunfanaghy Youths were crowned Donegal Youth League champions thanks to an emphatic win over Lagan Harps at Orchard Park this afternoon.

By Chris McNulty at Orchard Park

Luke McCarry and Edward O’Reilly bagged a brace each, with sub Sean Geaney also on the mark as Danny Ferry’s men won the title for the first time.

They didn’t make life easy at times and they led only 2-1 having bossed large swathes of the first period, while Kyle McGarvey saw a second-half penalty saved by the Lagan goalkeeper Oisin Bonner.

McGarvey was denied early in the second half after Dan Ferry was upended by Joshua Haye.

Lagan broke and remarkably might have drawn level, but Dean Murry, after rounding Oisin Cannon, saw Patrick Moffett get back to block on the line.

Sub Carlos O’Reilly drew a super save from Bonner with his first touch, but McCarry coolly turned in at the near post on 58 minutes to give his men a little more breathing space.

Twelve minutes from the end, Geaney headed home from Eanna McCafferty’s cross and O’Reilly thundered home the fifth late in the game. 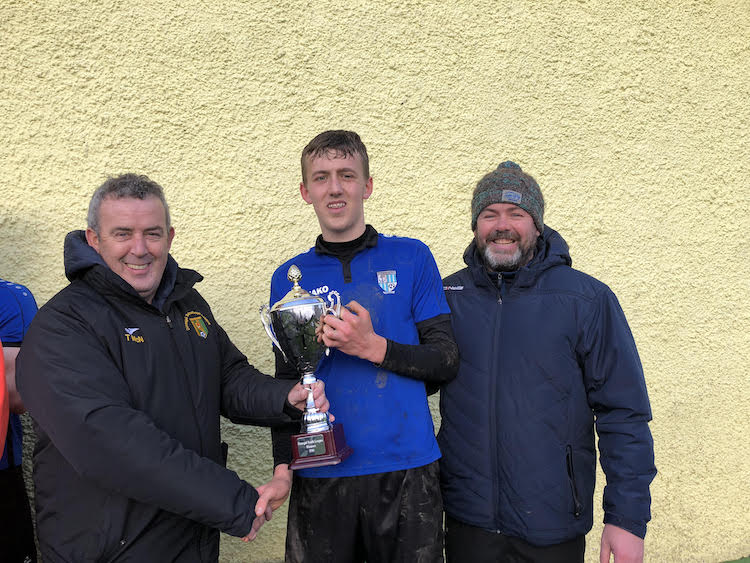 Dunfanaghy, having dominated the early exchanges, opened the scoring in the 29th minute when McCarry rose to meet a Ferry cross and direct a delightful header beyond Lagan ‘keeper Bonner.

Seven minutes later, they doubled the lead. McGarvey’s ball from the right was inch-perfect for O’Reilly, who wonderfully steered his header across Bonner to the far corner.

Lagan’s ventures into Dunfanaghy territory were scant, but the hosts pulled a goal back as the unfortunate Paddy McGinley flicked Hay’s cross past his own ‘keeper.

It was a lifeline for Lagan, who looked out of the game when O’Reilly netted, in keeping with the start to the contest. 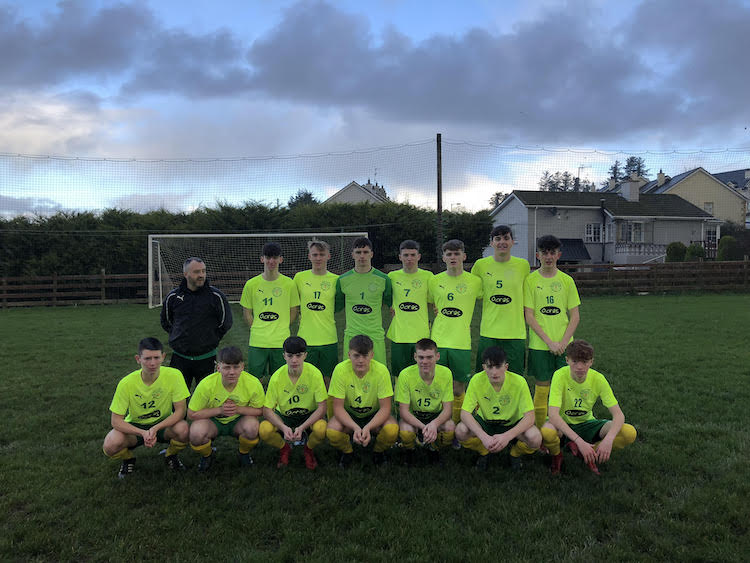 Calvin Murray tried his luck, but had too much height on his attempt before O’Reilly nodded narrowly wide after being picked out by Ferry’s whipped cross from the left flank.

Dunfanaghy could have gone in front when McCarry broke free, but Bonner was out to make the save at the feet of the Dunfanaghy attacker.

Lagan breathed a double sigh of relief in the 20th minute when, first, McCarry struck the inside of one post with a delicate chip and, from the rebound, Ferry riffled off the other post.

McCarry was thwarted by Bonner before, finally, McCarry and Dunfanaghy made the pressure pay for the opening goal of the game.

The shortened season, to allow for the transition into ‘calendar year football’ for this grade in 2019 has been competitive with a handful of teams having been in the hunt, but Dunfanaghy arrived in Manor knowing that a win would see them crowned champions for the first time.

Lagan, too, had designs on winning it, with the mathematics still allowing a chance for Bonagee to sneak under the door before the start of today’s action.

Lagan almost equalised against the run of play, but Noel Donnelly’s crisp effort from the edge of the box cannoned off the post.

Seconds later, Dunfanaghy advanced for the second and it seemed as if they’d stroll. But Lagan hit back and battled to the finish, with Gavin Murray’s young charges giving a fine account of themselves during their first season at this grade.

For Dunfanaghy Youths, the team without a home – earlier this year they had to vacate their pitch of 25 years at Kill – it was a magnificent way to end what has been a difficult, yet successful 2018.