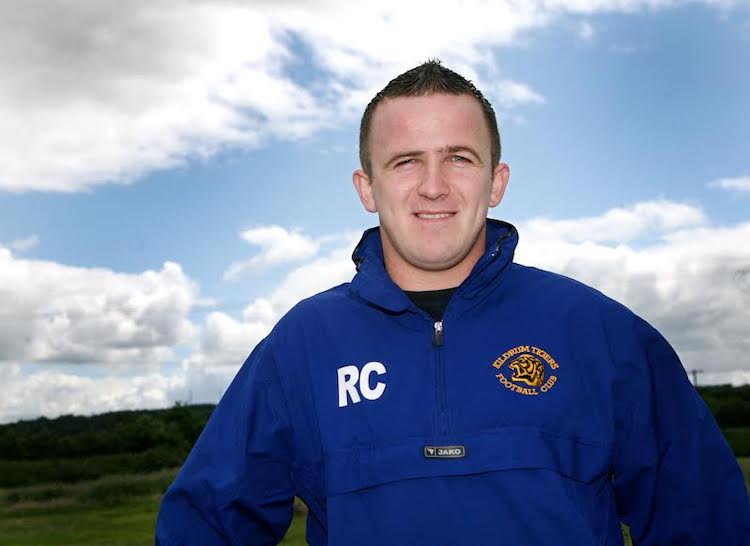 Ronan Coyle hangs up the boots to end an illustrious reign

“The boots are hung…” begins Ronan Coyle, as if to affirm that, yes, he has retired from football.

At 38, he has the look of a man who could still terrorise defences, but Coyle has pulled the pin.

After over a decade in the Ulster Senior League, where he forged a reputation as one of the best strikers to play in Donegal, Coyle has called time having returned to his home club, Aileach, in the Inishowen League.

A Cup treble of Ulster Junior, Buncrana Credit Union and Charlie O’Donnell Cups gave Coyle what might have been, at the end of last season, a fitting swan-song.

Perhaps caught in the emotion and elation of those wins, he came back for another go. It wasn’t that the stardust had waned this time.

“The fight and the hunger just weren’t there,” says Coyle, who won five Ulster Senior League titles – two each at Quigley’s Point Swifts and Kildrum Tigers after one with Finn Harps Reserves – during a stellar career. 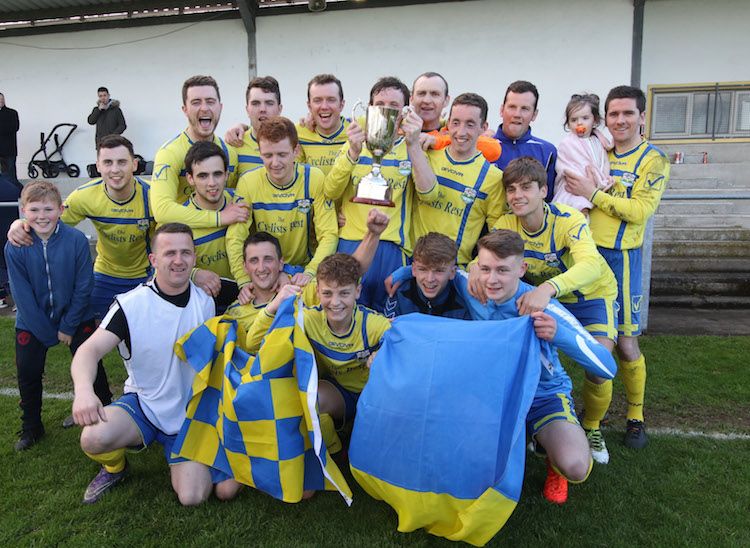 “I said I’d give it a go again this year, but I played two or three games and just didn’t feel it anymore.

“I’m 38 and I’m in alright shape. Last year drove me on, we were getting better and better. It was amazing to win the treble. We really pushed, but we didn’t win the League. Winning the three Cups was a fantastic way to finish.

“I wanted to win all the time. Winning titles is hard enough, but retaining titles is even harder. Overall, when I didn’t feel the hunger, that nailed it down for me and I had to call it a day.”

In 176 games in the red and black stripes of the Tigers, Coyle scored a stunning 209 goals and was the Ulster Senior League’s top scorer for five consecutive seasons (it would have been six only for Stephen Gregg of Drumkeen beating him by a goal in 2003/04).

“The move to Kildrum was the best move I made in my career,” he says.

“As a striker, you’re there to score goals. That’s the job you have and I had my best football at Kildrum, without a doubt.

“Raymond McDaid was the Kildrum manager and he was a massive influence. His man management was unreal. 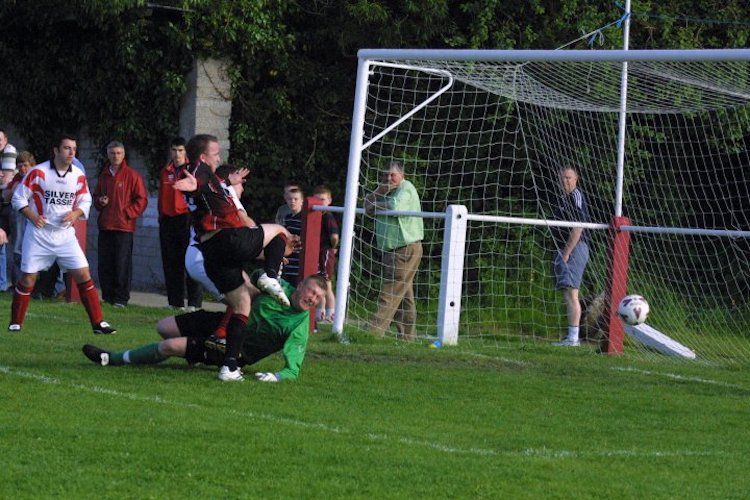 “He drove us on so much. Every season I was there, he was behind me the whole time.

“He gave me so much confidence and gave me a kick up the arse when I needed it.

Coyle won two USL titles at Kildrum, but his abiding memory, 11 years on, revolves around the one that got away.

Before a bumper crowd at St Johnston’s Station Road Park, Kildrum hosted Avondale, the Intermediate Cup kingpins from Cork, in a semi-final. Coyle flashed a warning shot across Avondale’s brows with a deft ninth-minute lob, hooked from the goal-line by Noel Hartigan at the last second.

Barely 15 minutes later, Coyle’s afternoon, his season – and with it, Kildrum’s Cup hopes – were cynically ended all in one swoop of the leg of John Cotter, the then Avondale midfielder who’s now assistant manager of Cork City.

“He just crushed me,” Cotter says.

“That semi-final defeat is still hard to take, 11 years on from it. That was the worst of all.

“I have watched it back and I still cringe. I’d still put it on the odd time. I was very lucky the leg didn’t break.

“Maurice Toland and my dad were in the dressing room with me …I was just sitting there in tears. That’s how much it hurt.

“That was the best intermediate side I ever played on and that run was amazing. It was there for the taking.” 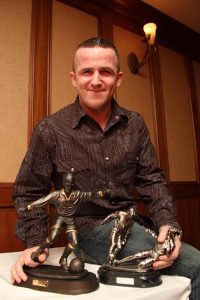 He’d been converted into a striker by Brian McIver after he succeeded Brian Bell, who guided Quigley’s Point Swifts to a pair of League titles in 2001/02 and 2002/03.

“Brian saw it in me, obviously. I was close to going to Kildrum the year they won it, but Brian told me he saw me as a potential number 10 and he convinced me to stay at ‘The Point’, Coyle says.

“I won two leagues with Brian Bell playing midfield, but I always felt I had an eye for goal. Once Brian McIver moved me up alongside Terry McColgan – the best striker I’ve played up front with – the goals just came naturally.

“It was the same at Kildrum and the players there – the likes of Glenn Bovaird and Darren McCready – just made it easier.

In three seasons at QPS, Coyle hit 42 goals and with his spells at Harps and, later, Drumkeen taken into account, his total goals tally in the USL is around the 280 marker. A place in the USL’s 30-year anniversary team was inevitable and was duly confirmed in 2017.

The recipient of the Soccer Award at the 2007 Donegal Sports Star awards, Coyle was courted for a return to Harps ten years ago when Paul Hegarty was the manager.

“It was only as the years went on, there was a regret about that,” he says. “I weighed up my options and spoke to a lot of people at the time. I knew in my own heart and soul that I could have gone back to senior football, but we had something special at Kildrum at the time and we were on a mission.

“Senior football would have been a massive commitment at the time, too and, weighing everything up, it was probably the right decision at the time to stay at Kildrum.”

Coyle and Aileach won an Inishowen League title in 1997, but were relegated the following season.

Finn Harps had taken note of Coyle’s rise and Declan McIntyre was dispatched by then Harps manager Charlie McGeever to sign the teenager. 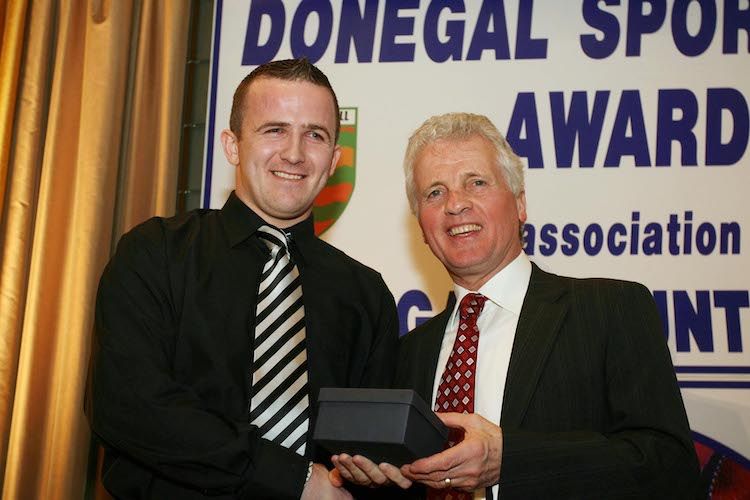 Ronan Coyle of Kildrum Tigers receiving the Soccer award from Mick Dowling in 2007 at the Donegal Sports Star Awards.

His first week as a Harps player was something of a whirlwind. He signed on a Thursday night, scored a hat-trick for the Reserves against Drumoghill in the Ulster Senior League on the Saturday afternoon and that night was part of the first-team squad for a game against St Patrick’s Athletic. 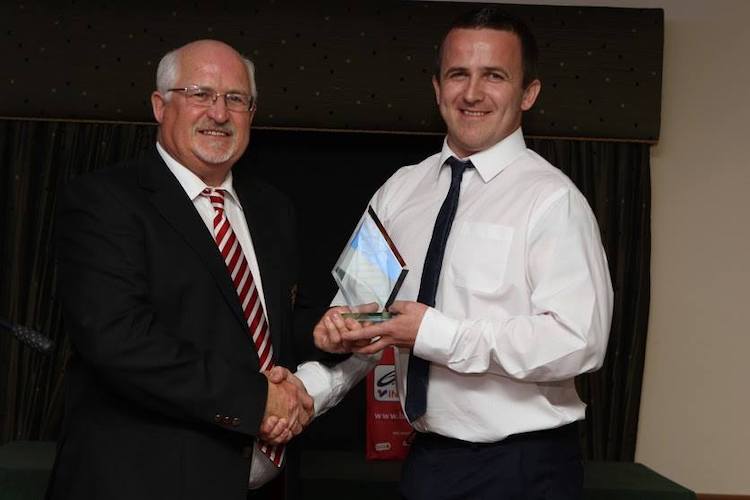 “That was mad,” he says. “I played in a friendly against Peterbrough the Saturday before up in the AUL in Dublin and I signed that Thursday. It was some first week at a senior club!”

A freak car crash near Fintown in 2001 ultimately spelled the end of his time at Harps. Around the same time, doctors discovered an arachnoid cyst on his skull and his pelvis gave him difficulty following the accident.

“I couldn’t run properly for a while,” he says. “My pelvic bone would just pop out. I found out I had the cyst, and it wasn’t brought on by the accident, so it was a fairly worrying time for me.

“I sat down with Jonathan Speak and just said it was best if I moved on.”

His early days were spent not with a football in tow, but a sliotar.

He played hurling up to minor level and played at midfield alongside Owen Hegarty from Tooban for Donegal’s minors.

“Wee Manus O’Donnell had me going since I was six,” Coyle says.

“Hurling was my first port of call. It was only when I was about 14 that I started playing football for Aileach. We went to an Under-16 All-Ireland Indoor final, but even then hurling was the number one for me.”

All through his career, the Coyle family were his biggest supporters. At games near and far, his parents, Kevin and Kathleen, and brother, Owen, were always there.

“I would say all the way through my 12 or 13 years at intermediate level, the missed two or three games,” Ronan says.

“That was only because of family functions or something. From Fanad Head to Cork, they were always there and that drove me on 100 per cent.

“To know they were on the line, I wanted to play well for them. My father was a massive push for me. He gave me comments, good and bad, after every game and that was very important. It’s the best way to have it.. He knew what I could do. The family were always very supportive.” 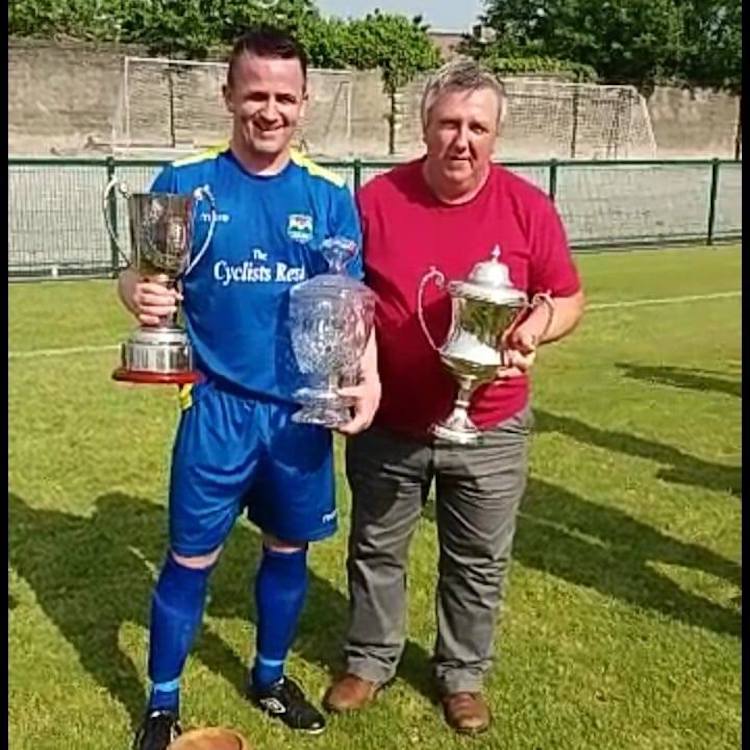 Ronan Coyle with his father, Kevin, and the three Cups won by Aileach last season

To return to the Lakeside to draw the final line in the sand with the Cup treble last season, he admits, was a ‘fairytale’, but for the obsessive winner in him, it is the nagging things he missed that remains to the front of his mind.

He says: “It was special to end up with a treble for Aileach. To finish off at Aileach like that was fairy tale stuff.

“But I would trade the three Cups for the League title. You’re based on your League. People know themselves about winning Cups, but only some others remember. Everyone remembers the League champions.

“It’s probably funny to say that it was bitter-sweet because we missed out on the League. But I just always want to be the top dog.”

There were few before him or since whose bite in the penalty box was as venomous.