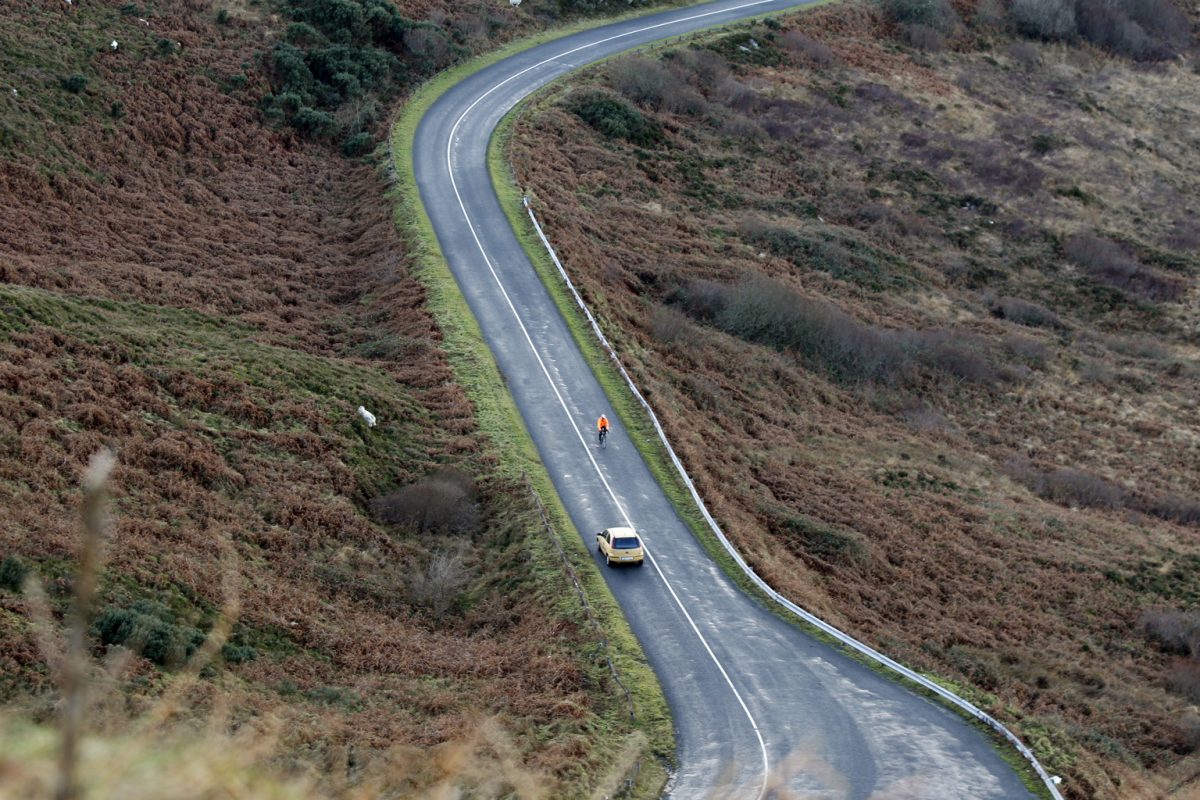 The back-end of the works Ford bounced a bit on the road as it looked for grip across the road from the public toilets at the bottom of the hill.

The driver’s arms were straight as he braced himself with a firm grip on the three-spoke bakelite steering wheel.

He looked both at the road directly in front of him and into the massive hill ahead where the coast road cut its way into the mountain pass.

The brand new Ford engine revved out to its limit as the driver timed each gear change perfectly.

At one stage it felt as if the Ford was airborne for a while, indicated by a sensation you feel in your backside when this happens.

Even though we’re climbing the speed is still gathering as we approach Wilhare’s Corner.

A local rallying hero PJ Wilhare from Cranford made this corner famous when he put his special lightweight fiberglass Mini off the road in a big way on that corner near the hairpin the first year the hill was used for the Hillclimb.

Since then many pulled up at the telltale broken barriers to see if they could figure out what happened that day.

If everything is going right for you, those who have won the hill climb or have won the Donegal International Rally, they will tell you that you will be taking Wilhare’s corner in flat top gear and the bravest will not be lifting

As our yellow Ford approached Wilhare’s, our pilot decided to give the famous corner the respect he felt it deserved and decided to drop down a gear resulting in the new Ford engine revving out loudly briefly before the driver changed it back up into top gear again all of which took most of the momentum out on the wide fast corner. 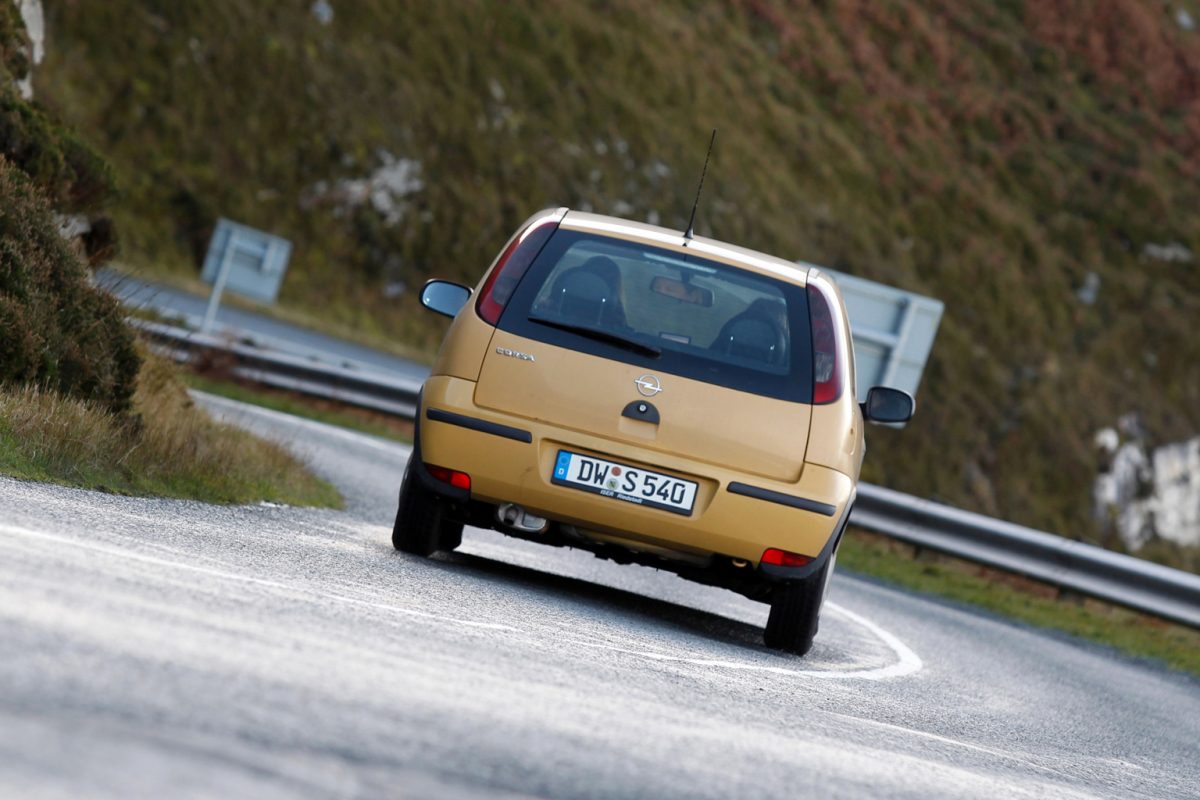 The cautious respect for Wilhare’s corner was a blessing in disguise because as the Ford negotiated the hairpin something started to rattle in the rear.

Was it the drive shaft, the differential, a spring or a shock Maybe? No, it was the fridge! This fridge had slid up to the front of the van.

What were we doing taking a fridge up Knockalla, well that was the reason we were there in the first place. The works Ford was, in fact, a Ford from work, a brand new V4 petrol powered Ford Transit Van in ESB standard Yellow and Grey colours registration number VIH 405. 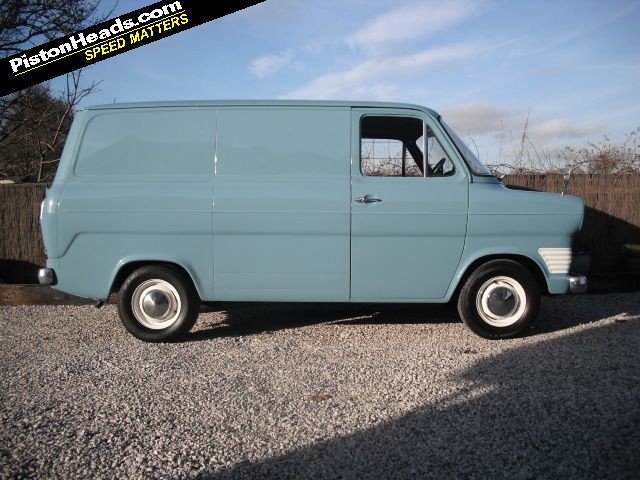 We were out with my father delivering merchandise, as he called it. A fridge was to be delivered to one of the very few houses a converted fort on Knockalla Hill and with us on our summer holidays my father took us to Fanad for the spin. 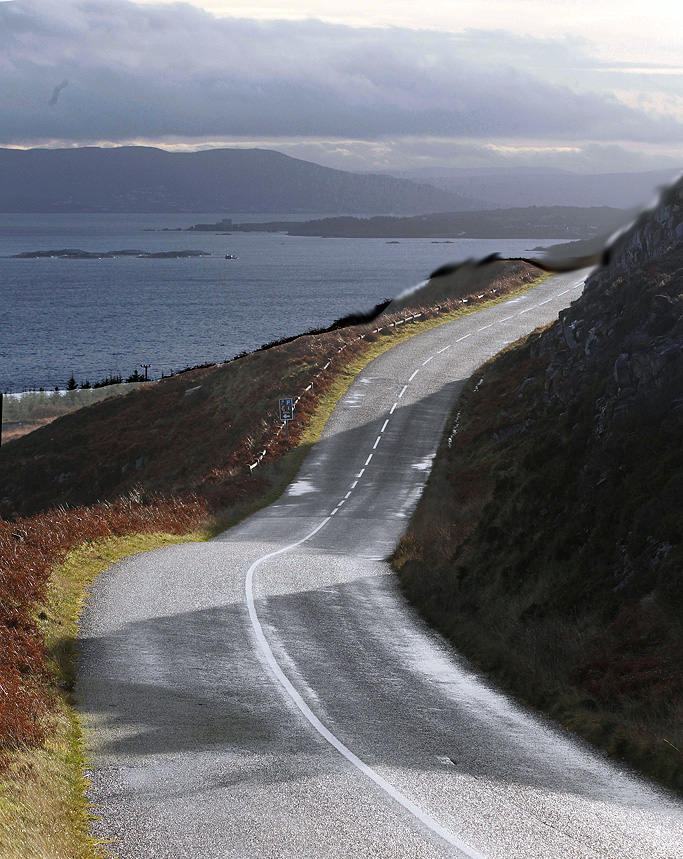 When we got as far as the top of the hill to the lay-by with the view of Ballymastocker Bay we pulled in, not as much to enjoy the view but more to re-secure the fridge, which you could say had “moved in Transit” thanks to the excitement of driving up and around the Knockalla Coast Road.

The fridge in the Ford was destined for the Fort, one of several Napoleonic batteries built along the shores of Lough Swilly centuries before to defend the North West of Ireland.

It was part of a scheme to fortify Lough Swilly and Lough Foyle against a French Invasion during the Revolutionary and Napoleonic Wars.

A couple of centuries on that building was still defending its perimeters as we were to find when we arrived at the entrance only to find the fridge would not fit through the tall narrow gateway into the walled pathway that led into the fort. 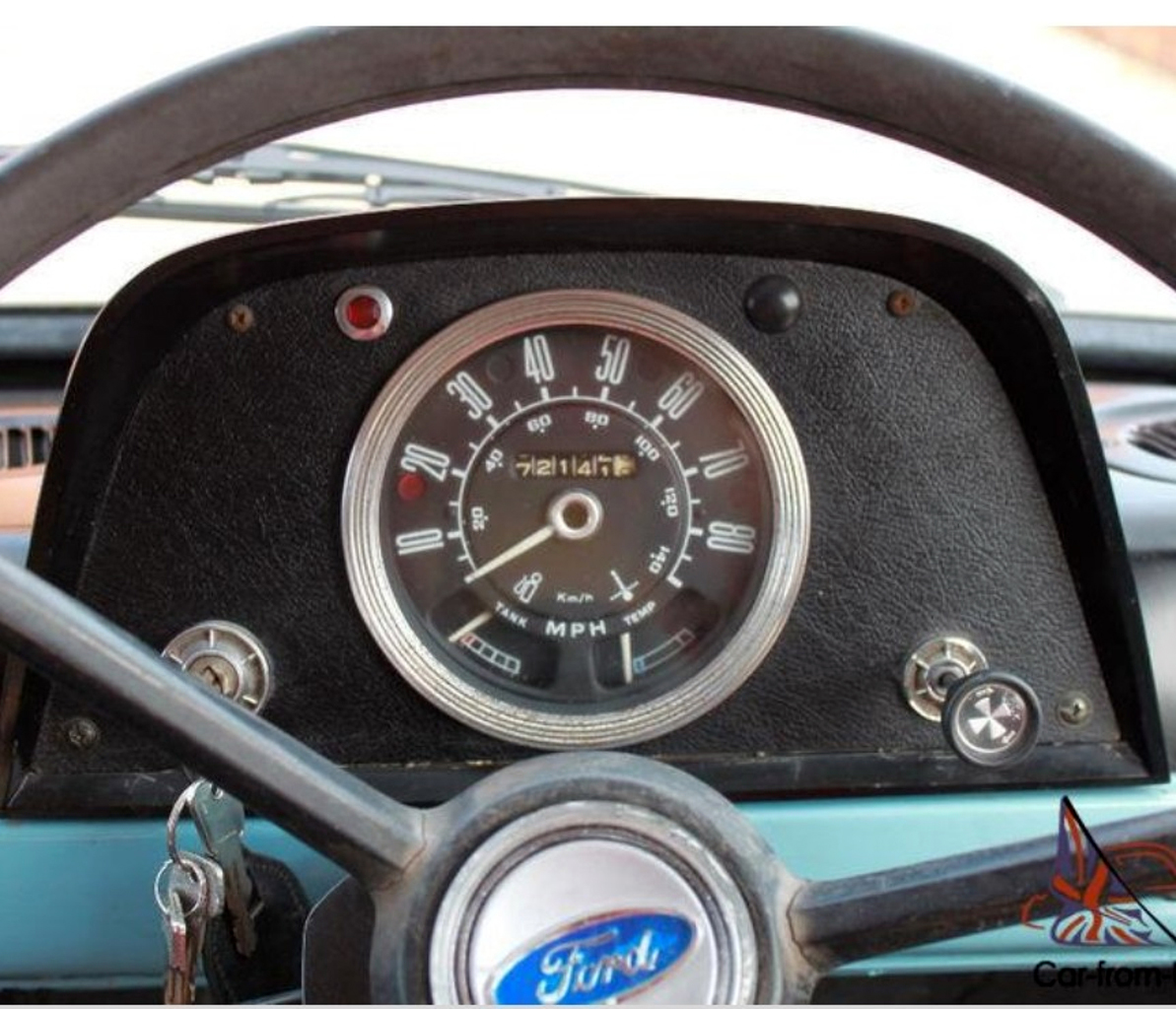 Only when all the cardboard and aero board packing was removed, some of which blew away in the summer breeze down the hillside, much to the amusement of the local sheep who thought it was small white square sheepdogs.

We finally manage to carry the fridge, head high up the pathway and into the house.

When the fridge finally made it out of the Ford and safely into the Fort on Knockalla it was still minus a plug. While we were offered tea with a fantastic view of Lough Swilly my father Fred fitted a plug which he borrowed from their Hoover. 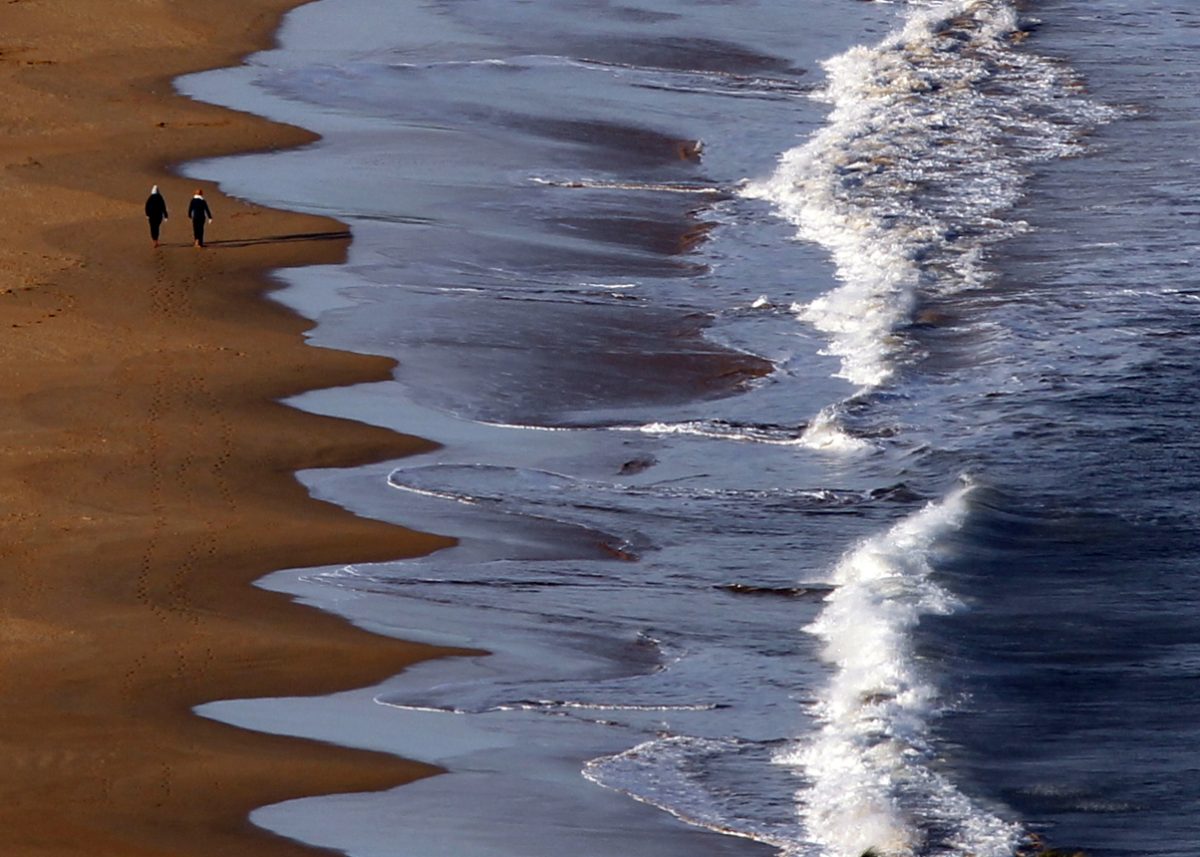 The beauty of Donegal captured from the top of Knockala Coast road. Photo By Brian McDaid.

It was nice to see the light inside the fridge come to life when my father plugged it in. The fridge made all the right rattles as it started to cool everything down.

As we headed away up on to the coast road again in our transit to complete our spin around tithe famous coast road my father stopped further up the road where he showed us where the ESB had to go across the hillside to take the power supply into the old Fort when they first took the electricity. 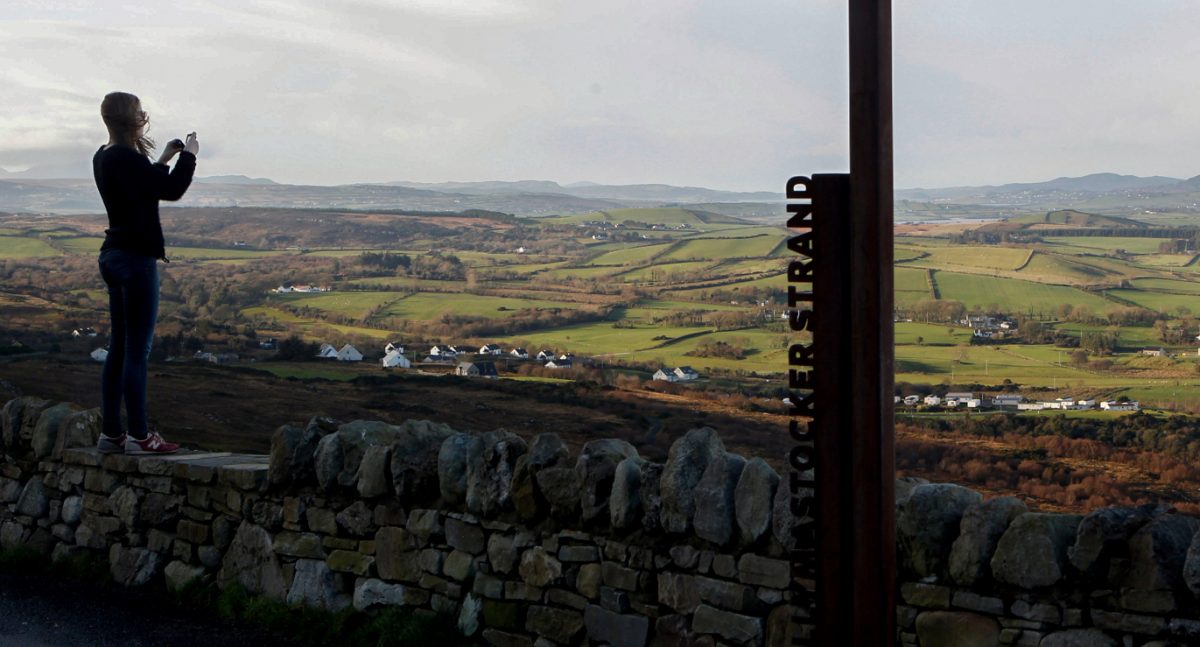 A tourist on the wall at the top of Knockalla taking in the beautiful view. Photo Brian McDaid.

He knew all about the infrastructure of the ESB network here because it was himself that plotted the route for a line into the hill as a young engineers assistant (or a pegger) It was Fred who placed the pegs along the hillside for the crews to come behind him to erect the poles and put in the power supply in not known that he would be back a decade later delivering a fridge to the same address.

Our story may be different to that of the norm of people that travel over this mountain pass and stopped just to take in the great view I have seen the most beautiful Frazer Nash racing car brave the rain to come to Ireland to drive over the pass to people as from as far away as Germany pull up at the top of the hill at the viewing point and enjoy the view. 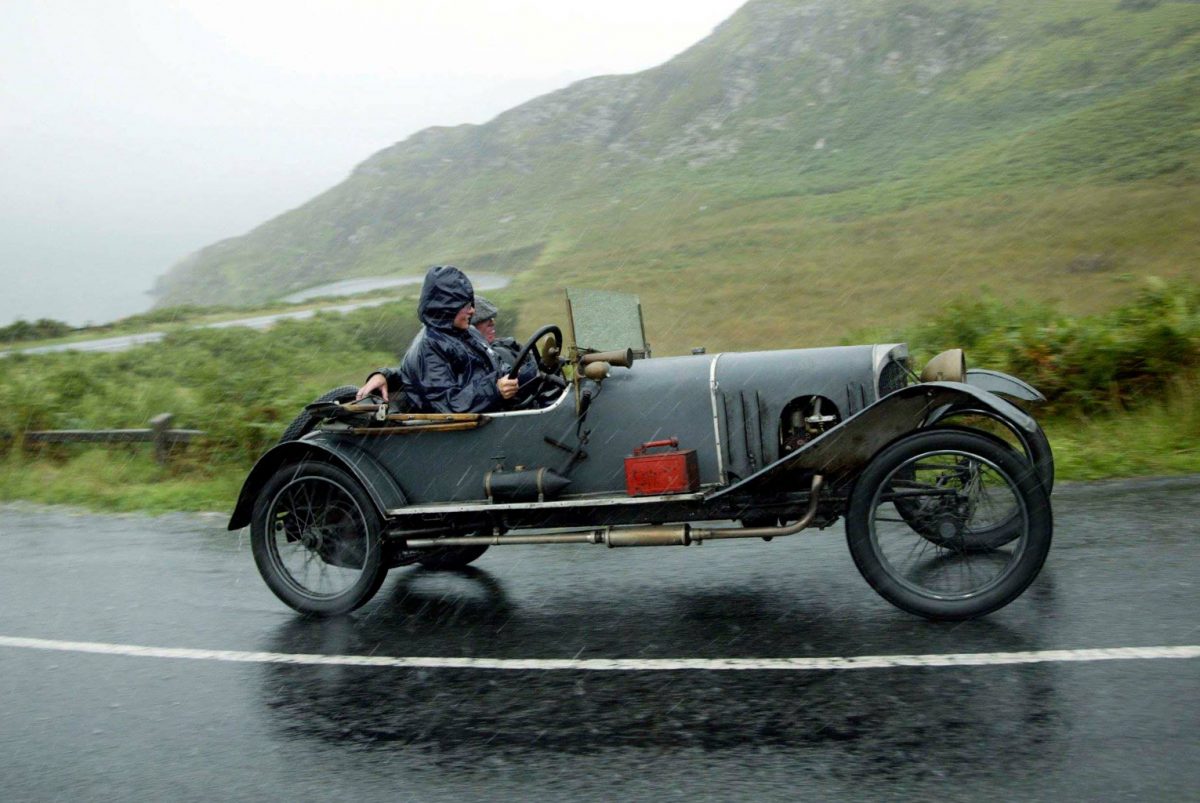 A Frazer Nash vintage sport car braving the pouting rain to say they passed over Knockala coast road a couple of years back. Photo Brian McDaid.

People in cars, on foot and even a schoolmate of my own Harry Boyce who was out enjoying a cycle over the hill.

Knockalla is just one of the great roads around the coast of Donegal that people come for near and far to enjoy. A great place to chill but not a great place to deliver a fridge.