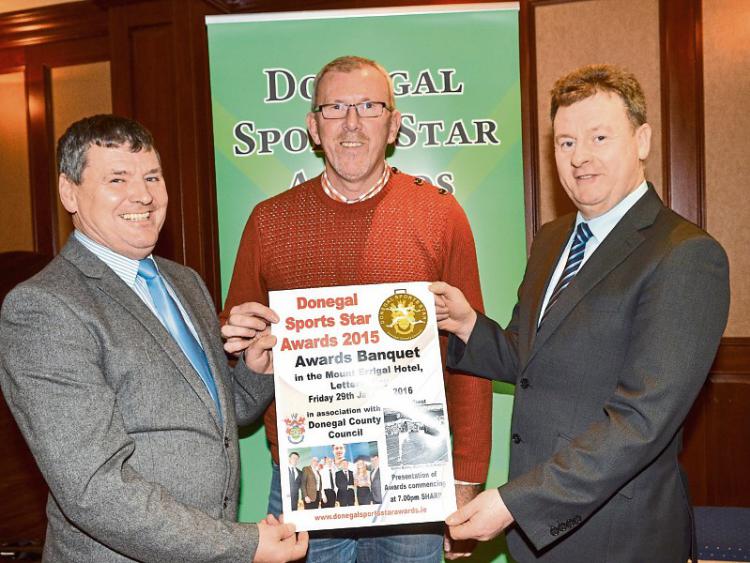 2018 Donegal Sports Star Awards to be launched next week

The launch for the 2018 Donegal Sports Star Awards will take place in the Mount Errigal Hotel on Monday the 7th of January at 6pm.

Details will be announced for the awards function which takes place on Friday 25th of January in the Mount Errigal Hotel. At the launch the Donegal Sports Star Awards winners from 1978 will be honoured with presentations to mark the 40th anniversary.

Information on tickets and other details for the function will be released at the launch and the special guest will also be announced.

The launch is going to be a nostalgic evening for the 1978 winners. It was the third annual awards and was held in the Milford Inn on the 24th of November 1978. The special guest on that occasion was the late Noel Carroll who was an Irish Olympic athlete. Lifford man Liam Doherty was named the first overall Donegal Sports Star Award winner. In the previous two years the committee had only selected category winners. Doherty took the top honour after a string of athletic hurdling successes with the Lifford Athletic Club

Patrick Grant was the boxing award winner in 1978. He won a number of Ulster titles in a distinguished career representing Buncrana B.C while Margaret Curran, Kildrum took the camogie award for the second year in a row.

The 1978 badminton award winner was Audrey McBeth from Raphoe. Clay Pigeon Shooting has been an integral part of the Donegal Sports Star Awards since it was founded in 1976. The winner of the 1978 award was John Campbell from Ballybofey.

It was the start of a three-in-a-row for John who also won the title in 1979 and 1980. He took the Clay Pigeon category a total of seven times.

40 years ago the GAA winner at the Donegal Sports Star Awards was Finnian Ward. The Glencolmcille man played for the Donegal GAA County senior team from 1973-82.

In 1978 he was a member of the all-conquering Naomh Columba side that won both the Donegal Senior Football League and Championship titles. In that same year he also won an All-Ireland Gaeltacht medal with the Glen. The Club also won the County U21 title in 1978. The winner of the golf category in 1978 was Mona O’Donnell

Falcarragh women Noirin Kelly and Margaret McFadden won an All-Ireland U15 Doubles Handball at the Tailteann Games which were staged at Croke Park in 1978. And it was that success that Noirin and Margaret honoured with the handball award that year.

The hockey category winner in 1978 was David Craig from Raphoe. David was a versatile sportsman as the following year he was named the winner of the Donegal Sports Star Tennis Award. Now living in Derry, David is still playing Masters Tennis and has represented Ireland.

The winner of the hurling category in 1978 was the late Seamus Grimes from Ballyshannon. The 1978 Donegal Sports Star Award Motorsport winner was John Joe Boyce from Ramelton. As well as taking part in the Donegal International Rally, John Joe also done events in Ulster and as far as Cork and in Scotland. For most of those rallies Seamus McGettigan was his navigator while the late Sterritt Graham also sat on calling the notes for a couple of events.

John Mannion was the rugby award winner in 1978. A second row forward John was a mainstay of the Inishowen Rugby Club side for a number of years

The soccer award in 1978 went to Rathmullan native Jim Sheridan. Jim was captain of Finn Harps at the time during an era when the team went very close to winning the league title.  Portsalon woman Linda Friel was the winner of the table tennis award in 1978.

The winner of the tennis category in 1978 was John Allen. For his distinguished service to GAA, the late Tom Farren from Carndonagh was inducted into the Donegal Sports Star Awards Hall of Fame. St. Eunan’s College took the ‘Schools’ section after their U16 side won the All-Ireland soccer title that year.

The winners from 1978 have been invited to the launch along with representatives of those now deceased on next Monday evening the 7th of January in the Mount Errigal Hotel.