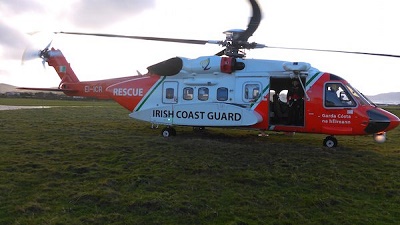 The Irish Coast Guard has rescued more than 400 people this year from operations coordinated from Malin Head, Valentia Island and Dublin.

In its annual report of 2018, the organisation said a total of 102 medical missions were flown from Ireland’s offshore islands to the mainland.

By year end the Coast Guard said their helicopters will have flown in excess of 670 missions, of which 119 were conducted on behalf of the Health Service Executive.

The Helicopter Emergency Medical Service (HEMS) was provided to the HSE/National Ambulance Service – including inter-hospital transfers. The busiest inter hospital transfer routes of the year were from the Letterkenny and Sligo to University Hospital Galway.

Coast Guard director Chris Reynolds said: “I want to particularly acknowledge the commitment and professionalism of our volunteer members.

“In addition to the three core services that they provide they are an integral part of community resilience and continually act as the eyes and ears of our RCCs in assessing and responding to any coastal emergency.”

“If you can raise the alarm and you can stay afloat then you have an outstanding chance of being rescued by our world class rescue service.

“If you see somebody in trouble or if you think they are in trouble at sea, on the water or along the coast Dial 112 and ask for the Coast Guard”.

‘It’s easier to get a Garth Brooks...

Boosters to roll out for people with...

Virus ‘circulating at too high a level’...