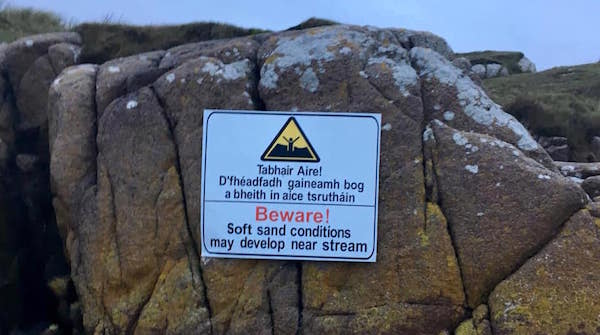 Warning signs erected after child’s near sinking miss on beach

Signs have been erected on a Co Donegal beach after a child had a terrifying ordeal when he sank in quick-sand.

The child was walking on Carrickfinn Beach with his mother last weekend when the incident happened.

The 3-year-old was playing in rock polls with his mother when he began to sink suddenly.

Despite the pools being only two to three inches deep, he sank up to his waist in just seconds.

The boy’s mother, Diane Robinson, managed to pull the toddler out and clung on to a rock and scrambled to safety.

The relived mum posted a warning to other beach-goers on Facebook.

She wrote “I had no leverage to pull him out so I had to get in beside him, and I sank to my thighs.

“Luckily I could push him up and out and use a rock to get myself out. But a child by themselves, or a family pet, might not be able.”

“I’ve walked Carrickfinn Beach for years and never experienced what I did yesterday, and I just want others to be fully aware.”

Local county councillor echoed the mother’s warning saying there have been a number of similar incidents over the years.

“There have been a number of close calls over the years and it would not bear thinking about what could have happened here.

“Diane saved her child’s life but we must ensure that people who are not familiar with the area are made aware of the dangers,” he said.

Donegal County Council has now acted on the matter and have placed warning signs in the area.

Cllr Mac Giolla Easbuig added “I would all so like to thank Donegal County Council. I would especially like to thank Better Letter Signs who made the signs and erected them and for their very quick response on request.”