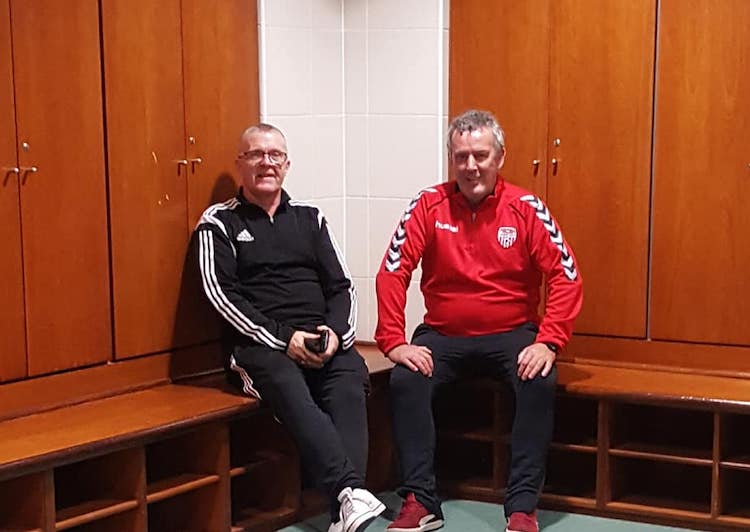 An exciting new link up between Donegal and Celtic FC will get underway on Saturday as the Hoops’ Ability Counts programme is rolled out in the county.

Donegal Down Syndrome has joined forces with the Glasgow giants.

The Celtic Foundation Chief Executive Tony Hamilton and Donna Marie Henry, the project manager, will be in Letterkenny on Saturday for the first day in Donegal.

Picture: Coaches Pat McLaughlin and Tony McNamee at Celtic Park, where they trained for the Ability Counts programme.

The project will be held from 11am-1pm at the Aura Leisure Centre and will, initially, run until March, with hopes high that term can be extended.

“If we have the participants and they’re willing to stay on, it could become permanent,” Gina Grant of Donegal Down Syndrome says.

Contact was first made around March when the Association of Donegal Celtic Supporters Clubs hosted a fundraising dinner for the Celtic Foundation, who run the Ability Counts Programme.

“The Celtic Supporters Club were very proactive with this,” Ms Grant says.

“They had the charity event last year and they have seen the benefits of the programme.

“We have two people trained up locally and they were over at Celtic for training. We will have a coach from the Ability Counts programme flying in to be with us every were.”

Tony McNamee, the manager of Ulster Senior League side Swilly Rovers who has worked for the last five years with Donegal Down Syndrome, and Pat McLaughlin, who is involved as a coach with Donegal Special Olympics, will take charge of the sessions in Letterkenny.

“We have over 40 taking part in this programme and there is great excitement among our members,” Ms Grant says.

“The sessions will be a mixture of physical education and football training.

“Celtic ran a pilot programme in Dublin in the summer and we’ve been working with Celtic for the past few months to get it up and going. Celtic obviously have a massive support in Donegal and it’s brilliant to be partnering up to host this programme.”

The initial strand of Ability Counts was developed in 2010 and launched in 2011, in conjunction with Downs Syndrome Scotland.

The programme’s website says: “Ability Counts Down’s Syndrome is predicated on a simple model of inclusivity, companionship and most importantly, fun.

“Our sessions allow participants a sense of freedom and allowing them to express their feelings in a relaxed, comfortable environment.

“Allied to this, is Celtic FC Foundation’s renowned expertise and quality of coaching. From the outset, the Foundation recruits coaching staff adept to cope with the nuances and sensitivities of our participants’ conditions.

“To better acquaint themselves with these challenges, a key priority for our coaches is to develop a personal affinity with families, facilitating a mutual trust and bond that allows for over-arching peace of mind.”