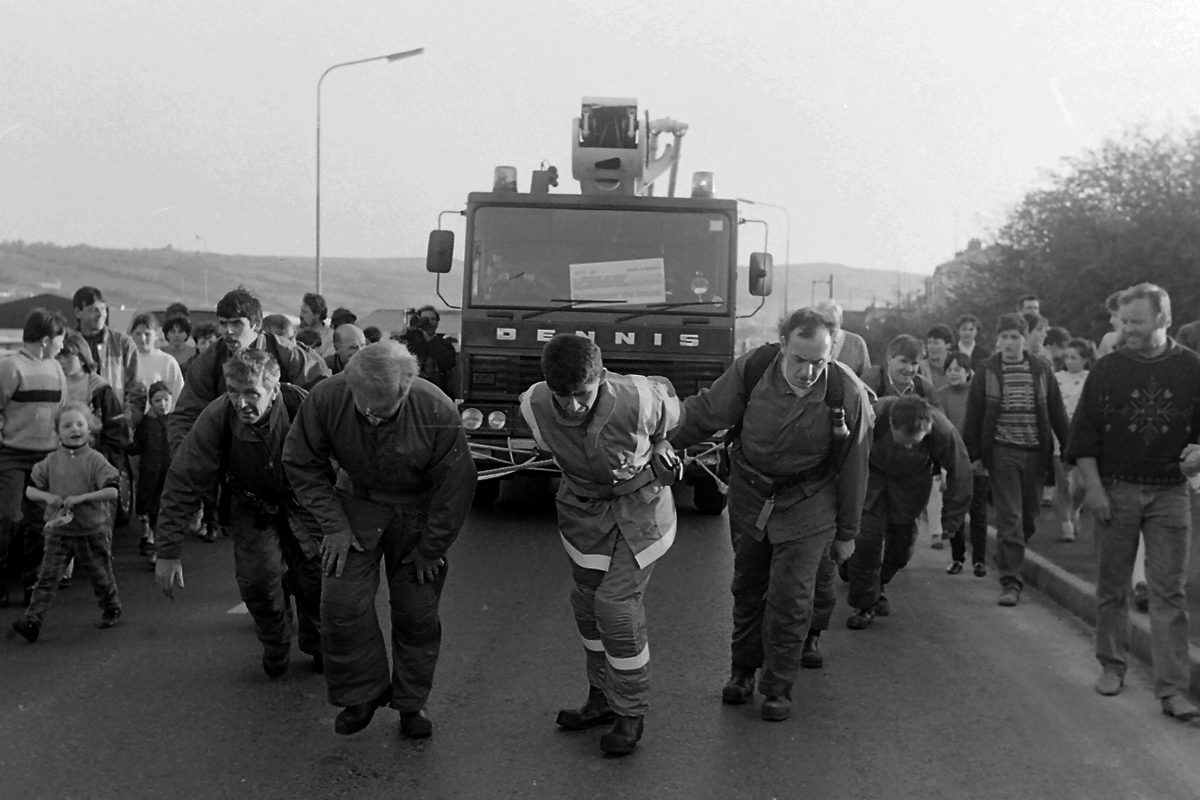 The news wasn’t good. A few days before this he was standing in the fire station in the control room beside the printer where our calls came into from central control, now he was in the hospital.

We thought it would be better to give his family space over Christmas, but it wasn’t long before all his crew members were up at his bedside.

I don’t like hospitals, but I headed up to his ward. Meeting me he extended his hand from his hospital bed to welcome me, then looked away at the television on the wall in front of him and me looking out the window up the fields towards Windyhall, both of us crying but trying to hide it from each other.

“Right,” he said. “Brian, what happened to the Snorkel?”

‘The Snorkel’ I wondered.

“Is she!” I replied, suggesting I knew nothing about what he was talking about.

“Don’t be giving me that old tale now sir.”

‘The Snorkel’ was our flagship fire engine at the Donegal Fire Service. It was a Dennis Fire Engine with a hoist or platform. Purchased new in 1982 to service any part of Donegal that needed it, but was mainly purchased to reach the top of the new Hospital in Letterkenny in the event of a fire.

When the new Fire Engine first arrived into Letterkenny Fire Station, even the floor in the old station had to be lowered by two feet to get the engine to fit in, the wing mirrors also had to be folded in the clearance was so tight in the bay.

On the road, the Snorkel had a beautiful stance, Its V8 diesel Perkins engine had a glorious sound to it and with the blue lights flashing and two tones blowing as it made its way to a fire call and then set up in position on its four jacks with the boom extended and a powerful jet of water hitting a fire from a height. It was a sight to behold.

“You know, Brian,” Eamon said, trying to move things along.

“The last time the Snorkel was on a rope, was when we pulled it across the railway road to raise money for RTE’s People in Need. Do you remember that?!”

What my fellow fireman and driver was questioning me about from his hospital bed was a call that we had responded to since he went into the hospital.

It seems the story,  in many different versions, had made it to his bedside before me.

A New Year’s Eve call to a fire where water supply wasn’t good. A crew fighting the blaze called for more water so the two men left in the station decided to respond in the Snorkel.  “China” got the front door opened as I got the big V8 fired up. First gear in this yoke was dog-leg back to the left and when I went to select it the big heavy gear stick bounced out of my hand. 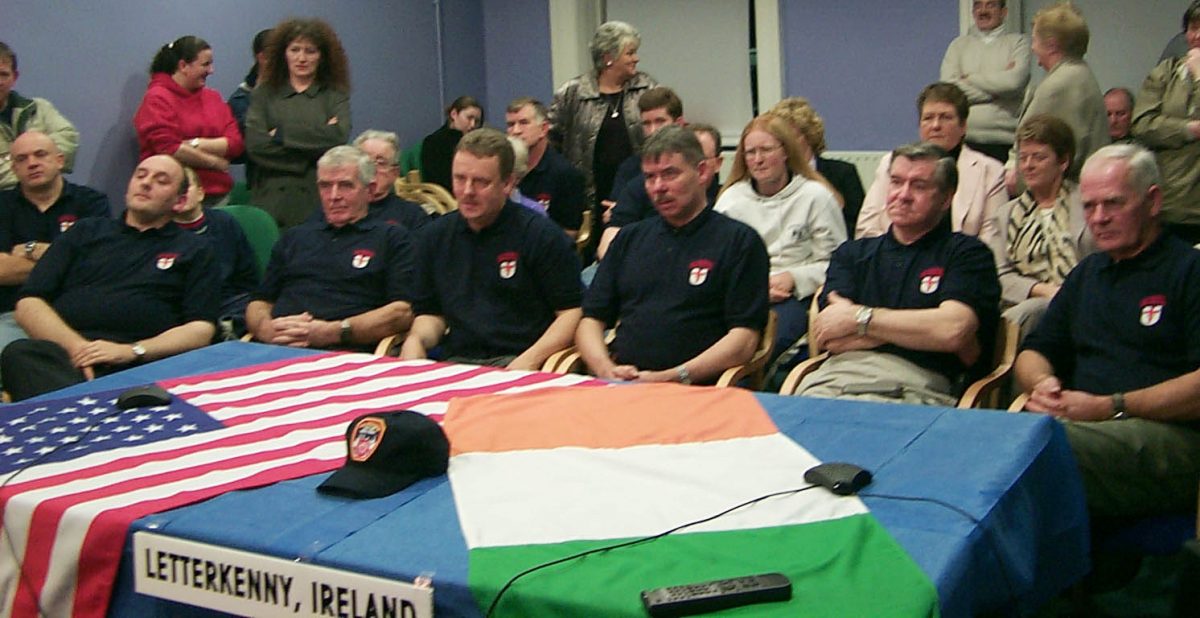 Members of the Letterkenny Fire Brigade who were thanked in a live Video Link up in New York by the Squad 41 firestation for the fundraising.

The more this Fire engine was beautiful and sounded lovely when heading to a call. It was very hard to drive and its gearbox was particularly temperamental especially when the gearbox oil was cold.

Sitting with the blue lights flashing in the bay of the station, the Snorkel, much as I tried, wouldn’t go into gear. It was as if it knew its normal driver wasn’t there.

As a last resort, I turned the engine off and put the gearbox into second gear and fired up the engine again then all of a sudden we were moving out the station door and on the way to the call down the de Valera Road.

We were up into third as we went into the Oatfield roundabout, I went to change down into 2nd, but ended up in neutral then I just managed to select third again.

I thought we had enough momentum to take us through the roundabout but we were quickly losing speed. Riding the clutch out of the roundabout and still in third gear, the seventeen and a half tonne fire engine very slowly started to gather speed again helped on by me and ‘China’ rocking forward on our seats.

When we got as far as the station roundabout China roared: “keep her lit.”

We were now safely through that roundabout and with the Port Bridge roundabout ahead, we just stayed in third gear and made it safely around and we were soon at the fire.

When we arrived the crew fighting the fire had it well under control and our water supply wasn’t needed.

By now the Snorkel and its clutch were getting worse and as we headed for home nursing a burning clutch. She finally gave up on the way back up the De Valera Road – just 20-yards from the fire station door.

We had to wait for the returning crew to come along and pull our stranded fire engine back to base.

For a man who was so weak, I didn’t notice how much he had perked up at my expense as Eamon started explained to me what I might have burnt out.

Carrie his wife said to me in the hallway after: “I don’t care what you burnt out on the Snorkel, the clutch, the gearbox or whatever it was going to a call.

“But your driving was music to Eamon ’s ears and it took his mind off other things.”

The Late Eamon Harvey at the wheel of the Snorkel, that I managed to burn the clutch out of. Also pictured council truck and a rally car and relaxing at home.

The second visit to the hospital went a bit different. I washed out a fancy olive oil bottle which we had at the house and scraped the stickers off it.

I lifted water from a well on a cold winters evening and headed into the hospital to visit Eamon. I was going to just leave the water at the nurse’s station in the ward but, the duty nurse said there was no one in with him and if I didn’t stay to long I could go down to see him.

He was now in the old original part of Letterkenny General Hospital. Eamon was in bed watching the rugby, he looked at me, “What’s that you have with you?”

Eamon, who was a none smoker and teetotaller, just smiled at me and said nothing.

“Nah, it’s just some water from a well.”

I poured out a glass for him, he tasted it and liked it, then just with that Eamon’s brother arrived.

“Taste that sir,” Eamon said to his brother Pat.

“Where did you get that? Not in here anyway,” Eamon joked.

It might as well have been Poteen the way Eamon protected the bottle of water from the well from his brother who wanted more.

I went to get up to let his brother sit down and Pat told me to sit where I was. “I’ll be back in a while,” he said.

The rugby was on the telly, it was a big match so we just sat and watched it. The thought crossed my mind that evening that I was here before.

This was the same ward that my mother was in when she came back from St. Vincent’s in Dublin. I was too young to visit her when she was a patient in here but, once we were brought down as children to play in the snow outside her window so she could see us but she didn’t want us to see her.

That was just after Christmas in 1969 and days after that she passed away on the 2nd of January 1970.

Suddenly Eamon was calling to me, here was me that was supposed to be in visiting and I had fallen asleep on the chair at the side of his bed in the heat on that winters evening.

Clambering  to my feet, thinking he wanted the nurse or something, and trying to remain calm I asked

“Look out the window,” he whispered.

“Quick, look out the window,” he urged.

“What am I looking for, Eamon?”

“Listen,” he said, as he pointed with his finger. “Is that my lorry on the way up past?”

At first, I could see nothing and then out of the hospital roundabout appeared his council lorry. A yellow Hino laden down with salt and grit.

“Aye, you’re spot on sir, that’s her,” I replied, opening the window to let the rattle of Eamon’s lorry fill the hospital ward.

Eamon stretched back on the bed and placed his hand behind his head and smiled. “Sure didn’t I drive her since she was brand new.” Then there was a long silence as I closed the ward window. It was hard to know what to say next.

Then Eamon quipped: “There’s nothing wrong with the clutch on that one is there sir?!”  We both laughed, which hid what we were really thinking.

Eamon Harvey worked as a driver with the Donegal County Council, he was also one of the driver/firefighters with the Letterkenny Fire Service and drove ‘the Snorkel’ for over twenty years to many a big fire call. The same fire engine that I managed to burn the clutch out of on my first call out.

Back then this was this time of year and Eamon was to pass away a few weeks later that year on the 23rd of January 2004. 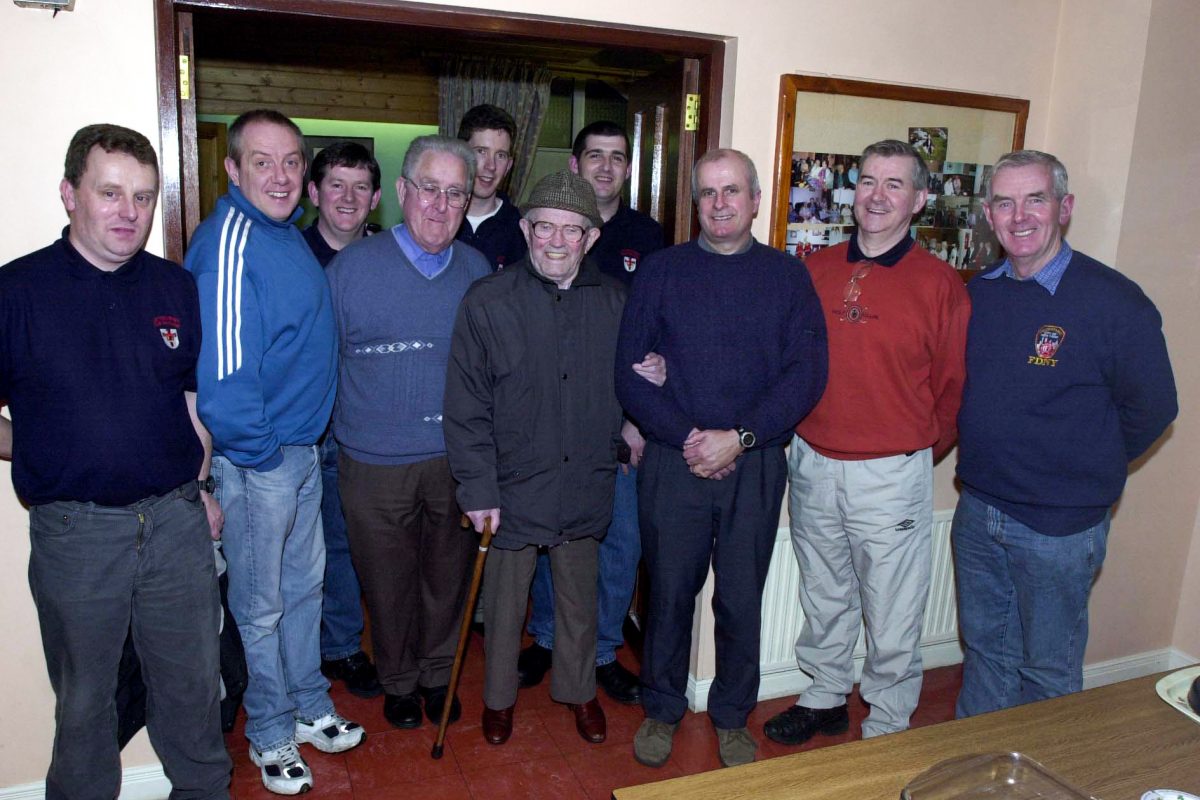 They say if you remember the people in your life you will keep their memory with you. May he rest in peace.

And finally… keeping an eye out for the first of the new 2019 registrations, I was drawn to this chance photograph in Letterkenny on the second day of the new year. 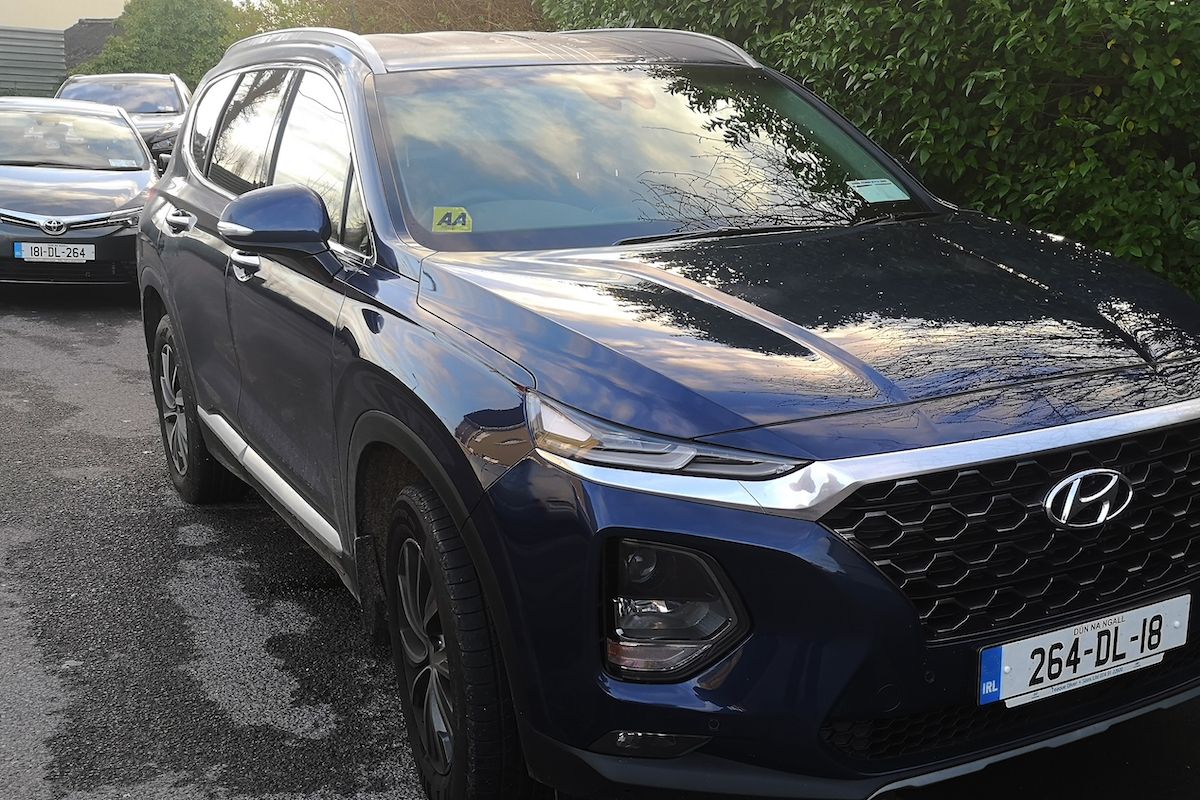 Keeping an eye out for the first of the new 2019 registration, I was drawn to this chance photograph in Letterkenny on the second day of the new year. It wasn’t the first 2019 numbers of the new year, It was two Donegal number from 2018. 181 DL 264 and 264 DL 18 on two different car, but the same number only one was back-to front and the other was our normal. The chances of the same number parked together was an odd one the number in reverse was more than likely and garage plate. Photo Brian McDaid.

These were on two different cars, but the same number only one was back-to-front and the other was our normal.

The chances of the same number parked together was an odd one. The number in reverse was more than likely a garage or trade plate.