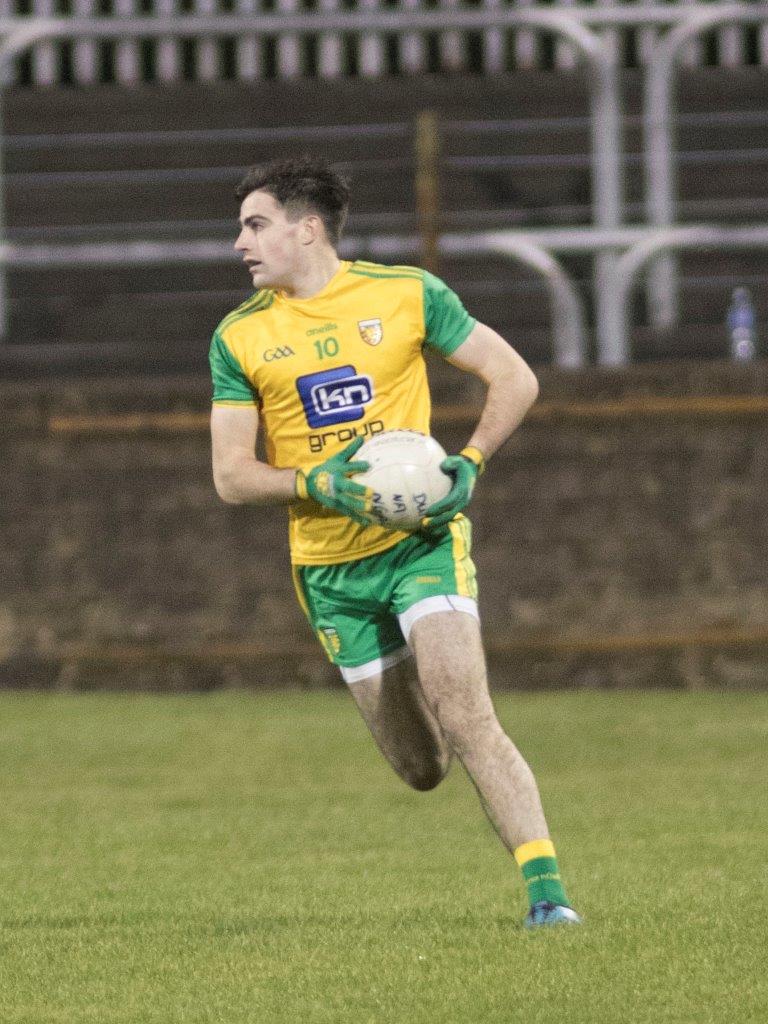 Donegal overcome Down in Dr McKenna Cup in Newry

DONEGAL HAD 10 points to spare over Down in the second Dr McKenna Cup win of there season – at Pairc Esler in Newry this afternoon.

Martin McElhinney scored four points from midfield and Coalan McGonagle netted the only goal as Donegal performed stronger in particular at the end of each half.

Declan Bonner’s team now can seal a semi-final place when Cavan come to MacCumhaill Park on Wednesday. A win or a draw will see  them top Section A, with the Breffni County having recorded their second win of the competition this afternoon as well – beating Queen’s 0-17 to 0-3.

Even at that, there’s a spot for the best runner-up from the there groups to make the last four. Permutations to follow!

Today, Donegal were firmly in control for most of the contest and although Bonner has been pretty vehement in the assessment of the experimental rules being trialled in the competition, his side were thankful of them in the first half.

Substitute Conor McGrady shot past Mark Anthony McGiney on 19 minutes for what appeared to be a Down goal, with Ciaran Harney and Conor Francis involved in the move’s build-up.

However, there were actually five successive handpasses before the final shot meaning that Donegal’s 0-4 to 0-2 lead at the time remained intact. It seems as though the experimental rule – which only allow three-in-a-row – isn’t considering a footballer’s instinct.

Niall O’Donnell had put Donegal in front 40 seconds in only for Conor Harney to level for Down. In a decent and open start to affairs, the away team went 0-3 to 0-1 ahead through Michael Langan and Jamie Brennan scores.

McGinley in the Donegal goal fluffed a kick-out to Down’s Pat Havern to pull one point back for Donegal and the goalkeeper went long in the instances that followed. Ryan Johnston for Down before a McElhinney point at the other end gave Donegal the a 0-4 to 0-3 lead either side of Down’s disallowed goal.

For their part, Donegal were pulled twice in the first half by referee Barry Cassidy for over-passing with the hand.

The immediate 10 minutes before half-time was when Donegal made their hay, turning a one-point advantage into a 0-9 to 0-3 lead by the time the kettles were boiled.

Playing with movement and verve, five points on the spin gave the scoreboard a healthier reflection. Those scores came from McGonagle’s 45, a decent Martin O’Reilly points and then Brennan, Langan and McElhinney all added their second of the day.

In that first half, Donegal had also been guilty of dropping three balls into the hands of Down goalkeeper Johnny Parr, as well as sending six wide. Down had three short and four off the mark.

Paddy Tally’s Down were also wondering had their lucky stars been dimmed in the shadow of the Mourne mountains in the second half, when, 11 minutes in, Havern delightfully manufactured some space for himself before going through on McGinley – the shot was low and hard and rattled off the base of the post and Donegal gobbled up the rebound.

It was 0-11 to 0-4 for Donegal at that stage, with Ciaran Thompson and McElhinney their early second half point-scorers and Paul Devlin scoring in-between for the hosts.

Down did threaten as Donegal looked far from water-tight, with McGrady getting a couple of scores after his first half disallowed goal, while Paul Devlin came off the bench to put over three frees.

Donegal, though, just as they did in the first, finished the second half impressively. In the final quarter, they outscored the locals 1-5 to 0-4, with Peadar Mogan joining the attack to score.

The goal came from a pass from Oisin Gallen, who had just been introduced, in the direction of fellow substitute Lorcan Connor. However the pass overran and as goalkeeper Parr charged from his line it was McGonagle who was alive to the situation to punch into the empty net with just eight minutes to go.

Donegal finished it off with a point apiece from Gallen and Hugh McFadden.