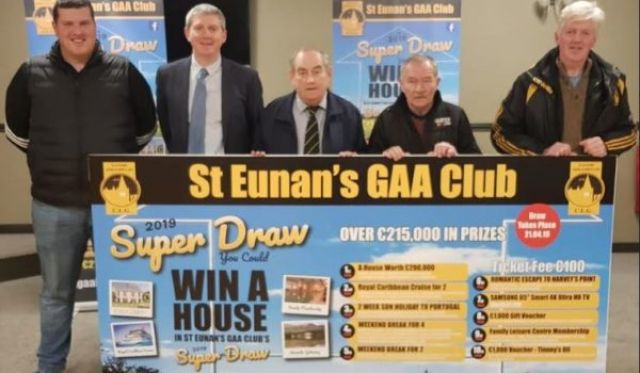 FEARS over Brexit are driving sales of GAA draw tickets to ex-pats – with the prize to win a house here in Donegal.

St Eunan’s GAA club in Letterkenny was the first sports club to re-introduce a ‘Win A House’ draw after the recession after holding six previous draws in the Noughties.

The last draw was launched in the autumn of 2016 with the winner a London-based Sligo man Justin Brett who, ironically, was seeking to move back home before the Brexit vote.

Now officials at the club say there has been a surge in the number of tickets being bought online in Britain and fears around Brexit are being blamed.

This year’s super draw will take place on April 21 with the first prize a €200,000 3-bedroom home in Letterkenny with people in the UK snapping up tickets the club’s website www.gaahousedraw.com.

Runners-up prizes in the €100-a-ticket draw include a Med cruise and a number of other holidays. Celebrities including singer Daniel O’Donnell have backed the draw.

He said: “This is an incredible chance for someone to win a dream home in our fabulous county – and back a club which does so much for the community in Letterkenny. Everybody wins.”

St Eunan’s Club Draw Co-ordinator Ciaran Haran said: “Back in 2017 Justin Brett was the exception to the rule. He bought three tickets on our website one night when he was dreaming of being home and closer to his family in County Sligo.

“We did sell a few tickets to people in Britain but we’ve noticed a huge surge in sales there this time around.

“I’ve spoken to a few people I know over there (in Britain) and their decision to buy a ticket has been driven by a desire to come home to Ireland because of Brexit.

“There is a great fear over there about what will happen in just a few weeks’ time and I suppose a lot of Irish people who have always dreamed of coming home but never got around to it have had their minds focused on doing that because of Brexit.

“We’d be looking at the number of ticket sales online to people currently resident in Scotland, England or Wales as having increased five-fold on a couple of years ago.”

Mr Haran says the Letterkenny GAA club – which has 37 teams in football, ladies football, hurling and camogie – will invest monies from the draw in further developing their grounds at O’Donnell Park which is also home to the Donegal men’s senior hurling team and the Donegal Ladies senior football team.

The last draw helped to pay for a new floodlight all-weather pitch and hurling wall at the Co Donegal club.

There has been a huge interest in the €100 tickets from other parts of Ireland too, says Haran.

“That would have happened the last time with good GAA people throughout the 32 counties taking a ticket to support what we are doing,” he said.

“We also had good support in the United States from people wanting a house in a county voted the Coolest Place on the Planet.

“In practical terms there is a huge attraction to live in Letterkenny now with a number of major companies expanding here, particularly in the financial services sector.

“And Letterkenny IT will get university status later this year with an expansion in the number of degree-level courses on offer.”

Ciaran added: “We are confident that this draw will do very well and every cent is being invested back into the club which is at the heart of the community in Letterkenny.”