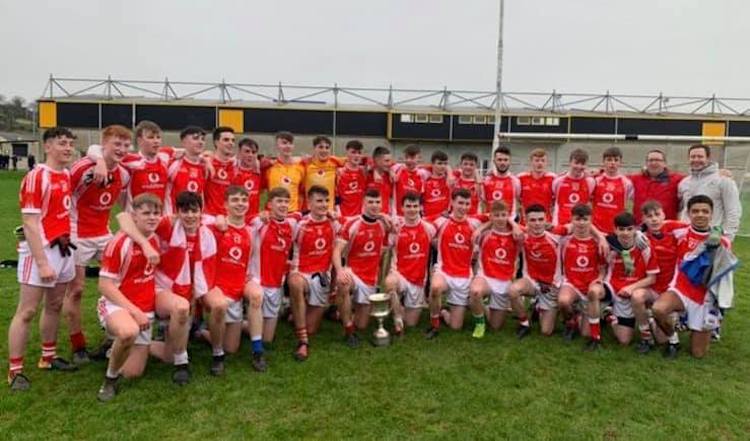 Abbey VS won the Donegal Senior Schools Final after a dramatic late goal from Cian Hegarty.

By Stuart Connolly at O’Donnell Park

Losing 2-2 to 1-3 at the break, they bounced back and almost lost it near the end after a spirited fightback from Loreto but Hegarty’s goal snatched the win in added time with the game level.

After a testing battle to open the game, Loreto got an early goal courtesy of Steven McDaid. Abbey VS replied with two frees from Crawford and Hegarty but Loreto soon had their three-point lead back with Johnny McGroddy and Rory O’Donnell converting.

Michael Statham fired his side level shy of the break before Ian Campbell gave his side the lead for the first time.

It was Loreto, Milford who went into the interval with the lead after Kyle McFadden netted his side’s second goal with the whistle imminent.

A lightning quick start to the second half saw the sides go toe to toe, as they matched each other in a highly entertaining competitive game.

After a hectic 10 minutes the score was level with both teams sitting on 2-5.

Cathal Feeney fired his side into the lead from a tight angle after Alex McCalmont was denied an instant impact but the sub did further the lead with a point less than a minute later.

Dan Gallagher put away his side’s seventh point of the morning to stretch the lead to 5 points but during a dry spell for Abbey, that lead was squandered.

Johnny McGroddy converted four frees to take his tally to 7 points for the day, with Bobby McGettigan putting over after the first of McGroddy’s kicks.

Abbey did have Enda O’Hagan to thank for the score staying level, stopping efforts on goal from Aaron Reid and Conor Black.

After an effort from Shaun Kennedy rebounded off the post, it fell to Hegarty in the middle of a scramble and he powered home a goal to send his team and school spectators into euphoria.