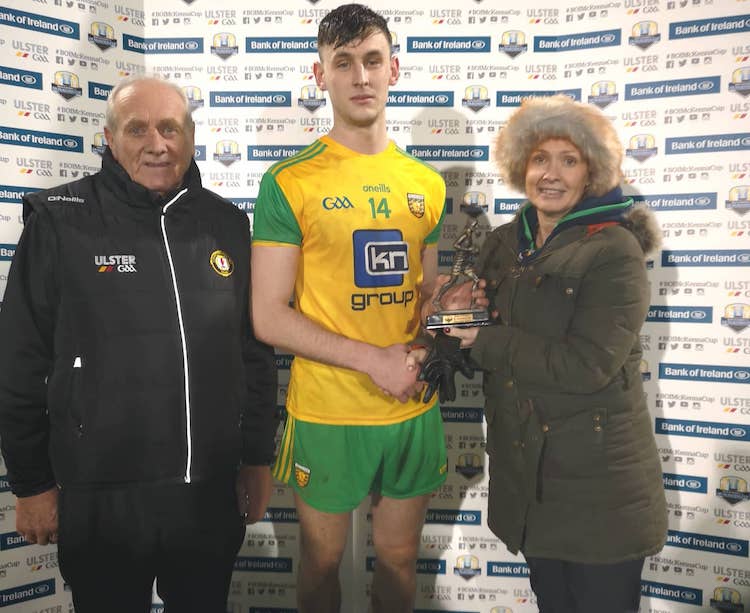 On a night when Martin McElhinney made his 100th Donegal appearance, it was another St Michael’s man – Michael Langan – who stole the show with nine points as Donegal made it three wins from three in 2019.

Langan was on fire as holders Donegal overcame 14-man Cavan in Ballybofey to book a Dr McKenna Cup semi-final slot and Declan Bonner’s team will meet Armagh in Omagh on Sunday.

Langan hit six points in the first half and added another three in the second as Donegal sealed an eight-point in front of 1,196 in Ballybofey.

Cavan defender David Phillips was sent off after just five minutes, seeing red for an off-the-ball hit on Jamie Brennan, who scored the Donegal goal 12 minute from the end.

Brennan cut in from the left and, just when the Bundoran man looked to have lost possession, he managed to riffle past Cavan ‘keeper Raymond Galligan.

Sub Kevin Tierney fisted in a late Cavan goal, but Donegal had the spadework done by that stage.

All-Star Ryan McHugh was making his first competitive appearance since August. The Kilcar man was side-lined by medics after sustaining a concussion injury while playing for his club, Kilcar, in a challenge game against St Vincent’s.

The All-Star missed Kilcar’s Donegal SFC campaign, but was in for the first time since the ‘Super 8’ defeat to Tyrone here five months ago.

McElhinney made the landmark 100th appearance in the green and gold having been Man of the Match in Sunday’s win over Down at Newry, but Donegal were without Eoin McHugh, who sustained a hamstring injury at the weekend.

McElhinney kicked the opening point of the second half, slamming over after taking a pass inside from Caolan McGonagle, to put Donegal five to the good.

Shaun Patton prevented Cavan from storming right back into the game when he thwarted Ciaran Brady at point-blank range.

A pair of ten-point wins over Queen’s and Down set Donegal up neatly as the Tir Chonaill men knew that avoiding defeat would be enough to seal top spot – and advancement into Sunday’s semi-finals.

Donegal had an early scare when Caolan Ward’s co-ordinates were off and James Smith invited a shot from Conor Madden, who was unable to trouble Shaun Patton, the Donegal goalkeeper, with a tame attempt. 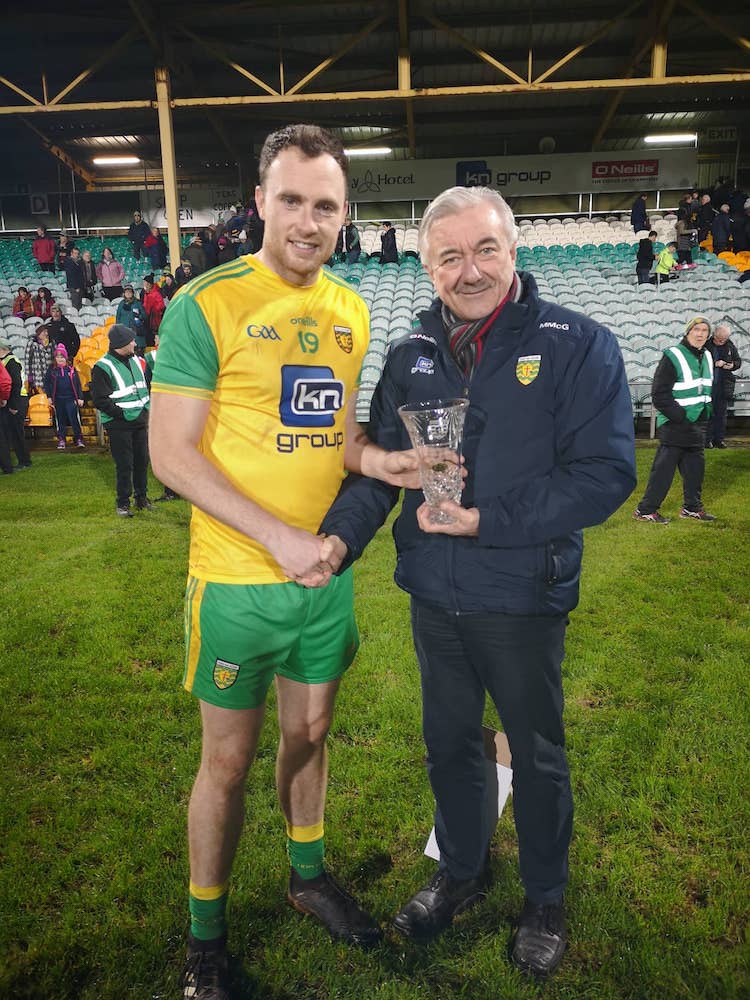 Niall O’Donnell, from an acute angle on the left-hand side and Langan, after just 90 seconds, had posted early points to get Donegal off and running.

Cavan were level as goalkeeper Raymond Galligan came up to convert a free, in between points from Pierce Smith and Conor Madden.

Langan arched over four wonderful scores with Niall O’Donnell also on the mark as Donegal moved in command to lead 0-10 to 0-6 at the break.

During those moments of Donegal dominance, Galligan produced a fine save to keep out a stinging effort by Brendan McCole, the Donegal full-back who was teed up by at close-range by Brennan.

Donegal pulled clear and sub Oisin Gallen came in to kick two points in his first senior appearance for the county on his home turf.