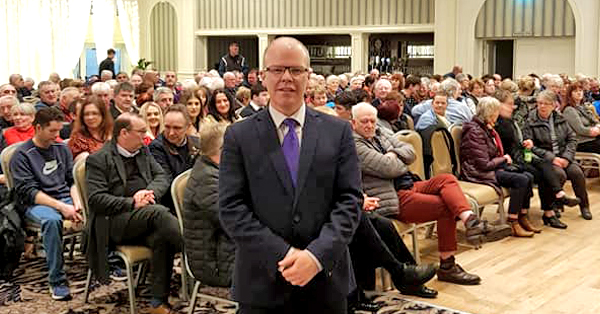 The Meath TD hosted a public meeting in the Clanree Hotel on the first stop of his tour promoting an ‘All Ireland Movement’.

The new political party, which has not yet been formally named, has been described as “left economically, republican and pro-life”. The party is targetting people across Ireland who are unhappy with current politics.

Mr Tóibín said he will start the process of selecting candidates for election by the end of January and aims to set up 100 Cumann across Ireland in the next three months.

The Deputy added that he hopes to run candidates for local elections in Donegal, in light of the voting behaviour of people in the constituency against the legalisation of abortion.

The new party will set out to ‘break the uniformity of the political establishment’, according to Tóibín. He has criticised ‘group think’ politics and blamed the process for Ireland’s economic crash.

In a statement on January 1st, Tóibín said: “Politics is not a social club. Political activism is a deeply important responsibility. Being a passenger of a political vehicle going the wrong way contributes to the problem. In the opening days of 2019 citizens need to take stock as to where they are at and where their party is going. Men and women need to seek out the political party that is most closely aligned to their values and world view.”

Tuesday’s meeting saw an estimated 100 people signing up to the movement, which is expected to develop from a grassroots base.

Mr Tóibín will continue his tour to Co. Tyrone this Wednesday.