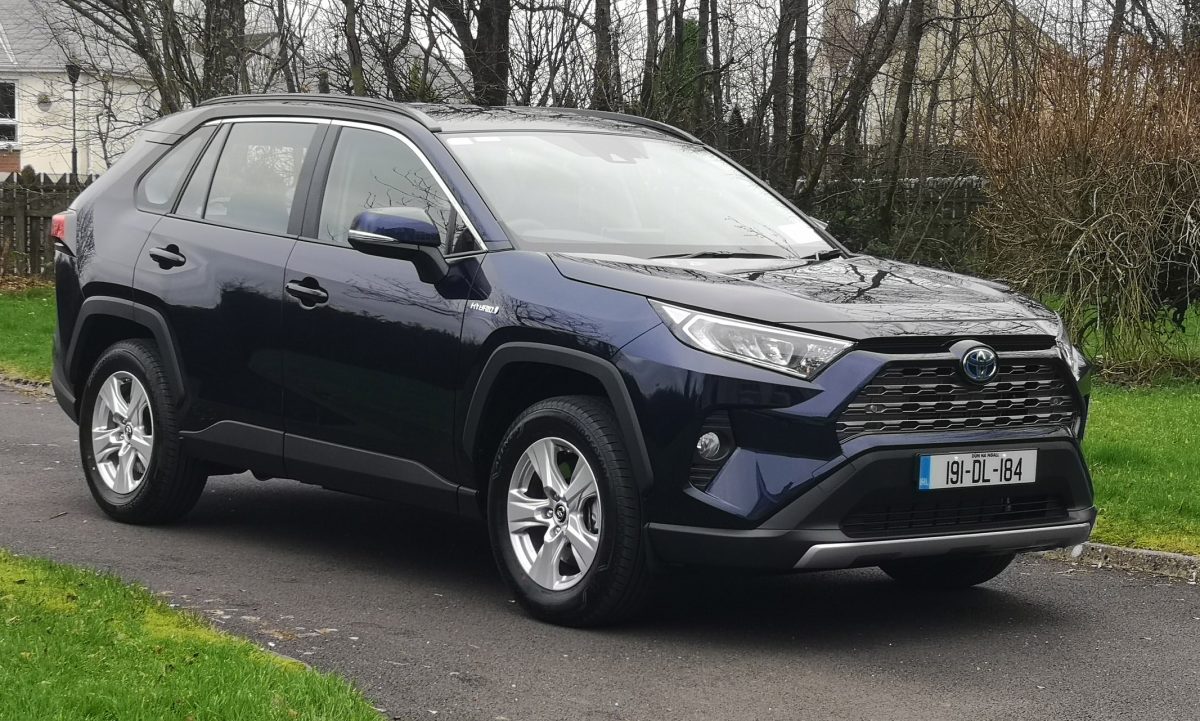 This week Donegal Daily’s motoring columnist Brian McDaid takes us on a trip in the latest Toyota RAV Hybrid as he talks about ‘the quiet revolution’.

It’s another new year and with it comes new plans or old plans done in a new way. New runners, hats and gloves and “don’t knock me down” high viz jackets are out on the circuits on the first days of the new year in an effort to burn off the energy stocks that were collected over the festive season.

For us, we took things a bit easier and rather than burn energy our aim was to save as much energy as possible as we sampled the latest offering in a hybrid form from Toyota with the all-new RAV.

My granny got the train into Letterkenny when she was going shopping as a child, She wasn’t rich, she was poor, like most people in them days.

She was able to go on the train because her mother worked for the railway. She was the cleaner at Manorcunningham Railway Station. 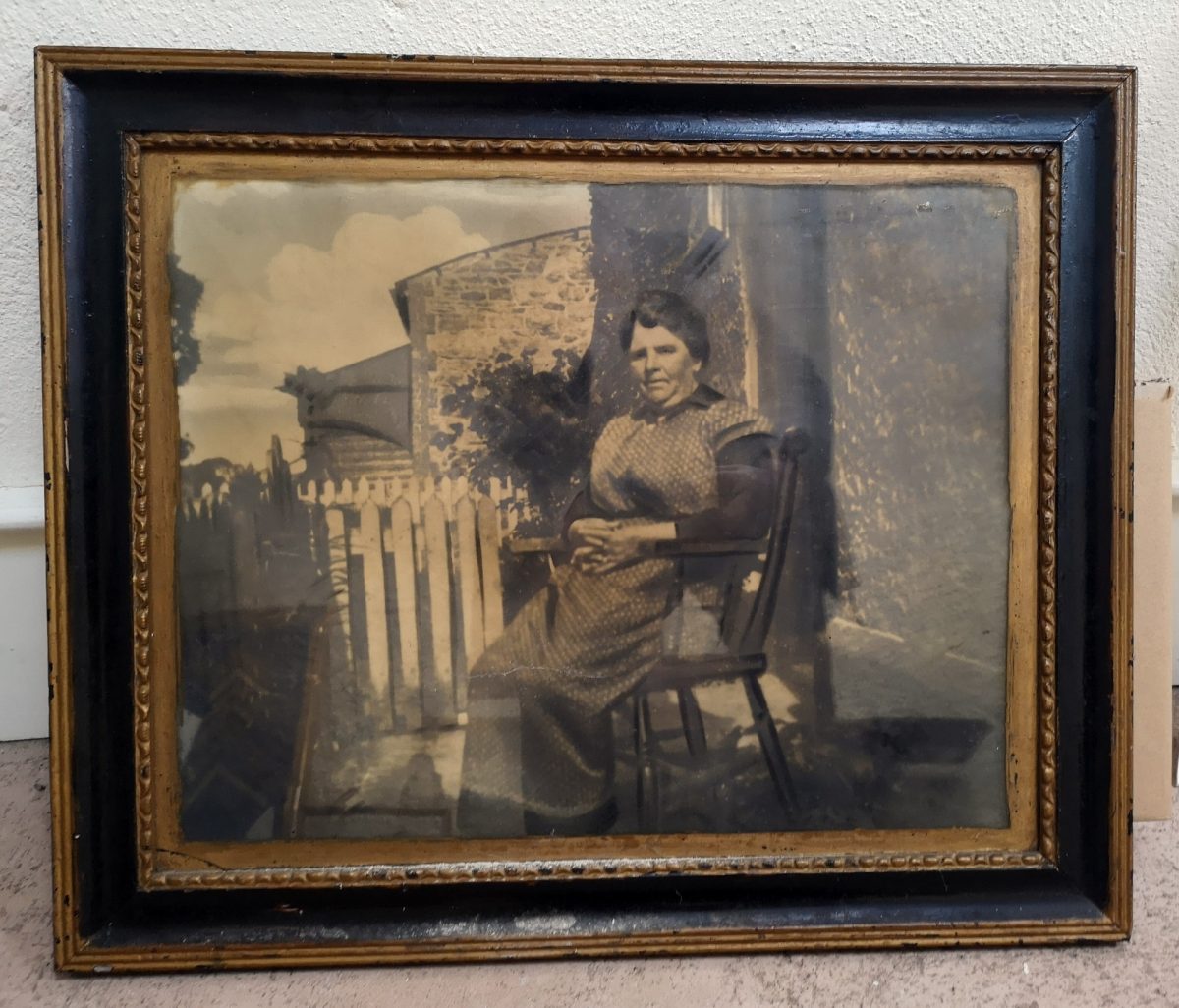 Hannah O’ Donnell my great granny who work for Lough Swilly Railway Company pictured at Manorcunningham Station House in the 1920’s where she worked as a cleaner. In the background the beautiful picket fences and goods sheds of the which made bustling station when the railway was in it element in Donegal. Photo courtesy of Paddy McDaid.

Both of them went into Letterkenny in style on the train. They shopped in Bensons, which is now called Ernest Speer’s. Bensons would let them take a rig of clothes home with them to try on before they bought them.

What had this to do with the new Toyota RAV hybrid. 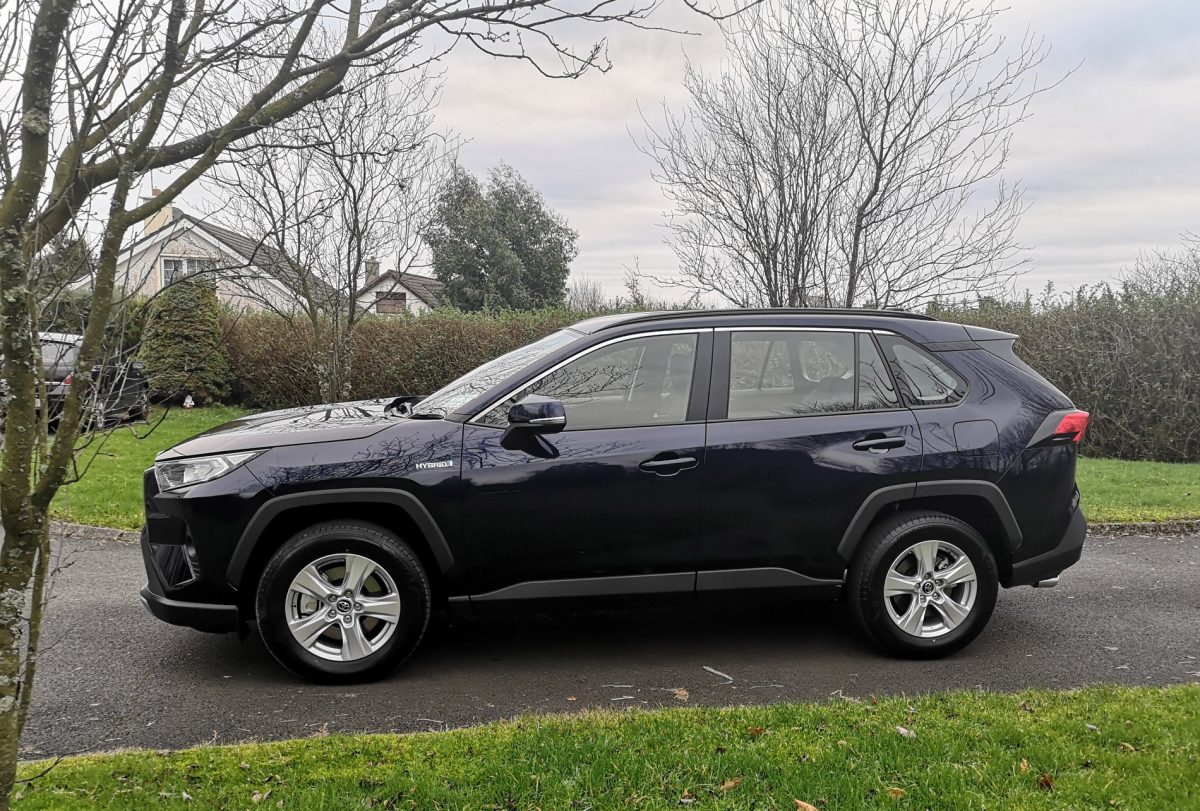 The All new Toyota Rav Hybrid which we drove this week. Courtesy of Kelly’s Toyota. Photo Brian McDaid

Nothing really, but here’s the thing. Sitting here in the heavy traffic on the Derry Road on the inbound lane into Letterkenny at the Port Bridge or Polestar roundabout as its called now.

I can see the remains of the railway bridge that once carried the train out over they Derry Road and over the River Swilly and lines up perfectly to where I’m sitting today on the road in 2019.

Kind of time travel “Letterkenny Style” thinking about all the modes of transport that crossed this bridge and not forgetting all the bar pilots that safely guided boats up the winding River Swilly into the Port that made the town of Letterkenny.

The train took an engine driver, a fireman and a guard on board and all who manned the gates and crossings on its daily journey to make transport work.

We went from coal to steam then to diesel buses and then on to privately own petrol cars, which for the most part moved to diesel, which now are moving back to petrol or in the case of what we are driving today ‘Petrol and Electric’ combined in the form of the Toyota Hybrid RAV. 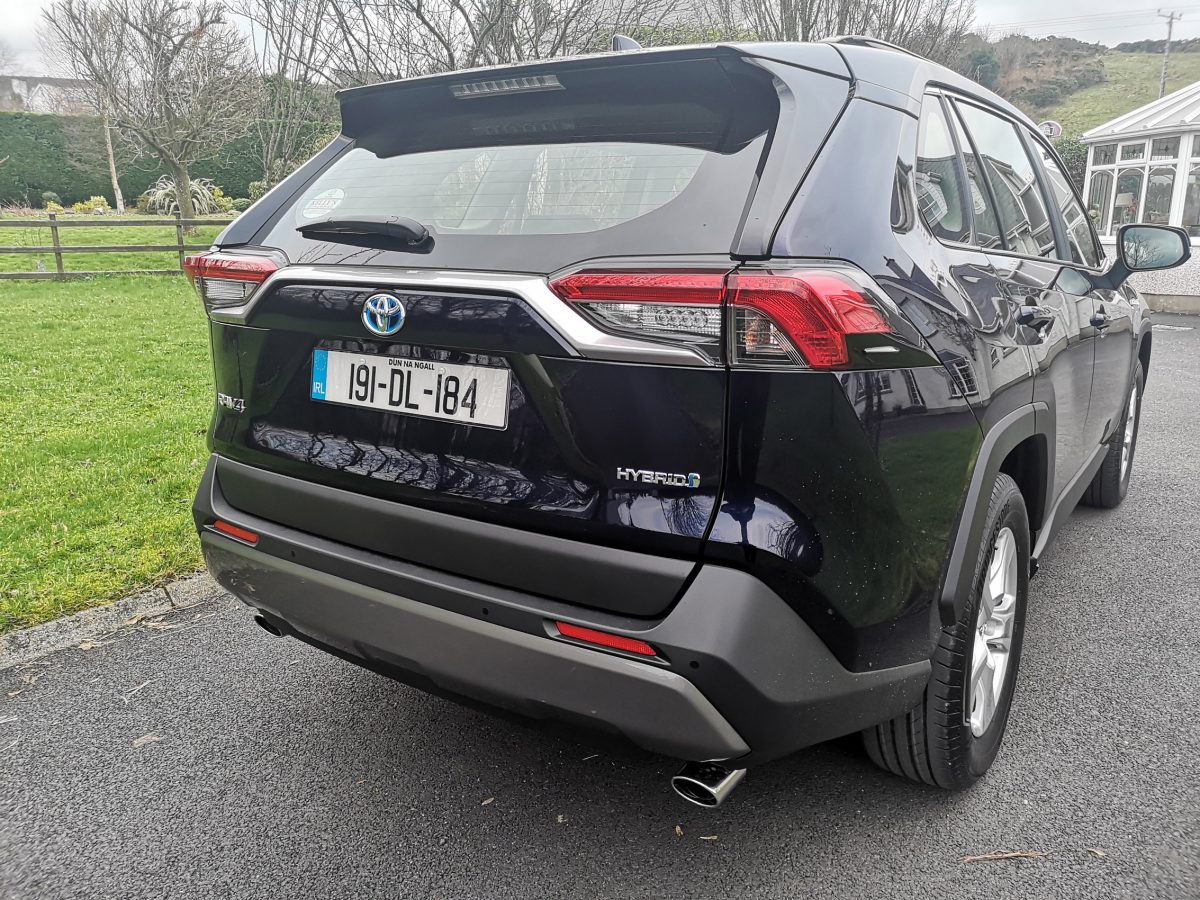 The latest for Toyota in the form of the new RAV Hybrid which we had the pleasure of test driving this week. Photo Brian McDaid.

Not alone that but the present day SUV’s like this are also effortless to drive compared to the original modes of transport thanks to these very well made automatic transmission systems which figures out the most efficient combination from:

There’s a feel-good factor once this hybrid pulls away so quietly from a stationary position you have to remind yourself the odd time this it is, in fact, you who is sitting behind the steering wheel and you are in charge. 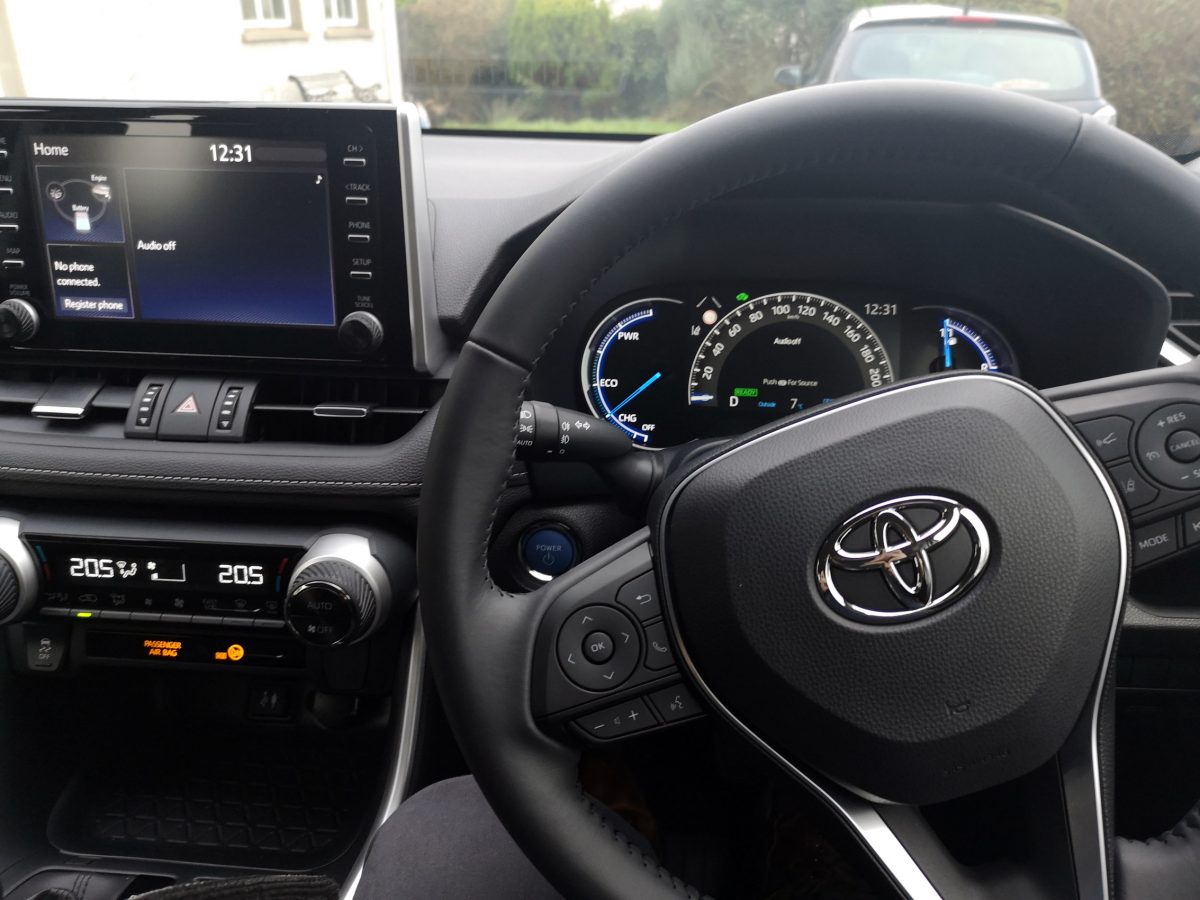 The new RAV has a very robust look to its new shape there’s loads of room for everyone the new RAV prices start at €35,900 and at present is available in two-wheel drive with an all-wheel drive to follow.

The new RAV has something for everyone and every personality type. If you are interested in the current hybrid revolution and its long term benefit to our planet. this new hybrid fits the bill perfectly.

If you’re fond of your bit of power at your right foot, with an eye-watering 218 bhp on tap from its 2.5 petrol engine and electric motor combined.

And after all the demands you still want something that doesn’t drink petrol. This is still the car for you, which will give you well over 40mpg all day every day if you give it any chance at all. 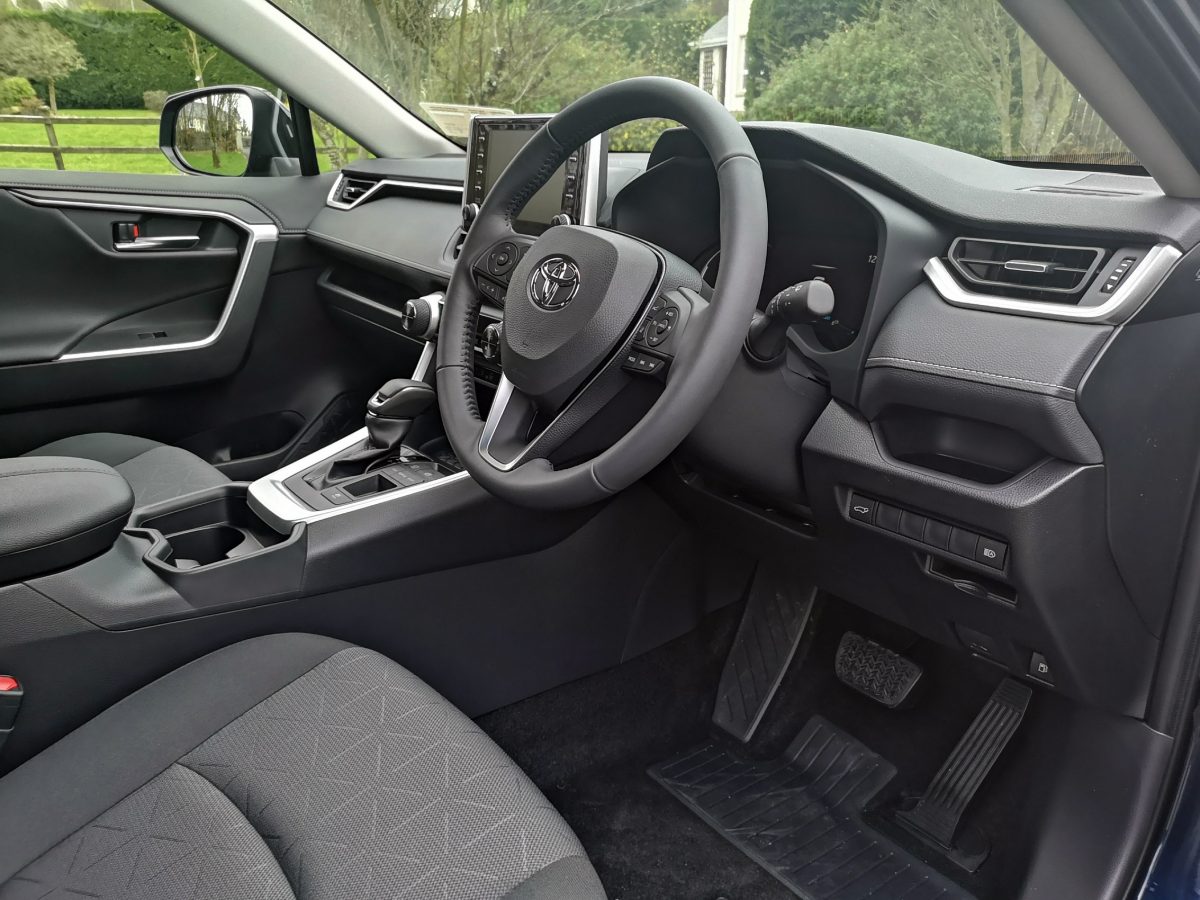 A very functional clutter free interior of the new RAV from Toyota which we were out and about in this weekend. Photo Brian McDaid.

The all-new RAV looks completely different to anything that went before it on the road Its very like the current range of Volvo SUVs a very robust looking outside a theme which follows through into the interior.

The new slightly longer wheelbase is used well to give everybody plenty of leg room inside including those in the rear.

I still call into Benson’s on the Main St. in Letterkenny and have a yarn with Lester Speer the present owner and buy the odd shirt or jumper from him or “a rig” as my granny and great granny would have called them.

I often think about the generations of my mothers and fathers family that have warmed their hands from the old stove in the middle of the shop. Bensons don’t do Hybrids, but Kellys do!

They will have a size that fits the needs of your motoring in the future.

On the 17th of January, This new RAV will be part of a new generation of Toyota’s including the much awaited Hybrid Toyota Corolla.

The new hybrid car will make its way to Donegal for the HYBRID ROADSHOW at the Kelly’s Toyota Garage in Mountcharles 9am to 1pm and Letterkenny 4pm to 8pm where just like Benson’s Kellys will be letting you try on their new rigs for 2019 from Toyota, which will be available to test drive to see it the fit the needs of your present-day driving.