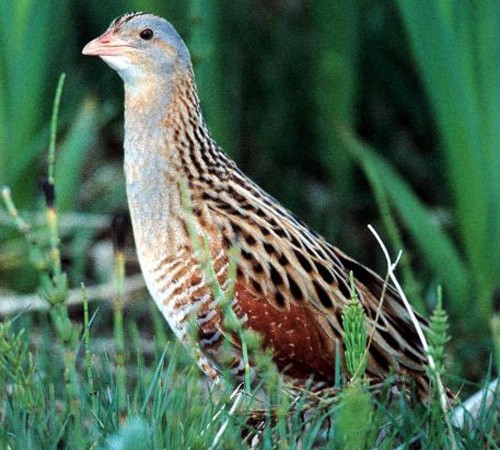 Ireland’s bid to save the corncrake from national extinction is back on track and Donegal is leading the way in its revival.

The project to save the rare bird received a boost last year with the number of calling males increasing by 8 per cent to 151.

The increase, which is being attributed to the warm weather, was the first rise in numbers since 2014.

The elusive bird, known for its rasping call, was once widespread across the countryside, but the population was decimated by mechanised farming as the corncrake nests in meadows.

The Corncrake Project Annual Report for 2018 shows Donegal and its islands remain the national stronghold for the bird, where a total of 90 calling males were recorded last year – 59 of these on the county’s offshore islands.

Another 39 were recorded in Co Mayo, 20 in Connemara and two calling males in Co Sligo.

The report states that no corncrakes were recorded in the Shannon Callows for the fourth consecutive year.

The State last year spent €228,054 on its battle to save the bird from extinction, the report adds. Since 2012, the State has spent €2.4 million on ensuring the bird’s survival here.

The 151 total for last year, however, represents a 20 per cent decline on the 1993 total when conservation measures were first introduced.

Denis Strong, divisional manager with the National Parks and Wildlife Service (NPWS), said the great weather here last summer was a factor in the increase.

The report shows too that 125 farmers shared payments of €118,447 in the Corncrake Grant Scheme last year, with an additional 10 landowners sharing €30,515 in the Farm Plan Scheme.