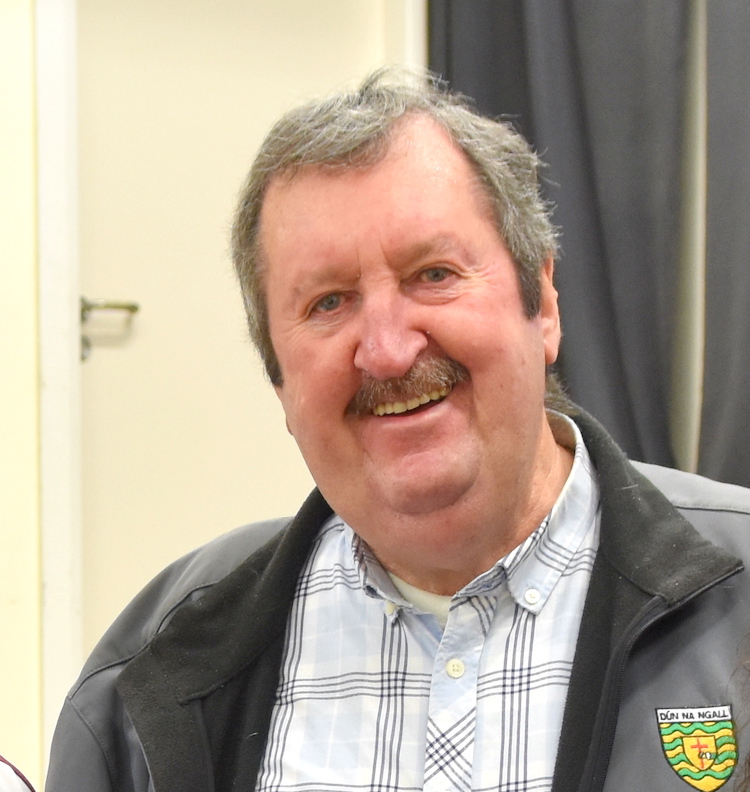 The Termon GAA club has paid an emotional tribute to the late Danny O’Donnell, their club chairman who sadly died yesterday evening.

Danny, a popular figure at all games at his beloved Burn Road and beyond, passed away following a short illness at Letterkenny University Hospital.

Danny spent much of his life in Chicago, where he was established in business and sporting circles.

Since returning to Ireland following the untimely death of his wife, Mary, Danny became immersed in the Termon club.

He became Chair of the Termon ladies board in 2012 before taking over as Senior Board Chair in 2014 – a position he held until his death.

CLG An Tearmann have issued a statement, paying tribute to the late ‘Danny O’.

The news of the death of our Chairman Danny O has cast a heavy shadow over our community and our GAA Club. Over the past week since news of his illness first broke we have been taking strength from the huge volume of messages of support and prayer from all corners of our Country and indeed from abroad. Such was the impression that Danny made on so many people that he met through his various roles within the GAA with the Wolfe Tones GAA Club in Chicago and over the many years with us in CLG An Tearmainn.

Danny was born in Cashleenen, Termon to Annie and Daniel O’ Donnell in 1952. One of 9 children, Danny spent his early days in Cashleenan with his parents, his brothers Jimmy, Pat and John and sisters Margaret, Cathleen, Anna, Rose and Mary. He attended Kilmacrennan N.S and attended secondary school in Cootehill Co Cavan under the mentorship of his brother Father John before returning to Donegal to study Civil Engineering at the  Regional College in Letterkenny.

He then emigrated Chicago where he established himself in the construction and property Industry and set up home for himself, his wife Mary and daughter Jennifer in the Oaklawn district. Danny’s business acumen saw him create a network of contacts and friends in business and political life in Chicago developing a strong rapport with many including former Mayor Richard E Daly.

As well as developing a very successful business Danny established himself as one of the leading GAA figures  in Chicago with The Wolfe Tones GAA club where he served as Chairman for many years. This led him to being a prominent figure in the GAA scene in North America with involvement at various levels with the North American GAA Board. His love for promoting our games in America saw him bring players from all over Ireland to Chicago and helped establish those people both on and off the field. He was at the forefront of the development of Gaelic Park, Chicago and helped make it one of the leading GAA grounds in the USA. He was instrumental in leading the way with innovative fundraising projects for the GAA using his skillsets in the property business to bring big fundraisers together for the GAA community.

He was to the forefront of promoting Ladies football in Chicago and in North America and really was ahead of his time in seeking equal status for ladies and men’s Gaelic games. Through these years he made many friends with those in the most senior office in Croke Park with Joe McDonagh famously visiting Chicago during his tenure as President of the GAA following an invitation from Danny. He was also a close friend of another former GAA President Sean McCague from Monaghan who held Danny in high regard given his involvement at many levels.

Following the untimely death of his wife Mary, Danny decided to return to Donegal to pursue his business interests in Donegal and beyond. While in Chicago Danny always maintained his membership of CLG An Tearmainn and supported every fundraising initiative hosted by our club so it was no surprise that he involved himself with the club on his return.

His initial involvement was with our Ladies Board where he took over as Chairperson in December 2012. In 2014 he took on the role of Chairman of our Senior Board and held the position of Chairperson of both Ladies Board and Senior Board for 5 years. Over the past 5 years he oversaw the development of our new training pitch which was opened last year, the acquisition of additional lands close to An Craoibhin for development into addition training facilities as well as setting up of the weekly Club Bingo in An Craoibhin in early 2017, something that has been hugely beneficial to our Club from a fundraising perspective. Indeed, Danny oversaw the positive restructuring of the club’s finances during the past few economically challenging years. Danny’s vision was to see the best facilities being developed for the Club and its members.

Danny acted as umpire at all home senior games with himself and Kevin McCafferty establishing themselves as a key part of our home fixtures as our official umpires. He gladly helped out our neighbouring clubs Cloughaneely and Downings by umpiring when they hosted the All Ireland Gaeltacht championships in recent years.

If Danny was not at the Burn Road on any evening during the summer, then he was attending one of our Clubs underage or ladies games. He travelled the length and breadth of Donegal to support our teams, boys and girls, ladies and men, and he travelled the length and breadth of Ireland to support Donegal, ladies and men taking huge pride in seeing so many of our players wearing the green and gold of Donegal.

He took tremendous joy following the progression of his own niece Maureen (Mo ) O’ Donnell and nephew Sean O’ Donnell’s footballing careers being ever present with support and words of encouragement.

Danny O encapsulated all that is good about being a Gael and GAA man. He worked tirelessly to promote our games and our culture and encouraged and practiced volunteerism in the very truest sense of the word. As a result he lived the values of the organisation he loved and helped enrich the lives of our members, families and the community in which we live.

We wish to offer our sincere sympathy to his Daughter Jennifer, Son in law Manus, grandchildren James, Lauren and Niall, his brothers Jimmy and Pat, his sisters Anna, Margaret, Mary, Kathleen and Rose his nieces and nephews and the wider GAA family.

Private removal from the Eternal Light Chapel of Rest, Mountain Top, Letterkenny tomorrow, Tuesday January 15th,  at 2pm to the residence of his brother Jimmy at Cashleenan, Termon.

Wake from 5pm Tuesday January 15th. Shuttle bus will be in operation from the Old Termon Bingo Hall.

Removal on Thursday morning, January 17th for Funeral Mass in St Columba’s, Kilmacrenan at 11am followed by private cremation in Cavan.