The parents of two young Inishowen men accused of murder in Australia have spoken of their torment and pain, claiming their sons are innocent of all charges.

Christopher McLaughlin (24) and Nathan Kelly (21) were initially charged with assault following an incident in Sydney on December 29 but the charges were upgraded to murder after Paul Tavelardis (66) died last Sunday.

The duo are currently being held in separate prisons in New South Wales and face life sentences if found guilty.

But their families have told the Inishowen Independent that they are not killers and were defending themselves and their property during the incident that led to their arrest.

Nellie Kelly, the mother of Nathan, says the seventeen days since her son’s arrest have been “worse than a death”.

“We’re not coping with this at all. We’re just completely traumatised by what has happened. It’s like being locked in a dark room. This is hanging over us all the time and we feel it every minute of the day and night.”

“Our boys’ faces are being shown worldwide for murder but we know they know they didn’t do it. They have never been in trouble before and they are not the type of people who would ever do anything like this.” 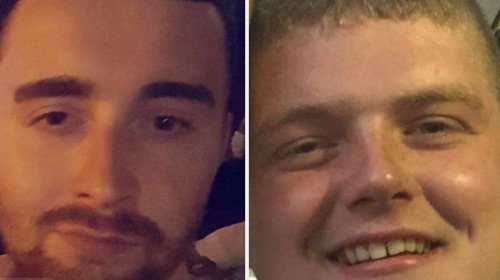 “We feel sorry for the man who has died but there’s more to this. They didn’t set out to harm anyone and we just want them home.”

James McLaughlin is “hoping and praying” that his son Christopher and Nathan will get justice “as soon as possible”.

“We’re totally convinced they are not guilty and we are anxious that they should get bail and be given a chance to clear their names. We want them home and freed as soon as possible.”

Anne McLaughlin says life has been “hell” since she learned of Christopher’s arrest.

“It’s just awful. We have only been able to get through to Christopher on the phone three times and he is very shaken by what has happened. He was set back a lot after he had heard the man died.”

“This has been total hell for us. It’s a nightmare.”

James and Anne “knew something was wrong” when they saw Gerard and Nellie’s car arriving up to their house in Malin Head on the Saturday evening.

The families said Nathan and Christopher left for Australia “to better themselves” on May 20th last year and had been “working away” since their arrival Down Under.

“Their employer out there is standing by them and says they are great boys, who would do anything for you. They would always go above and beyond,” Nellie explained.

Nellie said Nathan had been in touch with his family in Glengad every day via Snapchat or Facebook and she “knew something wasn’t right” after he was inactive on his Messenger app for several hours one day.

“I just got a feeling something was wrong. I remember it was around 12 o’clock at night and I could see he was inactive for two or three hours. I couldn’t sleep and I checked again at 3am and I could see that both boys’ pages were inactive.”
“We thought maybe they got hurt on their scramblers, which they had just got,” added Gerard.

At around midday, Nellie was so worried that she decided to ring a police station in Sydney, giving Nathan’s name and date of birth. It was then she learned that he had been arrested for assault.

Since then, it has been a living nightmare for the Kellys, who run the Fisherman’s Inn pub in Glengad.

“We’re living on anti-depressants and haven’t been back at work since. We know we’ll have to go back because we’ll need the money but we can’t face it.”

“Our house is locked up at home; we don’t want to see anybody. We just want to be on our own because we can’t cope with this,” Nellie said.

The distraught mother becomes emotional as she recalls Nathan, her youngest of five children, ringing home on Christmas Day.

“He’s only a wain. He’s so laid back and easy-going. There’s no way he did this. I just want him home. I want to see him.”

Gerard Kelly last spoke to his son in prison on Sunday night and said Nathan is “very stressed” by what has happened – though the family are telling him to “keep his head up”.

Nellie and Gerard said they are ready to “jump on a plane at anytime” to help their son.

With a trial likely to be up to two years away, both families are facing huge legal and travel costs.

“I feel like selling the house and moving out to Australia to be with him – but we know we have four other children and grandchildren too,” Nellie says.

Small farmer James McLaughlin says he won’t travel out because he has health problems but “somebody belonging to the family” will be there to support Christopher, who worked at Forward Emphasis for two years before emigrating to Australia last summer.

The families have taken some comfort from the support they have received at home too, with plans for a public meeting and a potential fund to help with legal fees.

James says the Malin Head and Glengad communities are fully behind the families.
Una Devlin, an aunt of Christopher, describes her nephew as a “quiet and shy person” who has never been in “any bother”. She says the “ripple effect” of the incident is affecting everyone in the wider family.

“We are trying to be supportive but the not-knowing is very hard. Everyone is so concerned.”

Both families concluded by expressing their condolences to the Tavelardis family in Australia.

Buncrana solicitor Ciaran MacLochlainn, who is liaising with the legal team in Australia, says the murder case will be strongly defended “all the way”.

He revealed the local men plan to defend the case on the basis that they were acting in self-defence after disturbing a man at their jeep on the night of the incident.

“This man came at them swinging a metal pipe and struck Nathan with it. A fight then ensued and Nathan and Christopher got the better of him. Nathan was there at the scene when the police arrived.”

“They were defending their property and themselves, as they had every right to do. This was never a murder,” he claimed.

Solicitor MacLochlainn says Nathan and Christopher were not properly represented initially but hope to apply for bail next week, before appearing in court again in March.

He said the Irish Ambassador to Australia, Richard Andrews, is aware of the case, while a number of politicians are also trying to assist the families.

Meanwhile the family of Paul Tavelardis is “grieving and shocked” after switching off his life support machine nine days ago.

Bradley Tavelardis told the Inishowen Independent that his father had battled leukaemia and heart issues in later years and wouldn’t have had the strength to defend himself.

Two Inishowen men are now before the courts in Australia charged with the murder but Mr Tavelardis says he does not harbour any ill will towards Irish people in his country.

“I have since been contacted by other Donegal locals who have been supportive and I appreciate this. People’s care and concern shows me that there is still good in the world.”

“I have had many messages of condolence from Irish people and I greatly appreciate this. I would also like to mention that during the incident that resulted in my father’s death there were people from all nationalities and walks of life that tried to intervene. In this time of grief it is this that gives me comfort and faith that there is good in humanity,” he said.

Mr Tavelardis described his father as a “man who kept to himself, loved to travel and instilled in us a loyalty to our family and a sense of adventure”.

He said the manner of his father’s death has been a “whirlwind of emotions” for the family and that it had caused “much anger and heartache”.