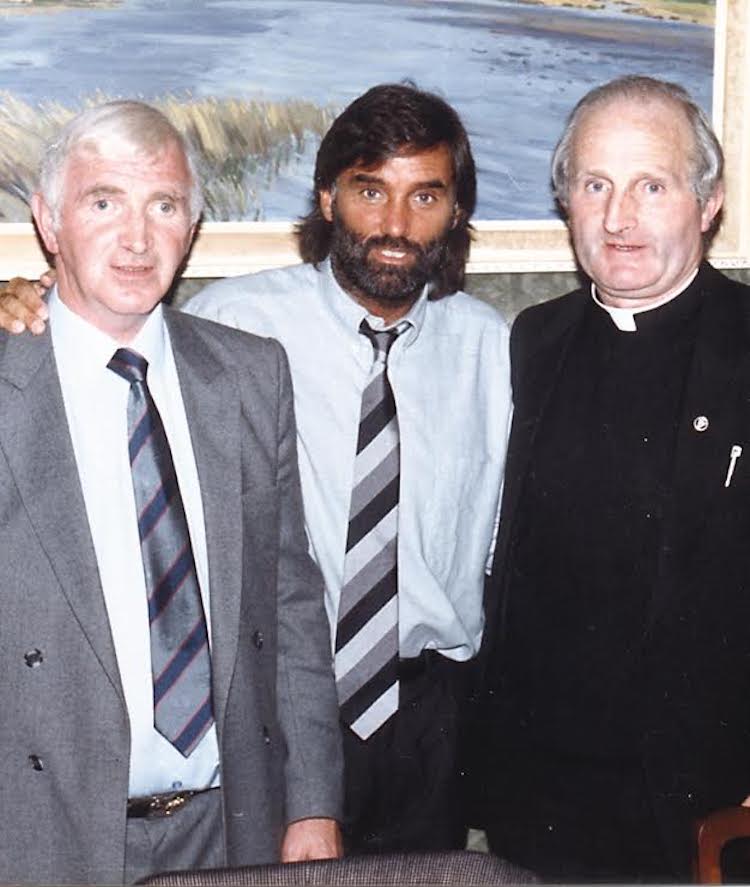 One of the founding members of the Donegal Sports Star Awards Fr. Michael Sweeney is to be inducted into the organisation’s Hall of Fame this year.

‘Fr Mick’is one of the best-known figures in Donegal who came to national attention as a result of his managerial successes with Fanad United and PCC Falcarragh.

Donegal Sports Star Awards Chairperson Grace Boyle said that Fr. Michael Sweeney had made a massive contribution to soccer in the county which made him a hugely respected figure locally and nationally as a result of his successes as a manager.

“Fr. Michael was a founding member of the Donegal Sports Star Awards back in 1976 and is our Honorary President so it gives our committee great pleasure to make him an inductee in to our Hall of Fame at the presentation function in the Mount Errigal Hotel on the 25th of January,” she said.

“Fr. Michael had a great ability to pick out players that worked well together in teams. He gave the boys at PCC Falcarragh great opportunities to achieve on the football field.

“PCC won three national titles in the space of five years and those really great memories will never be forgotten by those involved in the teams.

“Fr. Michael also had so much success managing Fanad Utd sides for nearly 20 years in Donegal Junior League and USL. It was a huge commitment and he managed that along with his very busy life of pastoral duties.”

In a five-year period between 1978 and 1982 he managed PCC Falcarragh to three FAI All-Ireland Schools titles which included two U16s Cups and a senior crown that saw the small rural team selected to represent the Republic of Ireland at an international tournament in Belgium in 1983.

His unique motivational skills were legendary as was the gift he had to make players believe that they could achieve on the football field. While national successes naturally take the headlines, his remarkable list of honours while at the helm of Fanad Utd over a 20-year period will probably never be surpassed.

A string of Donegal Junior League titles followed by a near total domination of the Ulster Senior League during his reign in charge will go down in history.

Fr Mick was able to spot players with talent and mould them into successful sides.

In every great team there is that one exceptional footballer that just provides those moments of genius, often making difference when it comes to significant success stories.

At Fanad Utd he had two such players the late James Doherty in the 1970s who was succeeded by Fr. Mick’s nephew John McElwaine from the mid-1980s.

Over a dozen of his players featured in the League of Ireland with Finn Harps. McElwaine, keeper Bosco Gallagher, Charlie McGeever and Eddie McGinley were among those who played senior soccer.

Two of his PCC Falcarragh stars John Cunningham and Barry McGowan went onto to win All-Ireland Senior GAA titles with Donegal in 1992. Four years earlier McGowan had also been a member of the FAI Intermediate Cup winning Fanad Utd side.

Despite his busy footballing life he was also an extremely busy and much loved cleric in Gweedore where improving the lot of the local community was his number one goal. That was demonstrated by his pivotal role in the building of the Arus Gaoth Dobhair Nursing Unit. Back in Fanad many years earlier he had been a key figure in the development of the Community Centre at Traighalough.

Fr Michael had an unbelievable drive to get things done. He was the man that came into a meeting and gave a clear direction regarding purchasing the field at Ballyare for the Donegal Junior League.

Today the excellent facilities at Diamond Park are a testament to his vision and leadership skills. He had that ‘can do’ manner.

Among his most memorable achievements as manager was when Fanad defeated Derry City 3-2 at the Brandywell in the League Cup with his nephew Johnny Kelly getting two of the goals. And they were only beaten then at the semi-final stage by Shamrock Rovers. That was some achievement for a small rural club in the late 1980s.

Prior to that and after many attempts Fanad finally also won the famous Buncrana Summer Cup for the one and only time.

Fr. Mick highlighted winning the FAI Youth Cup Final in Ramelton in 1979 as a very big breakthrough on the national stage and of course defeating Derry City at the Brandywell was definitely another occasion that was ‘right up there’ and he acknowledged that the 1988 Intermediate Cup triumph was arguably his biggest success as a football manager.

The Fanad priest had a fantastic career in football management.

Fr. Mick had that rare ability to continually recruit talented players and mould them in successful sides that achieved locally and nationally. The reunion in September 2016 recognised his legacy to the game and the organisers at the time Paul Anthony McFadden, Johnny Kelly and Ben McBride were delighted with the turnout.

Now, there is another opportunity to mark and honour the remarkable sporting life of Fr. Michael Sweeney when he is inducted into the Hall of Fame at the Donegal Sports Star Awards on Friday the 25th of January in the Mount Errigal Hotel.

It’s fitting that he should be the 43rd inductee having been one of the founding members of the organisation in 1976.