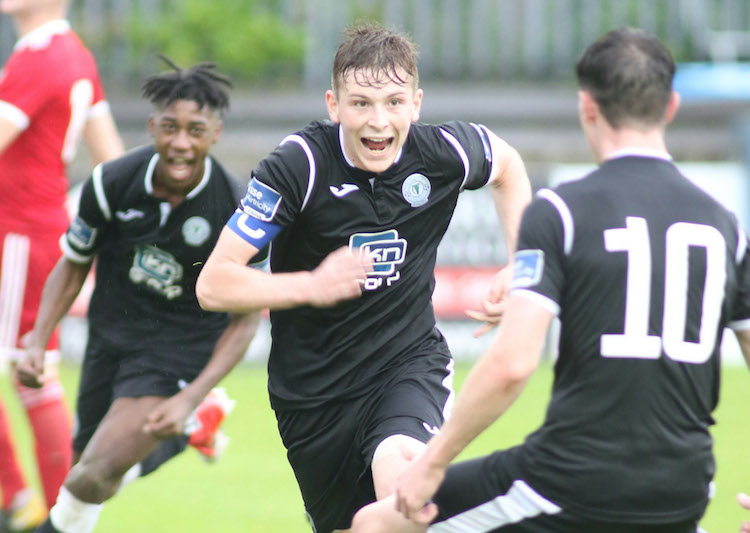 SSE Airtricity U17 player of the year Daragh Ellison is included in an 18-man Republic of Ireland Schools panel for a friendly against Australia on Saturday.

Ellison – pictured by Joe Boland, North West News Pix – is among those selected for duty for the fixture at Home Farm (1pm).

The Irish Schools side is managed by William O’Connor of Cockhill Celtic, who is a coach at Finn Harps, while Harps manager Ollie Horgan is performance analyst with the Irish Schools squad and Milford’s Mickey McGlynn is the physio.

Carndonagh’s Lee McLaughlin misses out through injury, but Ellison will carry the Donegal flag in the squad alongside Corey McBride and Jack Doherty – both from Carn CS.

Ellison had a fine campaign with Harps’ U17s last year, winning the League and Cup double before scooping the Player of the Year gong. Last night, he featured in Harps’ 2-0 pre-season friendly win over Galway United.

Ellison will now aim to make a mark at international level – starting with Saturday’s game.

This will be the eighth occasion these two teams have met in the last 19 years. The visitors have enjoyed the upper hand in proceedings thus far with an impressive record. Ireland have only won once, drew twice and lost four times in their previous outings against the southern hemisphere side.

The Republic of Ireland’s Centrneary Shield title defence will commence on March 28 as the team travel to Somerset Park, home of Ayr United FC in their opening game of the SAFIB Centenary Shield series against the tartan army.

The Republic of Ireland will then enjoy three games on the bounce during the Easter Break as they line out against England on April 12 in Dublin.

O’Connor’s crew will then make the short journey to Belfast to take on neighbours Northern Ireland on April 18 in their penultimate clash of the season. The scholars will be hoping that they’re still on a solid footing for their final showing which will see them entertain Wales on April 25 in Dublin.