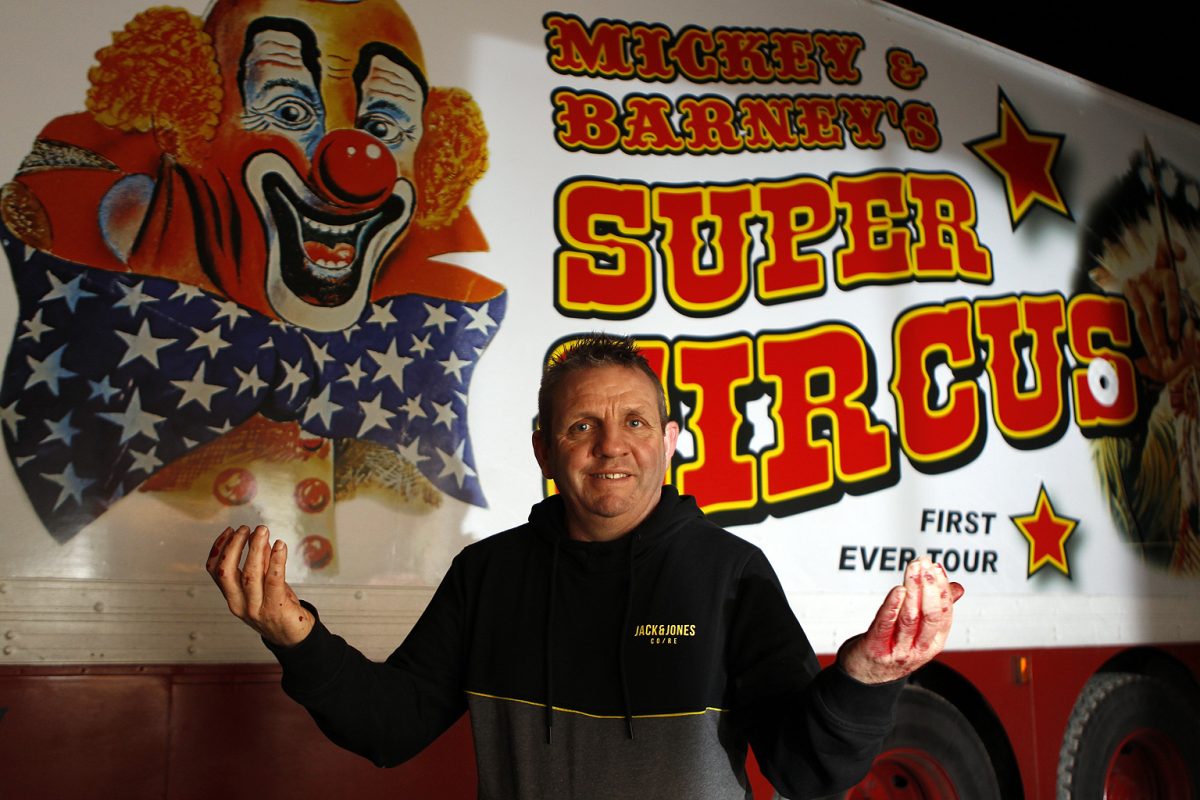 DD Motoring: From Roller to ‘Roll Up’

Donegal Motoring columnist Brian McDaid takes to the road this week with a Letterkenny family as they embark on a journey of a lifetime as the get ready to make a lifetime dream come true.

A fleet of brightly painted ERF trucks with Mickey and Barney’s Super Circus painted in bold writing on the sides as they prepare to embark on a tour as a travelling circus.

Names in lights, Mickey and Barney a Letterkenny based Super Circus gets ready for the road this week Photo By Brian McDaid.

The first show begins in their home town at the end of this month followed by a gruelling ten-month tour of the towns and villages and cities of Ireland.

Eleven-year-old Lativia Kearns eyes says it all. She sits with her family around the kitchen table inn anticipation overlooking her native, Letterkenny.

Laticia Kearns pictured in her family home looking forward to her family first ever tour as a Circus starting of in their home town of Letterkenny on the 30th of January Photo Brian McDaid.

Outside her front door, two of the massive circus trucks are looking fantastic and ready for the road. Her name is in big capitals on the bumper of one of them “Princess Lativia”

All the Super Circus fleet of trucks are named after both families children as they prepare for a journey of a lifetime with their very own Circus. Photo Brian McDaid.

At the end of this month, Lativia’s  family will make the short journey into the town for the first ever showing of their own family Circus.

I have a dream

Lativia’s father Bernard a native of Raphoe left the tech in the town at the age of 13 and spent the next 35 years working in the tar macadam business.

I have a dream.
Bernard Kearns, Letterkenny finally makes his dream come true as he embarks on his first ever tour starting at the end of this month on January the 30th in Letterkenny and touring around Ireland to November 2019 as the owner of his very own circus along with business partner Michael McCrory. Photo Brian McDaid.

At the end of this month he will make his life long dream a reality as he puts the final coat of “International Red” on the trucks this week and will park up his tar macadam roller and will be calling “ROLL UP” “ROLL UP” as joint owner of his own circus for its first public appearance in Letterkenny.

Michael McCrory and Bernard Kearns are the business partners behind this venture which takes to the road  at the end of this month. Micheal McCrory originally from Newcastle in Co. Down has worked with the circus all his life and has travelled around the world with all the big names.

Ready to roll.
Two of the five fleet of ERF Circus trucks sitting ready to roll which Bernard Kerans and Mickey McCrory believe is the first circus of its kind to be based in Donegal. Photo Brian McDaid

There isn’t a job big or small that Micheal hasn’t done in the last 25 years in the circus industry. He even started his own circus a few years back and has learned from the mistakes made and with that valuable knowledge he is ready to hit the road again.

The  fleet of classic ERF trucks have all under gone a big overhaul over the last year or so. Some were purchased from Mohan’s Amusements and would have carried the Dodgem or bumper cars  and have now been completely remodelled to carry the Big Top tent which Micheal and Bernard travelled to the Chez Republic to purchase in March last year.

Once that was loaded up and transported back to Ireland these friends knew there was no turning back.

Life is a circus

Just like the walk across the wire is for a tightrope walker, our lives will be most successful if we find balance. Lean too far in one direction and you’ll find yourself toppling over.

Balance is not always easy to master when juggling relationships , jobs or passions, but it’s essential for living a positive and present life. Imagine yourself on a tightrope and ask yourself, “Am I leaning too far in one direction?” Don’t let one area of your life — no matter how important it might seem — distract you from achieving your balance.

Bernard and Jennifer Kearns, with their children Laticia, Arron and Keva as they prepare for a journey of a life time as they take their very own super Circus on a tour around Ireland. Photo Brian McDaid.

On the 30th of January Bernard Kearns and his family will go from following and helping out in the running of different circuses for the year and will throw his hat into the ring to play the biggest part in his life of running and owning his very own circus.

Some of  the acts  from Ireland and Europe have all ready arrived in Letterkenny and are working  together to make this new Circus a success.

The big Top tent will take a good four hours to assemble and the community that is a travelling circus will set up home opposites the council offices in Letterkenny.

One of Mohan’s Amusements old trucks which has undergone a big overall and is fitted out to carry the 400 seater BIG Top Circus tent for Mickey and Barney Super Circus. Photo Brian McDaid.

Its a massive step for Bernard and his family to get up on the parapet in his own native county and announce that his Circus will be coming to town.

There are those of us that may never do anything as brave in their life (but wish they could) but end up sitting high up in the stand and just judging the show.

DD Motoring: From Roller to ‘Roll Up’ was last modified: January 16th, 2019 by Brian McDaid