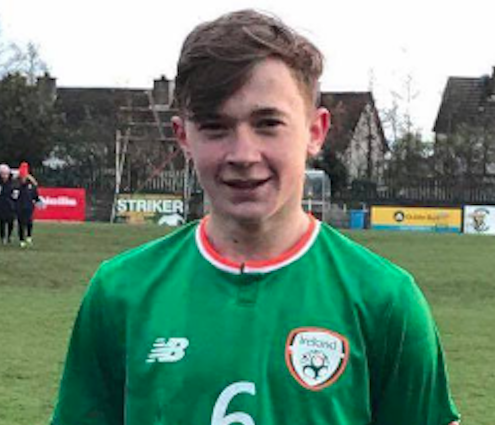 Ben McCormack and Colin Conroy scored in the second half to give Paul Osam’s side a well-deserved win in front of a large crowd that included High-Performance Director Ruud Dokter, Ireland Under-21 manager Stephen Kenny, U-17 head coach Colin O’Brien, U-15 head coach Jason Donohue, and Colleges & Universities manager Greg Yelverton.

Ireland started the game strongly with Sinclair Armstrong and Dylan Gavin having chances to test visiting goalkeeper Ryan Del Nido. Despite numerous opportunities, Ireland were unlucky not to score before the break.

Coyle was replaced after 51 minutes, only to be reintroduced for U16 captain Gavin O’Brien after 65 minutes as Paul Osam’s side going on to double their lead.

McCormack gave the home side the lead in the 51st minute. His free-kick from the edge of the box found the bottom right hand corner.

Coyle replaced U16 captain Gavin O’Brien after 65 minutes as Paul Osam’s side went on to double their advantage five minutes later.

Conroy found the back of the net after brilliant work from substitute Calum Kavanagh.

Speaking after the game, Under-16 Head Coach Paul Osam said the team need to be more clinical in front of goal.

“We had lots of opportunities but didn’t take them. Better opposition won’t give us as many chances as we had today. We need to be ruthless,” said Osam.

“Despite losing 3-0 last week to Germany [last week], I was probably happier after that game than I am today, even though we won the game.”