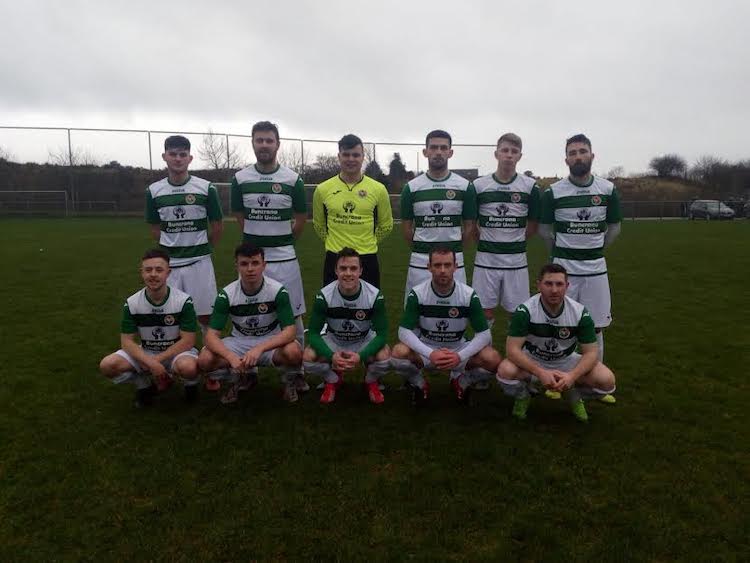 It was hard-earned and, you could argue, scarcely-deserved, but Malachy McDermott headed Cockhill Celtic back to the top of the Four Lanterns Ulster Senior League.

By Chris McNulty at The Charlie O’Donnell Sports Grounds

The champions showed all their experience to pull the ashes from the fire here after Deano Larkin had cancelled out Gerard McLaughlin’s early opener.

Larkin’s goal drew Bonagee level 12 minutes into the second half.

But it was Cockhill who, in a game of inches, nudged themselves in front – and onto the summit – when McDermott found himself in a little pocket of space in the 67th minute.

Gerry Gill’s corner was the invitation and McDermott arched his neck back and fed a perfect header beyond the reach of David Tyrell in the Bonagee goal.

It was a goal that could well prove precious and priceless as Cockhill continue their quest to win the USL for a seventh successive season.

They won here with the likes of Jimmy Bradley and Laurence Toland absent, though both can be expected to return for next weekend’s crunch battle with challengers Letterkenny Rovers.

Bonagee had designs on breaking into that duopoly, too, but Jason Gibson’s men fell just short here – their third one-goal defeat against the ‘big two’ this season.

Cockhill led after just three minutes, McLaughlin wriggling clear to steer home from Gill’s teasing delivery at the near post. The corner arrived when Tyrell brilliantly turned over Benny Fildara’s raking effort with his fingertips, with the crowd just settling into their places and expecting the net to bulge.

The powerful Darren McFadden, who ploughed an often-lonely furrow in the Bonagee attack, did beat McColgan with a header, but his effort was cleared from beneath the crossbar.

That came just after Bonagee were denied a penalty after McFadden had his heels clipped as he powered through. The match officials conferred briefly and a free-kick, right on the edge of the penalty box, was given, with the visitors livid.

Down the other end, Cockhill seemed to have justifiable claims of their own but their appeals, too, were waved away when McDermott went to ground.

Right on the stroke of half-time, McFadden, just, failed to connect properly with a clever free-kick delivered by Michael Funston.

Ryan Rainey headed wide from a Jamie Lynagh ball in before Bonagee did plant themselves onto an even-keel. Micheál Doherty and McFadden worked the opening on the left and Doherty whipped across with Larkin wonderfully nodded beyond McColgan for the leveller.

It was set up for a grandstand last half-an-hour, but the experienced McDermott – so vital for Cockhill throughout their golden period in the previous six campaigns – stepped forth with the game’s big moment.

Bonagee were reduced to ten men in the closing moments when Mark Harkin was shown a second yellow, though Bonagee full-back Lee McColgan, earlier booked by ref’ Marty McGarrigle, could count himself fortunate to escape further sanction for a second-half foul that ordinarily might’ve been expected to draw a booking.

Cockhill wound the clock down and they now look down from a familiar fantage point at the top.