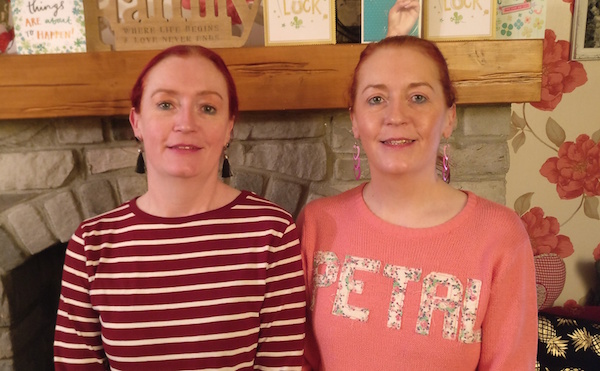 A Donegal woman has been selected to appear on the National Lottery Winning Streak TV Game Show on RTE One – ten years after her identical twin sister appeared on the show!

In what is an incredible coincidence the Collum sisters, from Falcarragh, are still coming to terms with their “Twinning Streak” with the entire community joining in the excitement.

The sisters were blown away when the name of her identical twin, Maggie, was pulled out of the Winning Streak drum a decade later to appear on the show tomorrow night.

However, Maggie has decided to shun the limelight and has asked Rosie to appear on her behalf on the show this weekend – making it a double appearance for her in ten years!

The “twinning streak” story has captured the imagination of locals in Falcarragh and the sisters have been treated like celebrities this week.

According to Rosie a simple trip to the shops, which normally takes a half hour, is taking three! She is thankful and appreciative of all the attention and congratulations messages from her neighbours in the community.

In fact, a huge gang of friends will gather at their local pub, the Corner Bar in Falcarragh will gather to watch the show on Saturday evening.

When Rosie appeared on the show a decade ago she had just bought a house and used her winnings to furnish it. Rosie was sitting in the same house with her twin Maggie and their mum, Annie, watching Winning Streak last Saturday when, to their shock, they heard Maggie’s name get pulled out of the drum!

The three, who are all proud Gaeilgeoirs, made a lot of noise in celebration and excitement and pretty quickly Maggie decided that she would shun the limelight and let her sister play in her place – after all, she has done this before.

The Winning Streak National Lottery game show, co-presented by Marty Whelan and Sinead Kennedy, will feature some perennial favorite games as well but also brand new games including Play or Pay, Roll for Riches, WinFall and Electric Dream – where one player will win an electric car worth €25,000.

As ever one of the lucky five players will get the chance to spin the wheel and win up to €500,000. But this series a €100,000 segment will be added to the iconic Grand Prize Wheel every show if less than that was won in the previous show, improving players chances to win a massive prize.