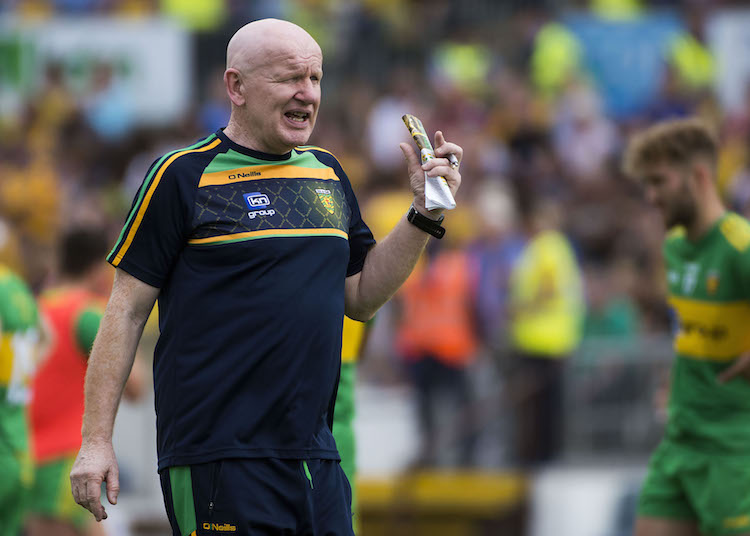 Bonner’s ‘balancing act’ proving a challenge ahead of Clare clash

Declan Bonner admits that preparation for the 2019 League has been a ‘balancing act’ as he juggles the college commitments of players from an already-truncated squad.

Bonner remains without the Gaoth Dobhair contingent, as they prepare for their All-Ireland Club SFC semi-final next month, while Michael Murphy and Frank McGlynn won’t be welcomed back to the fold until after the break in the League.

The Donegal boss has previously questioned the idea of introducing a backdoor system to the third level competitions. The staggered nature of those fixtures has posed difficulty for inter-county bosses like Bonner.

“It’s difficult now with the way the third level competitions are on; very difficult,” Bonner said ahead of Sunday’s trip to Clare, as Donegal begin life in Division 2.

Among Bonner’s men in action over the last week, Ryan McHugh and Eoghan Ban Gallagher were involved with Ulster University in the Sigerson on Sunday, while Michael Langan and Peadar Mogan were with LyIT on Tuesday evening in the Trench Cup and Jamie Brennan was in Tralee with IT Sligo on Wednesday.

Bonner said: “We have a lot of players away at college, in all corners of the country. They’re all playing at different times.

“You have games through a week, which was always the case, but now there are Sigerson games at the weekend. There is so much going on, the whole thing just becomes a balancing act.”

Donegal got out of their group in the Dr McKenna Cup before losing to Armagh in a semi-final in Omagh.

Bonner says he has ‘faith’ in his young guns to deliver the goods in the League.

He said: “The young players will get a good few games in the National League now. It’s exciting for them to be involved and it works for us trying to build a strong squad.

“The more experienced boys weren’t about for the McKenna Cup, but we were really impressed by the attitude of the young lads and by how they went about their business.

“There’s no doubt the McKenna Cup was good for us. We have faith in the young guys coming up.

“The McKenna Cup moved those guys on, but we still have a good nucleus of men that have been around for four or five years, even though the average age is about 22 or 23.”

Clare won the McGrath Cup this month and Keelan Sextan hit 1-10 during the week as University of Limerick defeated DIT in the Sigerson.

Bonner said of the trip to the Banner: “Clare is a new challenge for us. They won the McGrath Cup and they’ll be looking forward to welcoming Donegal to Ennis, I’m sure.

“It’ll be a different challenge for us and we’re expecting Clare to be physically very strong. We have our homework done on Clare and we know they won’t be easy.”

The Donegal boss said: “We just want to win whatever game is put in front of us.

“Realistically, will we win all our games? I don’t know, but we want to start with a win. Of course, we want to be in Division 1 with the top eight teams.

“We’re in Division 2 for a reason and this is where we’re at. Ideally, we want to be in the mix, but we’re taking it one game at a time.”