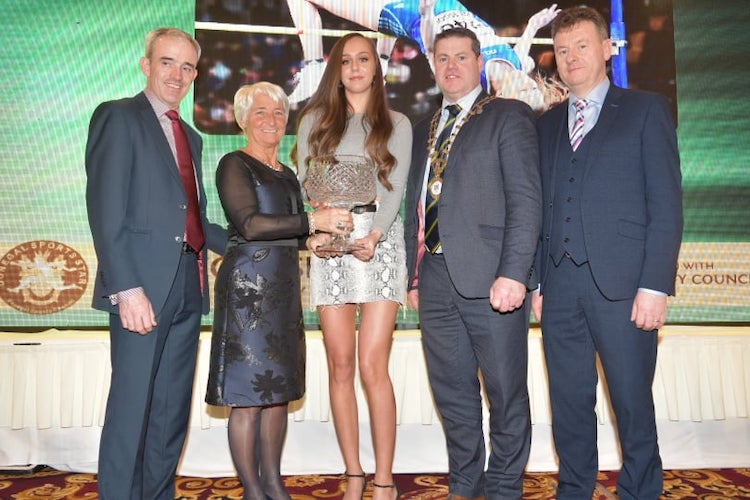 Sommer Lecky is named 2018 Donegal Sports Star of the Year

Finn Valley AC high jump star Sommer Lecky has been announced as the 2018 Donegal Sports Star of the Year.

Lecky was crowned with the top award in front of over 600 guests at the Mount Errigal Hotel at the 43rd Donegal Sports Star Awards function.

At the World U20 Championships in July, Lecky leapt into a whole new world, when she won a silver medal.

Lecky shattered her own personal best and the Irish Junior record as she cleared 1.90 metres at the Ratina Stadium in Tampere, Finland.

Previously having soared over the bar at a new best of 1.87m, Lecky went even better to secure a precious silver nugget.

“I went there with no expectations,” Lecky said.

“I just wanted to compete as well as I could.

“It’s always good to break records, but I just want to keep jumping higher and higher and see where that takes me.

Earlier in 2018, Lecky – who is still only 18 – finished tenth at the Commonwealth Games in Australia.

Lecky’s magnificent year also including a win at the Belfast International Meet, she was the gold medallist at the Bauhaus Junior Gala and was victorious at the Irish Indoor Championships.

And what’s next for Lecky? “I just want to keep raising the bar, keep enjoying my sport and inspire young people along the way.”

Lecky was presented with the award by special guest, the horse racing legend Ruby Walsh. The 12-time national hunt champion jockey saddled 2,500 winners – 58 of them at the Cheltenham Festival – and won two Grand Nationals (2000 with Papillon and 2005 on Hedgehunter).

Lecky becomes the third Finn Valley AC member to win the overall award, following in the footsteps of Sean Carlin in 1981 and Danea Herron in 1985.

Unbeaten middleweight boxer Jason Quigley took the International Achievement prize after win over Daniel Rosario and Freddy Hernandez in 2018. Quigley’s win over Hernandez saw him retain the NABF middleweight title and took him to 15-0 (11KOs) as a pro.

Trentagh-born jockey Martin Harley landed his latest winner as he was named the Professional Sport Achievement winner. Harley rode a remarkable 87 winners in the 2018 calendar year.

Finn Harps manager Ollie Horgan took the Coach of the Year accolade after leading Harps back into the Premier Division, while Ulster and Donegal SFC winners Gaoth Dobhair were named Team of the Year.

Former Republic of Ireland goalkeeper Shay Given was announced as an ambassador for the Donegal Sports Star Awards tonight.

In a recorded video message, Given urged the young sports stars of the county to ‘dream big’.

He said: “I represented the county and the country and playing in the Premier League was a dream come true.

“You have to dream big. You can follow your dreams.”

The Chairperson of the Donegal Sports Star Awards, Grace Boyle said: “2018 was a fantastic year of sport in Donegal. We have over 40 categories tonight. It is a great achievement to be nominated.

“It is a night to celebrate participation and volunteerism.”