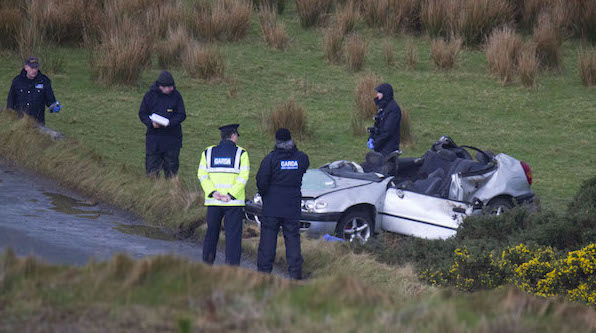 Four friends killed in a horrific car crash in West Donegal last night were saying goodbye to each other as one prepared to start a new job abroad next week.

Pals John Harley, Shaun Harkin and Mícheál Roarty were out with friend Daniel Scott who was due to leave for work in Denmark next week when tragedy struck on Sunday evening.

The four pals killed when the Toyota Corolla car they were travelling in left the road near Magheraroarty around 8.40pm.

It is understood the car flipped over onto its roof and that all four young men were killed instantly following the crash which happened in the townland of Gleannhulaigh.

The deaths of the four young men has sent shockwaves through West Donegal and through the heart of the local parishes from where they come.

All were involved in the local community including being members of both local soccer and GAA teams.

Gardai immediately sealed off the road on Sunday night following the horrific crash on the rugged country road between Gortahork and Gaoth Dobhair.

The emergency services were on the scene within minutes but all four men were pronounced dead at the scene a short time later.

Gardai placed a cordon on the road and relatives began to arrive at the scene of the horrific crash as news of the tragedy began to filter through the community.

“To look down into the valley where the accident happened and to see the sirens and to go to the scene was just the stuff of nightmares.

“Two communities had been plunged into sadness by what had happened. Words fall silent.

And then relatives of those in the crash began to arrive and we just stood there and hugged,” he said.

Fr O’Fearraigh also spoke of the resilience of the local community and how they will come together in the coming days to rally behind the families of those who have lost loved ones.

He also paid a special tribute to all those in the emergency services who were sometimes forgotten in such grief and trauma.

The Garda leading the investigation into the crash has appealed for information about the movements of the men’s car before the tragedy.

Speaking at a press conference at Bunbeg Garda station, Superintendent David Kelly appealed for any sightings of the car before the crash or throughout the day.

He said “When Gardai attended the scene they found one vehicle which was Toyota Corolla, hatchback, silver in colour and it was off the road. There were four casualties.

“Also in attendance was the HSE ambulance service and our colleagues from the Donegal County Council fire and rescue service.

“As you can imagine it was nine o’clock at night and it was dark. It was a tragic scene. Family members arrived and so there was good work done by all the emergency services in difficult conditions.

“I would like to sincere, on behalf of the Gardai and my other colleagues, to offer my sincere condolences to the family, friends and the community after this tragic incident.

“I would like to make an appeal to the public and to the local community. If anybody saw that silver Toyota Corolla 01DL travelling in the direction of Magheraroarty yesterday evening (SUN) prior to 8.40pm or indeed earlier in the day please contact the Gardai at Milford Garda station,” he said.

Principal of Pobolscoil Chloich Cheannfhaola in Falcarragh, Ms Meave Sweeney said three of the four young men killed in the crash would have attended the school at different stages with Shaun Harkin and Daniel Scott being in the school together.

She told RTE “They were three lovely lads, gentlemen is how we would describe them, many people have fond memories of them this morning, staff members, people in the school community.

“It certainly is devastating for the whole school community this morning. It has been heart wrenching. Our thoughts and our prayers are with the families at this time because it’s unimaginable what they’re going through at this moment.

“One of them has a brother still attending the school and the others have cousins and friends here in the school. This is a small school, 460 students, it’s very much a family, it’s a community school, they would have been regarded as our family. They would have strong connections in the area.

“John Harley would have been captain of the local GAA team, as did Daniel, he played gaelic as well and Sean would have strong connections with the local golf team because he would have played golf, soccer and gaelic in our school.

“They took those gifts and talents with them into the local community as well while they were here. It’s a huge devastating impact for the GAA and the local soccer team.

“This morning we gathered the whole school team together and then what we did was we, as a school community, we got together and we resorted to prayer for the students, for the past pupils, and for their families at this time.

“That’s how we get through these things, through prayer and positive thoughts for those past students and for those families.”

Several functions due to take place across the county including the launch of the Donegal Tourism Brochure were cancelled as a mark of respect to those who died.

Prayers were said at local masses throughout the county while at Cloughaneely GAA Club on the outskirts of Falcarragh, a special meeting of wellbeing was held today for those who were affected by the crash.

Among those who attended was Donegal GAA player Jason McGee who had lined out for his county against Clare in Ennis in the National League the previous day.

Fr Sean Ó Gallchóir, parish priest in nearby Gortahork, said some prayers at the meeting which was attended by about 25 people.

“We reflected and said some prayers and the well-being officer at the club said if anybody needed help to contact him,” said Fr O Gallchoir.

Sinn Fein Deputy Doherty said there was a cloud of sadness over the area.

He said “Thoughts and prayers are with those involved and their families”.

Fianna Fail Deputy Pat the Cope Gallagher said, “The whole community has been left reeling in the aftermath of this tragedy. It is shocking to think that four young men, with their whole lives ahead of them, have died in this horrific incident.

“My thoughts and prayers are with the families and friends of these men. I know the community will rally around the families over the tough days and weeks ahead.

“I would like to pay tribute to the Gardaí and the emergency services and first responders, who arrived swiftly on the scene and tended to the victims.

“I wish to express my deepest sympathies to the families and friends of the four young men.”

Donegal County Council convened its meeting for an hour as a mark of respect to the young men while Cathaoirleach of the council, Cllr Seamus O’Domhnaill, who is from Falcarragh, said a black cloud has descended on West Donegal following Sunday night’s accident.

He said the four victims were the perfect example of fine members of the community.

He described them as “four very popular young men, very polite and very good in every way they operated.”

“These men very active in their communities and deeply involved in all facets of sport in Cloughaneely and Gaoth Dobhair,” Cllr O’Domhnaill said.

“They were widely known in West Donegal, from Creeslough right through to the Rosses. They were four great young men that would epitomise everything you’d want to have in your county by way of young men.”

Cllr O’Domhnaill said the community has united in mourning and in support of the families:

“I know, having spoken and taken phone calls this morning, how supportive Donegal will be, from the HSE to the Council, and anybody associated with anything in the county, they all want to lend their support.

“The GAA clubs are coming together this morning because it affects many members of GAA clubs because of their involvement in them.

“It’s devastating for four young lives to be taken so quickly and so tragically. It will leave an awful dark, black cloud over West Donegal and one that won’t go away too easily.”

The four deaths bring to 10 the number of people who have lost their lives on Irish roads over the last week.

Cllr O’Domhnaill said the recent tragedies bring back devastation to many communities.

“In recent weeks, we know in Donegal of a number of tragedies, and indeed nationally.

“We thought we were getting over the road traffic collisions but unfortunately this brings it all back to bear for every family in the county that has lost somebody through a traffic collision or accident.

“Unfortunately there are four more families and wider communities that are affected. We must remember them, sympathise with them and be there for them into the future,” Cllr O’Domhnaill said.

A full investigation into the exact circumstances surrounding the cause of the crash is being undertaken.

The road where the accident happened reopened this afternoon and the remains of the ill-fated Toyota Corolla car was taken away for further examination by Gardai.

Funeral details for the four friends are expected to be released shortly.

Tragic pals were saying goodbye to each other as one prepared to start new job was last modified: January 29th, 2019 by Stephen Maguire